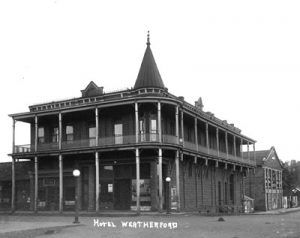 When Arizona was just a territory and vigilantes ruled the dusty streets and trails, in rode John W. Weatherford to Flagstaff, Arizona. Having a grand vision for Flagstaff, Weatherford soon began to build what would become known as one of the finest hotels in the West. Opening on New Year’s Day, 1900, the luxurious hotel would attract such visitors as newspaper tycoon, William Randolph Hearst, former President Theodore Roosevelt, Old West author, Zane Grey, and lawman, Wyatt Earp.

After his luxury hotel was complete, John Weatherford built the Majestic Opera House, which opened in 1911. When it burned down in 1915, Weatherford was not to be deterred and rebuilt his theater, this time calling it the Orpheum, which continues to stand today.

In the early part of the 20th century, watercolor artist Thomas Moran spent many nights at the Weatherford hotel while he completed his sketches of western landscapes. These works of art were partially responsible for moving Congress to preserve such places as the Grand Canyon and Yellowstone as National Parks.

Over the years this historic building served a number of purposes, including Flagstaff’s first telephone exchange company, a number of restaurants, a theater, a radio station, and a billiard hall. Today, it has been fully restored and again caters to Flagstaff travelers.

Along with its rich history, the Hotel Weatherford is also said to be called home to a couple of resident ghosts. The Zane Grey Ballroom, complete with its stained glass windows and antique Brunswick bar from Tombstone, is the site where at least one of Weatherford’s ghosts is said to most often appear. In this beautiful ballroom, the ghostly woman has often been spied floating across the room. On other occasions, she is said to dart from one side of the room to the other. Other phenomena in the ballroom include the light over the pool table that seemingly sways of its own accord and the sounds of whispers and voices coming from an otherwise empty bar. 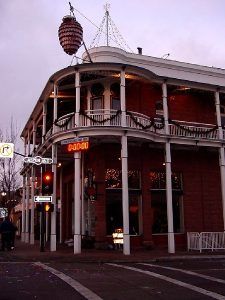 Apparently, there the ghosts of a long-ago bride and groom also haunt the hotel. According to the legend, the honeymoon couple was murdered in Room 54 of the hotel back in the 1930s. On at least one occasion, an employee who was staying in the hotel, awoke in the middle of the night to find a bride and groom sitting on the foot of the bed. Today, the room has been turned into a storage closet, but that hasn’t stopped the ghostly pair, as guests have often reported seeing the couple enter the room. Staff often report hearing their names being called out by an unseen spirit while on the fourth floor as well as feeling a presence standing behind them.

While at the historic Hotel Weatherford, you may very well “see” a ghost, but if not, you are sure to enjoy the authentic Old West Hotel, old fashioned rooms, and delightful lounges.