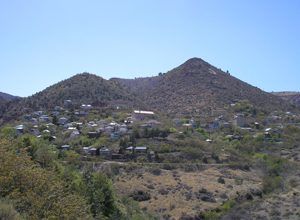 The revived copper mining ghost town of Jerome, Arizona is not only filled with historic buildings and rich history but is also said to be the home place of a number of lingering ghosts.

Today, Jerome is an artist’s and tourist’s community of about 400 residents, but that has not always been the case. During its prosperous copper mining years, the town boasted some 15,000 residents and was so filled with vices that it earned the nickname of the “Wickedest City in the West” by a New York newspaper. During those days, people died in mining accidents, gunfights, overdosed on opium, and a number of other unnatural events. With its ribald past, it comes as no surprise that the city is allegedly filled with wandering spirits.

In fact, one of the town’s most well-known ghosts is said to lurk at the town’s Community Center. Formally called Lawrence Memorial Hall, the building is more often familiarly termed as “Spook Hall” due to a number of strange happenings thereby its resident ghost. Named for a major contributor of the Jerome Historical Society, Lawrence Hall was once the old J.C. Penney building.

Lawrence Memorial Hall when it was a J.C. Penney Store.

However, before the building was built, in its place, stood a number of small shacks, referred to as “cribs” used by the “sporting ladies” who lived there and entertained their guests. In one of these lived a prostitute who was stabbed to death by a miner. It is this forlorn soul that is said to be often seen in front of Spook Hall, lingering there momentarily before moving onward toward a hotel, here she suddenly vanishes.

During Jerome’s heydays, the town was teeming with vice, including, by some estimates, more than 100 prostitutes. The Spook Hall ghost was not the only unfortunate girl who lost her reputation, as well as her life, in a mining camp filled with rowdy men.

One of the more popular ladies of the evening was a woman named Madam Jennie Banters, who became one of the richest women in northern Arizona. The Mile High Inn was originally built in 1899 and was known as the Clinksdale Building. Built over the ashes of a burnt outbuilding, the new structure had 18 inch thick walls to make it as fire-proof as possible. Sometime later, the building became the home of Madam Jennie Banters’ popular bordello, where Jennie and her “ladies” entertained numerous men. 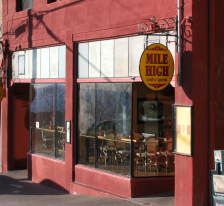 Later, when the town began to take on a more “civilized” manner, the bordellos were forced to move their businesses off Main Street and “Husband’s Alley” was born. Though Jennie had done well for herself, she too, allegedly lost her life to a client after moving from her Main Street location. By this time, prostitution was illegal but continued to thrive in Jerome until the 1940s.

In the meantime, the building became a hardware store on the lower level and the upstairs portion was used as apartments. Over the years, a number of businesses were housed here until it became the inn that it is today.

The charming eight guest room inn not only caters to Jerome tourists, but it also continues to play host to Jennie Banters, herself, as well as a number of other resident ghosts, including a phantom cat that walks the halls and leaves its footprints on the beds.

As in life, Jennie is the most popular of the inn’s unearthly guests. The former madam of the brothel is often seen in the Lariat and Lace Room as well as keeping an eye on the kitchen, where she lets her presence be known by flying objects that come off their resting places when they are not put away properly. She has been known to move things about throughout the inn, including furnishings and smaller objects, as well as rotating ceiling fans. Often, she is said to turn on the radio in rooms, just as the maids come into clean them.

The spectral cat has been seen a number of times by both staff and guests, who often stoop to pick her up. However, before they get the chance, it vanishes. The cat has also been known to brush up against people, especially in the kitchen and restaurant and its paw prints have been seen on the made-up beds. Visitors to the inn have also reported hearing the cat’s meow and the sound of a cat sharpening its claws. The cat is thought to have been Madam Jennie’s pampered pet.

An elderly gentleman is also said to roam about the inn. A friendly apparition, he has been seen dressed in vintage work clothes and a felt hat, looking down at the alley from the window in the “Pillow Talk” room. In this room, he also reported leaves his indentation on the bed. Also blamed on this old man are wall hanging and pictures that are often rearranged or placed in the armoire in the “Kiss and Tell” room. The armoire doors here also have been known to open and close of their own accord.

Another younger man, who isn’t so friendly, evidently loves to startle guests and staff alike. Though he doesn’t hurt anyone, he allegedly loves to blow cold winds through guest rooms and has been known to appear as a shadowing figure in the Victorian Rose Room as well as in the restaurant. The hazy figure is seen wearing a grumpy look of disapproval on his face.

Other phenomena include locked doors that open and close by themselves, furniture that is mysteriously rearranged, utensils that fly off their resting places in the kitchen, cold winds blowing through the rooms, and a statue that turns itself around. In the Victorian Rose Room, the smell of roses or perfume is often detected and the water faucets tend to turn on and off of their own accord.

The most active place in the building is probably the restaurant and kitchen. Here, whistling is often heard in the bar area, metal signs have flown off the wall, glasses slide off tables with a crash, a woman has been heard singing, and electrical devices seemingly have a mind of their own, turning on and off at will.

Today, the Inn at Jerome includes eight guest rooms, that have been remodeled and designed in their original Victorian style. Located in the heart of historic Jerome, the Inn also provides a restaurant and bar. 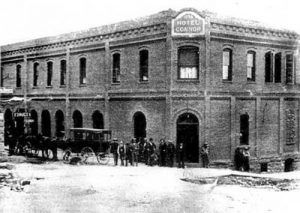 Just down the street is another haunted hotel – the Connor. First built by David Connor, “Connor’s Corner” was erected in 1897 by David Connor. The three-story brick hotel offered 20 guest rooms as well as a saloon, card rooms and billiards on the first floor. Built before the law required buildings to constructed of brick or stone, most folks thought Connor a bit daft at the expense he put into the hotel, which included stone quarried nearby for the foundations and brick shipped in from Cottonwood, Arizona. Built with the more affluent citizens and travelers in mind, the first-class hotel rented for $1.00 per night. But the Connor would be plagued with a colorful future including several fires over the next few years.

Though immediately successful, Connor’s Corner would see its first tragedy in just little more than a year, when it was destroyed by fire in September 1898. But David Connor also had the foresight to have bought insurance on his property. Only one of two business owners in town to carry insurance, he was paid $14,500 for his losses and immediately rebuilt.

Over the next several years, Jerome would see more fires and the Connor Hotel would again be damaged, only to be rebuilt with insurance money again and again. Because of its stone structure in a mining camp filled with wooden buildings and canvas tents, it was sometimes credited with saving the downtown district from burning entirely.

When the Connor Hotel reopened in August 1899, it quickly became known as one of the finest hotels in the West, having a number of amenities unheard of in many hotels of the time, including full electricity, a call bell in each room for service, and its own bus for delivering guests to and from the train depot.

During the city’s thriving mining days of the early 20th century, the hotel prospered, often being filled to capacity. However, Jerome’s mining prosperity was not to last and as the fortunes of the mines waned, so did the Connor Hotel’s. By 1931, it had closed. By that time, the building had passed to David Connor’s son, who continued to rent out the ground floor for commercial businesses, but the upstairs hotel rooms sat vacant.

When the mines closed in the 1950s, Jerome became a ghost town and the vast majority of the buildings sat abandoned and neglected. 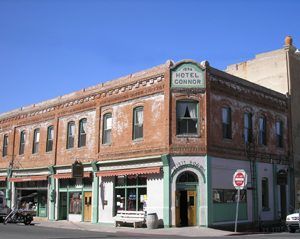 However, in the late 1960s, new residents, enchanted with the old town, began to move in once again. It soon developed into an artists’ community and tourist destination. The old hotel opened up once again, providing ten larger rooms instead of twenty. However, it was not the luxury hotel of its past, but more of a “low-budget” hotel.

In the 1980’s it closed again due to safety violations and remained empty up until the 21st century. However, in 2000, the current owners began to renovate the hotel, bringing it up to required safety standards and renovating the rooms to their historic splendor, while providing modern amenities.

Visitors today can enjoy not only wonderful blends of the past and present but by some accounts, perhaps a spectral ghost or two.

In Room 1, a tale circulates that the first guest to ever stay in the hotel was its electrician, who was frightened by whispers and the sounds of women laughing in the room. Later, he felt cold chills in the room and spent the rest of the night sleeping in his van. Since that time, other strange events have been reported including the armoire doors opening of their own volition and odd images appearing in photographs.

In Room 2, it is said that objects tend to move around of their own accord, including furnishings and small guest items. In Room 4, guests and staff have reported hearing the growl of a dog and an old man coughing.

Note that if the