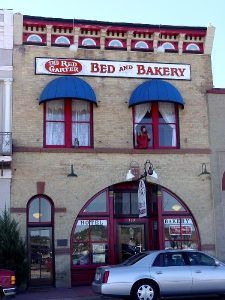 While bunking down at the Red Garter Inn in Williams, Arizona, you will not only sleep alongside a rich history but perhaps a ghost. The building that houses the Red Garter has been standing for more than a century serving as a saloon, a bordello, a rooming house, a general store, and more.

Built in 1897 by August Tetzlaff, a German tailor, Tetzlaff planned to cash in on the expected silver and copper boom anticipated at the Grand Canyon. The building first housed a saloon on the first floor and a brothel with a parlor and eight cribs upstairs, where the girls were often known to hang out of the windows calling to the working men below. A steep flight of stairs called the “Cowboy’s Endurance Test” led to the girls’ upstairs rooms. The second floor also boasted a two-story outhouse off the back of the building, so that brothel “guests” wouldn’t have to navigate the steep stairs once again.

Behind the saloon, two rear rooms of the building once housed Chinese railroad workers, who both lived and operated a chophouse and opium den crowded into the small space. During this time, the local sheriff was often called to the site to investigate a murder, only to arrive to find nothing out of the ordinary.

At one point, the tales became so frequent that the local garbage collector was lowered into the cesspool below the outhouses to look for bodies, only to be lifted again, having found nothing.

The saloon was operated for years by Longino Mora, a notable figure as a U.S. Cavalry Scout, and his heroism in the Indian Wars. Born in 1848 in Socorro, New Mexico, Longino also became legendary in Williams for having five wives and 25 children over the years. When his youngest child was born, his oldest child was sixty years old.

The saloon and bordello thrived as miners, loggers, cowboys, and railroad workers stopped in for a drink and often to partake of the painted ladies upstairs.

By the turn of the century, Williams had gained a reputation as a rough and rowdy frontier town filled with saloons, brothels, gambling houses, and opium dens. Soon, the town restricted the houses of vice to an area called “Saloon Row” on Railroad Avenue.

Though Arizona outlawed prostitution in 1907, the law was only loosely enforced. Even during prohibition, the saloon and brothel continued to operate, hiding its bar and poker tables behind a divider. Both businesses continued to operate successfully until the mid-1940s, when a murder was committed on the stairs of the Red Garter, leading to a city-wide crackdown on houses of ill-repute. The crackdown ultimately led to the closure of the saloon and brothel after more than forty years of operation.

Over the next several decades, the building would house different types of businesses, including a rooming house and general store. In 1979, a man named John Holst bought the building but continued to lease it out until 1994. At that time, Holst renovated the building converting the eight cribs into four guest rooms, each with its own bathroom, and opened the Red Garter Bed and Bakery. 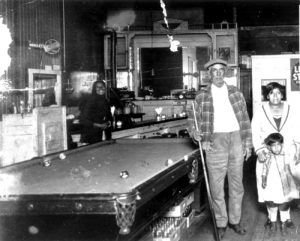 Longino Mora at the Red Garter Bed and Bakery

After opening, guests and staff began to report ghostly activity, including the sound of footsteps when no one was around, doors mysteriously slamming, and strange “clunking” noises heard throughout the building. Though one might think that the spiritual activity could be attributed to the murder that occurred on the stairway or the many missing people during the Chinese opium days, the spirit is said to be that of a young girl, for which no one can account for.

Guests have reported seeing the apparition, describing her as a Hispanic girl with long dark hair dressed in a white nightgown. One guest who claimed to have made contact with the spirit said her name was Eve or Eva.

While most guests of the historic inn report getting a good night’s sleep, others have said they felt their beds shake or someone touching their arms.

The most unusual phenomenon is that the ghost sometimes seems to appear in photographs. One such photograph that owner John Holst will frequently show his guests is a 1934 picture of the unsmiling faces of Longino Mora, his fifth wife Clara, and his 25th child, Carmina. Oddly, the photograph also portrays a woman behind the counter standing before a mirror who is smiling broadly. The woman is not reflected in the mirror she stands in front of. Might this be the mysterious Eva?

Now called the Red Garter Inn, it is listed on the National Register of Historic Places. It is a wonderful bed and breakfast experience that downplays the stories of Eva as “greatly exaggerated.” Still, though, the legend and experiences of the past will live on in Williams.