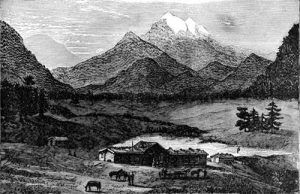 The frontier of the late 1800’s was on the plains and in the mountains. In that immense territory bounded by the Pacific on the west, and on the east by a line running irregularly from the sources of the Red River of the North to the Platte River, o100 miles from Omaha, and then to the mouth of the Brazos River in Texas,  wherever a settlement is isolated, there is the frontier.

Life in these remote regions is affected, of course, by external surroundings. The same is true of the passage of the pioneer battalions from the eastern settlements through the country westward. The mountain-frontier presents, both to the settler who makes her abode there, and to her who passes through its wild pathways, a distinct set of difficulties and dangers besides those which are incident to every family which settles far from the more populous districts.

The enormous extent of the mountain region can be measured in linear and square miles; it can be bounded roughly by the Pacific Ocean and the fountains of the great rivers which course through the Mississippi valley; it can be placed before the eye in an astronomical position between such and such latitudes and longitudes, but such descriptions convey to the mind only an idea which is quite vague and general. When we say that one hundred and fifty states like Connecticut, or twenty states like New York or Illinois, spread over that infinitude of peaks and ranges, would scarcely cover them, we gain a somewhat more adequate idea of their extent. But it is only by actually traversing this wilderness of hills and mountains, east and west, north and south, that we can more fully comprehend its extent and the difficulties to be encountered by the emigrant who crosses it.

A straight line from Cheyenne on the east, to Placer at the foot of the Sierra Nevada in California, is 850 miles; by the shortest traveled route between these points it is upward of one thousand miles. A straight line from the same point in the east to Oregon City, among the Cascade Mountains in Oregon, measures nine hundred and fifty miles; by the traveled routes it is more than twelve hundred.

Thirty years ago, when railroads were unknown west of Buffalo, the journey by ox-teams across the continent, from the Atlantic to the Pacific, was more than three thousand miles, and might occupy from one year to eighteen months, according to circumstances.

After leaving the regions where roads and settlements made their march comparatively comfortable and secure, they struck boldly across the plains, fording rivers, hewing their way through forests, toiling across wide tracks of desert, destitute of food, herbage, and water, until they reached the Rocky Mountains. The region they were now to pass through had been penetrated by scarcely any but hunters, fur traders, soldiers, and missionaries. It was to the peaceful settler who was seeking a home, a “terra incognita,” an unknown land. Those mountain peaks were veiled in clouds, those devious labyrinthine valleys were the abode of darkness. The awful majesty of nature’s works, the Titanic wonder-shapes which God hath wrought, are calculated to burden the imagination and subdue the aspiring soul of man by their vastness. Those mountain heights, seen from which the files of travelers passing through the profound defiles, look like insects; the relentless sway of nature’s great forces–the storm roaring through the gorges, the flood plunging from the precipice and wearing trenches a thousand feet deep in the flinty rock; the walls which rear themselves into giant ramparts which human power can never scale; the wide circles of desolation, where hunger and thirst have their domain; such spectacles must indeed have thrilled the hearts, awed the minds, and filled the imaginations of the early pioneers with forebodings of difficulty and danger.

And yet the actual difficulties encountered by the emigrants, the actual toils, dangers, and hardships endured then in conquering a passage through and over the Rocky Mountains and their kindred ranges, must have surpassed the anticipations of the shrewdest forethought, and the bodings of the gloomiest imagination. Tongue cannot tell, nor pen describe, nor hath it entered into the heart of the eastern home-dweller to conceive of the forlorn and terrible stories of those early mountain passages. We may wonder whether the fortunate traveler of these days, who is whirled up and down those perilous slopes by a forty-ton locomotive, often looks back to the time when those rickety wagons and lean oxen jogged along, drearily, eight or ten miles a day through those terrible fastnesses, or reverting to such a scene, expends upon it a merited sympathy.

Now a seven days’ journey from Manhattan to the Golden Gate, sitting in a palace car, well fed by day, well rested by night, scarcely more fatigued when one steps on the streets of San Francisco than by a day’s journey on horseback in the olden time! Then a year’s journey in the emigrant wagon, scantily fed, poorly nourished with sleep, footsore and haggard, the weary emigrant and his wife dragged themselves into the spot in the valley of the Sacramento, or the Columbia, where they were to commence anew their homely toils!

Who can sit down calmly, and, casting his eyes back to those heroes and heroines–the Rocky Mountain pioneers–and not feel his heart swell with pride and gratitude! Pride, in that, as an American, he can count such men and women among his countrymen; gratitude, in that he and the whole country are reaping fruits from their heroic courage, fortitude, and enterprise. Dangers met with an undaunted heart, hardships endured with unshrinking fortitude, trials and sufferings borne with cheerful patience, forgetfulness of self, devotion and sacrifice for others: such, in brief words, is the record of woman in those first journeys of the pioneers who crossed the continent for the purpose of making homes, forming communities, and building states on the Pacific slope. 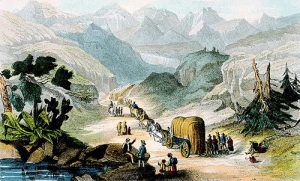 Among these histories, which illustrate most clearly the virtues of the pioneer women, we count those which display her battling with the difficulties of the passage through the mountains, as proving that the heroine of our own time may be matched with those who have lived before her in any age or clime. One of these histories runs as follows: In the corps of pioneers who, in 1844, were pushing the outposts of civilization farther towards the setting sun, was a young couple who left Illinois late in the summer of that year, and, journeying with a white-tilted wagon, drawn by four oxen, crossed the Missouri near the site of old Fort Kearney, and moving in a bee line over the prairie, early in November, encamped for the winter just beyond the forks of the Platte.

A low cabin, built of cotton-wood, banked up with earth, and consisting of a single room, which contained their furniture, farming utensils, and stores, sufficed as a shelter against the severe winds which sweep over those plains in the inclement season; their oxen, not requiring to be housed, were allowed to roam at large and browse upon the sweet grass which remains nourishing in that region throughout the winter.

At that period immense herds of bison roved through that section, and in a few days after the arrival of Mr. and Mrs. Hinman–for this was their name–they had each shot, almost without stirring from their camp, three fat buffalo cows, whose flesh was dried and added to their winter’s store. A supply of fresh meat was thus near at hand, and for five weeks they fared sumptuously on buffalo soup and ribs, tender-loin and marrow bones, roasted with succulent tidbits from the hump, and tongue, which, with boiled Indian meal, formed the staple of their repasts.

Both Mr. Hinman and his wife were scions of that hardy stock which had, even before the Revolutionary War, set out from Connecticut, and, cutting their way through the forest, had crossed the Alleghany Mountains and river, and pitched their camp in the rich valley of the Muskingum, near the site of the present city of Marietta. Both had also grown up amid the surroundings of true frontier life, and were endowed with faculties, as well as fitted by experience, to engage in the bold enterprise wherein they were now embarked, namely, to cross the Rocky Mountains with a single ox-team and establish themselves in the fertile vale of the Willamette in Oregon .

The spare but well-knit frame, the swarthy skin, the prominent features, the deep-set eyes, the alert and yet composed manner; marked in them the true type of the born borderer. To these physical traits were united the qualities of mind and heart which are equally characteristic of the class to which they belonged; an apparent insensibility to fear, a capacity for endurance that exists in the moral nature rather than in the body, and a self-reliance that never faltered, formed a combination which fitted them to cope with the difficulties that environed their perilous project.