“There’s no such thing as good money or bad money. There’s just money.” 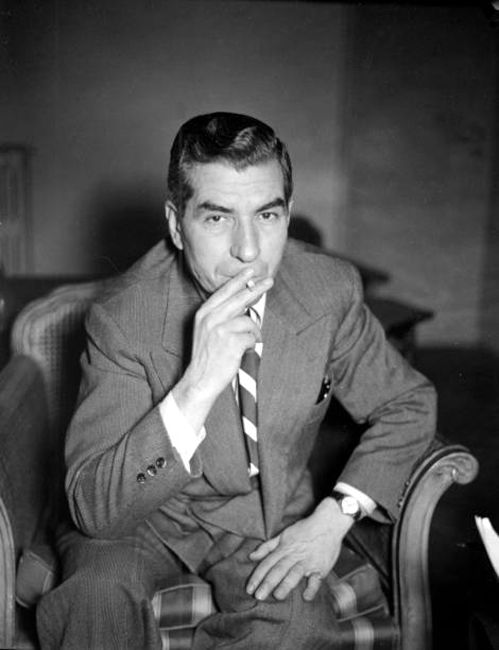 Charles “Lucky” Luciano was an influential Italian-born mobster who operated out of New York City for years before he was sent to prison and later deported from the United States. 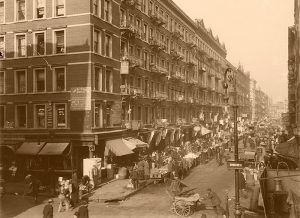 Lower East Side of New York City by the Detroit Publishing Co., 1909

He was born Salvatore Lucania on November 24, 1897, in Sicily, Italy, to Antonio and Rosalia Cuania Lucania. His parents moved their five children to New York City in 1906, hoping to find a better life. Though Charles attended school, he was immediately in trouble and was arrested for shoplifting when he was just ten years old. Not able to speak English, Luciano struggled in school and early on, started one of his first rackets — getting his schoolmates to pay him for protection for 10 cents a week.

At age 14, Luciano dropped out of school and was arrested several more times as a teenager for minor theft. By 1915, he had become a teenage hoodlum running a gang on the Lower East Side of New York City. He also ran with the Five Points Gang in Manhattan. 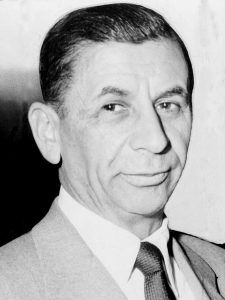 During this time, he met and befriended Jewish gang members Meyer Lansky and his associate Benjamin “Bugsy” Siegel, who would later become two of his most important allies. He also became affiliated with Giuseppe “Joe the Boss” Masseria’s criminal operation. Luciano was soon involved in dealing drugs and pimping and had his first major run-in with the law in 1916. He was caught selling heroin and sent to a reformatory for several months. After his release, he changed his name to “Charles,” as he felt that “Salvatore” or “Sal” was a girl’s name.

Afterward, Luciano, Benjamin “Bugsy” Siegel, and Frank Costello committed simple robberies to make ends meet, but when Prohibition began in 1919, they became involved in selling illegal alcohol. He and Lansky soon supplied alcoholic beverages to all the Manhattan “speakeasies.” During this time, a war was being fought between the major gangs in New York, and at the age of 23, Luciano aligned himself with the largest Mafia family, that of Giuseppe “Joe the Boss” Masseria. 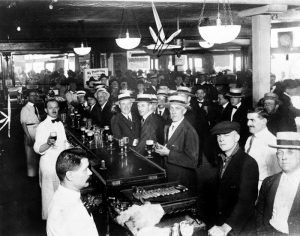 However, he continued with his bootlegging business and soon controlled plants, distilleries, trucks, and warehouses for the sale of illegal alcohol. Some of his partners included Meyer Lansky, Bugsy Siegel, Guisseppe “Joe Adonis” Doto, “Waxey” Gordon, Vito Genovese, Frank Costello, and Arnold “The Brain” Rothstein, who had earlier “fixed” the 1919 World Series.

Rothstein, a racketeer, businessman, and gambler who had become a kingpin of the Jewish mob in New York City, financed the operation and educated Luciano on running bootleg alcohol as a business. Rothstein also taught Luciano how to move in high society.

By 1925, Luciano and his partners ran the largest bootlegging operation in New York. He imported Scotch whiskey from Scotland, rum from the Caribbean, and other alcohol products from Canada. He was also involved in illegal gambling, prostitution, and other illegal enterprises. He was personally netting about $4 million each year after the costs of bribing politicians and police. 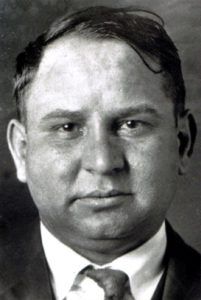 In the meantime, Luciano had risen in Giuseppe Masseria’s criminal organization. By the late 1920s, Masseria’s main rival was boss Salvatore Maranzano, who had come from Sicily to run the Castellammarese clan. Maranzano refused to pay commissions to Masseria, and their rivalry escalated. Both of these leaders, who had started their criminal careers in Italy, believed in upholding the supposed “Old World Mafia” with principles of honor, tradition, and respect, and refused to work with non-Italians, and preferred to work only with Sicilians. Luciano, along with several other younger Italian mobsters, thought the idea of working only with Italians limited the growth of their personal careers, as well as the potential growth of the criminal empires. These men, known as the “Young Turks,” wanted to work with Jewish and Irish gangsters as long as money was to be made. Luciano knew that these men could be trusted and were great assets to any business from having worked with Meyer Lansky and Arnold Rothstein. Luciano’s vision was to form a national crime syndicate in which the Italian, Jewish, and Irish gangs could pool their resources and turn organized crime into a lucrative business for all. Luciano’s and the Young Turk’s ideas concerned Masseria and Maranzano, who believed strongly in the old ways. 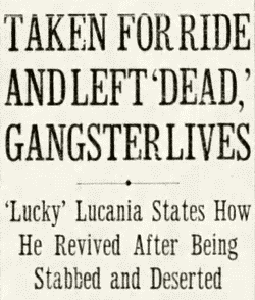 In October 1929, Luciano was kidnapped by three men, beaten, stabbed, and dumped on a beach on Staten Island. Though he was left for dead, he somehow survived but was forever marked with a scar and droopy eye. The identities of his abductors were never determined, but the press coverage surrounding the event introduced Luciano to the New York public. After this event, Charles Luciano was thought to have earned the nickname “Lucky.”

The war between the two mafia bosses continued, referred to as the Castellammarese War because Salvatore Maranzano was from Castellammare del Golfo, Sicily. The rivalry became a violent and bloody power struggle to control the Italian-American Mafia. On April 15, 1931, Giuseppe Masseria was killed while eating dinner at a Coney Island restaurant in Brooklyn. Afterward, Salvatore Maranzano declared himself as the leader of the Mafia in New York. Luciano then took over Masseria’s position with Marazano’s approval.

Marazano soon viewed Luciano as a threat and ordered a hit on him. However, Luciano found out about the plan and struck first on September 10, 1931, when Marazano was killed by several mobsters in his office in the New York Central Building.

With the help of his longtime friend, Meyer Lansky, Lucky Luciano established a power-sharing arrangement called “The Commission,” a group of five Mafia families of equal stature, to avoid such wars in the future. The other leaders of the commission included Joseph Bonanno, Joseph Profaci, Tommy Gagliano, and Vincent Mangano. Afterward, all organized crime activities in the 1930s were decided by this commission. 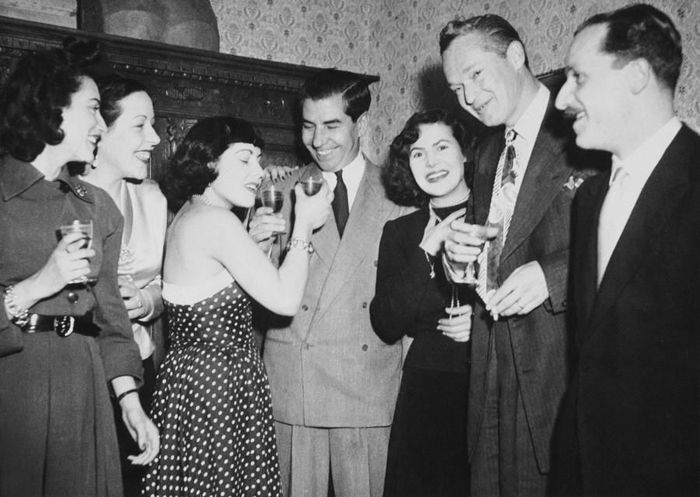 These top crime bosses became popular society figures, and Luciano was often seen at restaurants and theaters with well-known civic leaders, entertainers, and other notable people. He lived at New York’s luxurious Waldorf Towers, looked the part of a wealthy businessman, wearing custom-made suits, and rode about town in chauffeur-driven cars.

In 1936, New York District Attorney, Thomas E. Dewey, brought charges against Luciano for running a prostitution ring. In April, when Luciano was visiting Hot Springs, Arkansas, he was arrested and sent to New York to stand trial. Though Luciano insisted that he was not involved in prostitution, a series of witnesses testified against him, and the district attorney won his case. Luciano then received a 30 to 50-year prison sentence, the longest ever handed down for such a crime. He was incarcerated in the Dannemora Prison in New York, called the “Siberia” of organized crime. 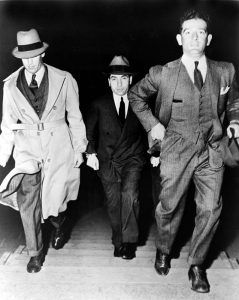 Lucky Luciano was escorted to jail in New York 1936.

He continued to be a mob boss from his cell, and during World War II, he helped U.S. naval intelligence end waterfront sabotage in New York. His sentence was commuted in 1946, and he was deported back to Italy. Luciano died of a heart attack in Naples, Italy, on July 26, 1962. After a large funeral in Naples, Luciano’s body was returned to the United States, and he was buried in the family’s vault at St. John’s Cemetery in Queens, New York.

The criminal empire that Luciano created continues.  After Luciano left, his former underboss, Vito Genovese, eventually took control of Luciano’s organization and became the head of what is now referred to as the Genovese crime family.

Bugsy Siegel and the Re-birth of Las Vegas