According to the stories of the day, Anne once more fell in love, this time with a member of the crew. This affair ended rather suddenly when Anne discovered that the other pirate was also a woman! This other female pirate was Mary Read, and her past had been filled with even more adventure than had Anne Bonny’s. She had at one time served in the English army, concealing her identity by donning the uniform of a regular soldier.

Anne Bonny and Mary Read became close companions and were almost constantly together. They wore women’s clothes most of the time they were on shipboard until a prize was sighted. Then they quickly changed into men’s jackets, long trousers, and knotted handkerchiefs about their heads. In battle, they fought alongside the other members of the crew, and it was later testified at their trials that they were just as cruel and bloodthirsty as any other pirates. When Rackham’s crew was eventually captured and tried, the two women were sentenced to hang along with the other men, but neither was ever executed. Mary Read died in jail of a violent fever. Anne Bonny was reprieved a number of times, and although no one seems to be certain just what did happen to her, there is no record of her having met death on the gallows.

Most of Rackham’s activities had been in the general vicinity of the West Indies, but there were numerous others of his kind who plagued the Carolina coast. Captain Edward Low’s Fancy captured a number of prizes in the waters off  North Carolina. His black flag, with a red skeleton outlined upon it, struck terror into the hearts of many an honest seaman. He was feared more than the general run of pirates, because it was reported, and believed, the man was insane. He was described by writers of the period as being a “ferocious brute,” and noted for his cruelty to prisoners. For some reason, he hated all seafarers from New England. His quick temper resulted in many mutilations among his captives. Perhaps this can best be explained because of his own ugly face, which had been severely slashed by a cutlass. Because of an argument with his surgeon, Low had tried to sew the wound himself, making a horrible botch of the job. From this time on, his misshapen face only added to the terror of his reputation. One of his favorite tricks was to cut off both ears of a victim and nick him with small sword cuts in various parts of the body. He would rip the masts out of a captured vessel, and then set its crew adrift in the trackless waste of the sea. And upon some occasions, he was even reported to have chained a crew aboard their vessel before setting it afire. Low was never captured, and no one knows how he met his end. He simply disappeared. 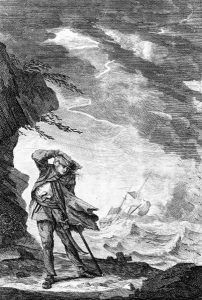 Edward Low had learned his trade under an equally notorious pirate, Captain George Lowther of the Happy Delivery. Lowther, like most pirates, was a coward, and seldom attacked a ship unless his opponent was much weaker. One bright fall day he opened fire upon the merchant ship Amy commanded by a Captain Gwatkins. Instead of securing safety in terror-stricken flight, or meekly surrendering, Gwatkins boldly returned the fire of the pirates. This so upset Lowther and his crew that they scurried away, not stopping until they had run their ship aground near the shore. Noticing they were still being pursued, they abandoned their vessel, rowed ashore, and fled into concealment among the thick forests on the shore. This was so disconcerting to Lowther and his men that they did not dare venture out again until the following spring. They spent the winter hiding in one of North Carolina’s shallow inlets. And when they did venture out again, they left the Carolina coast behind them, and sailed to the fishing grounds off Newfoundland where the smaller and lightly-armed fishing vessels would offer less resistance. Lowther was another of those pirates who escaped the hangman’s rope. He eventually killed himself with his own pistol to avoid capture. 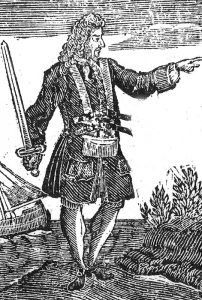 Among those pirates who fled the tightening of regulations in the West Indies was Captain Charles Vane, sometimes called Vaughn. When Woodes Rogers had arrived in the Bahamas, Vane and his rascals had laughed at the pardon which was offered the pirates. While other of the buccaneers were accepting the king’s clemency, Vane sailed insolently out of the harbor of Nassau, flaunting his black flag and firing a derisive gun in farewell. Like so many others of his kind, he discovered the happy hunting grounds off Carolina. Up and down the coast he ranged, sometimes as far south as Florida, sometimes as far north as New York. He would heave to right outside some busy harbor and capture merchant vessels as they cleared the port. At one time, his operations carried him almost into the very harbor of Charleston, South Carolina. It was Vane who so alarmed the Carolinians that an expedition was sent out to capture him, which resulted in the apprehension of the equally notorious Stede Bonnet. Vane proved himself a coward. He refused to attack a heavily armed French ship although his crew had urged him to make the effort. So disgusted were they that they voted him out of office and put him overboard in a small boat. After a shipwreck, Vane was rescued and taken to Jamaica where he was tried and hanged.

Then there was Christopher Moody, who was no older than 23 in 1717 when he became captain of a pirate crew plundering ships off the Carolina shore. His life was short. In 1722, not yet 30 years old, he was hanged in London. There was little mourning by his former comrades. Although Moody bore a reputation as a gentleman pirate, he was known to have cheated his men out of some of the loot they had accumulated off Carolina.

One of the bolder of the devil‑may-care freebooters was Captain William Lewis of the Morning Star. He awed his men by claiming to receive his strength from the devil himself. Once, off Carolina, he attacked and subdued a slave ship in the midst of the heavy seas during a raging storm. He operated with a crew made up mainly of Frenchmen and Black men. He had not trusted the English members of his band, so he got rid of them by setting them adrift in a small boat. This later proved to be his downfall, for it was the discontented French members of his crew who eventually killed Lewis.

The brutal ex‑prizefighter William Fly had one of the shortest careers. He lasted just a little over a month. He had led a mutiny aboard the ship “Elizabeth,” and was elected captain by the crew after he had personally killed the captain and most of the other officers. Renaming the ship Fame’s Revenge, he captured several vessels off the North Carolina coast. He was captured when he tried to repeat these feats in New England waters. Tried, he was hanged in Boston in 1726. His behavior at his execution would lead one to believe that the blows he had received as a prizefighter had addled his brains. Drawn in a cart to the gallows, Fly stood with a bouquet of flowers in his hands, laughing, bowing and smirking at the spectators who lined the way.

These are but a few of the pirates who plied their trade off the Carolina coast. There were many others, but their names and deeds were never recorded. In all their number, the two most famous were those two rogues who answered to the names of Stede Bonnet and Edward “Blackbeard” Teach.

Where there is a sea there are pirates
– Greek proverb 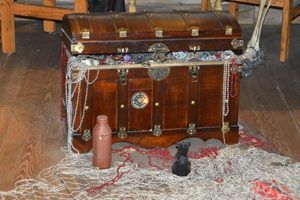 This article was excerpted from The Pirates of Colonial North Carolina, a publication of the Historical Publications Section, Division of Historical Resources, Office of Archives and History, North Carolina Department of Cultural Resources. The author, Hugh F. Rankin (1913‑1989) was a noted historian of colonial America and the American Revolution and a history professor at Tulane University from 1957 to 1983. He was the author or co-author of well over a dozen books on historical subjects and many journal articles. Today, this booklet is in the public domain as its copyright was not renewed. Though the context of the article has not changed, minor editing has occurred.