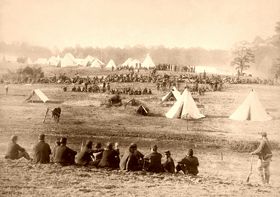 Galvanized Yankees were Confederate soldiers imprisoned during the Civil War who won their freedom by swearing their allegiance to the Union and enlisting in the Union Army. Due to doubts of their ultimate loyalty, they were generally assigned to posts far from the Civil War battlefields, often protecting the trails and settlements in the American West.

Numbering about 6,000 men, there were six regiments of these U.S. volunteers during 1864 and 1865. The term “galvanized” rebels or Yankees was coined by Samuel Bowles, a newspaper reporter, referring to galvanized metal, which turns colors when coated with zinc.

In the early days of the war, prison camps were merely holding areas where men waited to be exchanged for equal numbers of prisoners held by the other side. 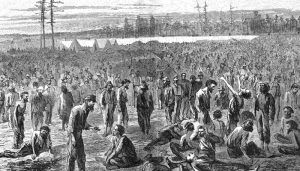 In 1863, however, the prisoner exchange system had broken down, causing prison camps to become permanent areas of incarceration, where growing numbers of men had no hope of release until the end of the war. Prison camps were horrible, filthy places that lacked all the necessities of life.

Worn-out clothing offered little protection from the elements, and the only shelter for the men was what they could improvise for themselves. They were seldom issued new clothing and often starved due to meager food allowances. Many saw enlistment in the enemy forces as an escape and took advantage of the personnel shortage in either army by joining it.

This posed a new problem to both armies since most recruits were still loyal to their original army and would desert at the first opportunity. On December 28, 1864, at Egypt Station, Mississippi, a Confederate regiment composed of 250 “galvanized” soldiers threw down their arms and surrendered as Union troops charged them. These men were sent to the Union prison in Alton, Illinois, as deserters. Still, they were saved from individual trials by General Grenville Dodge, who recruited them into the 5th and 6th U.S. Volunteers. The experiment of enlisting prisoners became a concern for the U.S. War Department, and policies surrounding this practice continually changed. In 1862, Colonel James Mulligan discovered that many Confederate prisoners did not wish to be exchanged and were willing to join the Union army; he illegally enlisted former Confederates to be used on the front lines. It was not until 1864 that President Lincoln finally endorsed the enlisting of ex-Confederates. 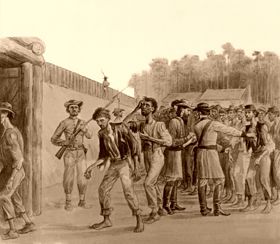 Events in the Eastern Theater of the Civil War continually overshadowed events in the American West. However, two important incidents gave settlers in the West reason to be concerned for their safety, especially since most of the able-bodied men had left the frontier to fight on eastern battlefields. By 1862, members of the Sioux tribe, who lived on a Minnesota reservation for twenty years, had accumulated many grievances. Provisions and treaty goods were often shoddy or were stolen by traders. Worst of all was the uninterrupted immigration of new settlers, which eventually forced the Sioux to give up nearly 900,000 acres of their reservation lands for 30 cents an acre. The starving Sioux had had enough and attempted to regain their ancestral lands. As a result, settlers and missionaries fled from the Minnesota frontier, seeking safety in New Ulm and St. Paul. On the first day of the Sioux uprising, 1,500 settlers were killed, and the town of New Ulm was saved only by the efforts of ill-equipped local volunteers.

In 1864, Colonel John Chivington further inflamed the frontier by leading 700 volunteers in an early morning raid on an encampment of 550 Cheyenne and Arapaho at Sand Creek, Colorado. Under orders to take no prisoners, the soldiers killed 150 men, women, and children. Word of what became known as the Sand Creek Massacre spread throughout the plains, causing deep resentment among the Cheyenne and Sioux, who retaliated by terrorizing the Oregon Trail and U.S. mail routes.

Both events highlighted a problem for the settlers; Native Americans were beginning to fight for their lands, yet only a handful of U.S. soldiers and frightened civilians, many armed only with pitchforks, were available to protect themselves from the “Indian Uprisings.” As a result, General Ulysses S. Grant ordered a contingent of Galvanized soldiers, by then called U.S. Volunteers and commanded by Northern officers, to the frontier to protect the trails, telegraph lines, and U.S. Mail routes. Doubts about the loyalty and reliability of these ex-Confederates were alleviated since frontier duty would prevent them from fighting their old comrades.

Six regiments of U.S. Volunteers were formed between early 1864 and June of 1865 and served under 23-year-old Colonel Charles Dimon. Dimon was eager to test his men in battle, and the unit was sent to Elizabeth City, North Carolina, where they fired a few shots, seized horses and bales of cotton. General Grant was opposed to their continued use in the East, saying that “it is not right to expose them where, to be taken prisoners, they might surely suffer as deserters.” The 1st U.S. Volunteers, 1,000 men strong, boarded the ship Continental in August of 1864, sailed to New York, then traveled by train to Chicago. Six companies proceeded to St. Louis, Missouri, where they boarded the steamboat Effie Deans and headed for their new home at Fort Rice in present-day North Dakota. 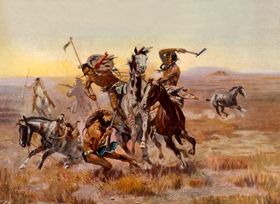 When the Sioux and Blackfoot meet

Initially, the Effie Deans were supposed to take the regiment to their new post; however, the Missouri River was low that year, and the 600 men were forced to march a distance of over 270 miles. The trip was extremely arduous, as the regiment lacked tents to protect themselves from pelting rain and hail and initially had no wagons to carry what meager supplies they had been issued. They arrived at Fort Rice on October 17. They made the journey from New York with surprisingly few desertions, surviving on salt pork, hardtack, coffee, and whatever water they could find. Many of the soldiers suffered from chronic diarrhea and scurvy by the end of their march.

Life at Fort Rice proved to be a challenge, as the post had not been fully completed and its buildings being made of cottonwood, a very inferior material. Colonel Dimon was inexperienced in dealing with Native Americans.

Though he befriended Two Bears of the Yanktonai Sioux, he made the mistake of considering Two Bears’ enemies to be his own. The young Colonel quickly learned that not all the Indians around the fort were as friendly as Two Bears, and soldiers were frequently ambushed and mutilated. The soldier’s weapon, the Springfield rifle, was ineffective against the Sioux, as it was a single-shot muzzle-loader that required fifteen seconds to reload. The Indians could shoot their arrows at a much faster rate.

Though the situation remained tense, life at Fort Rice improved in small ways. In November, the men raised $1,000 to buy their colonel a sword, silk sash, silver inlaid revolver, and field glasses. When these gifts were presented, the Colonel was “hardly able to speak.” The soldiers published a weekly newspaper entitled The Frontier Scout, which served to partially dispel the remoteness of their post. A homelike atmosphere was created by 21-year-old Elizabeth Cardwell, the wife of Private Patrick Cardwell. She accompanied the regiment up the Missouri River and shared the soldiers’ hardships on the march. She was held in the highest esteem by the men and became the “mother figure” of the Regiment. However, Fort Rice was not a good assignment, and many died of disease or violence during the winter of 1865.

The galvanized units were recruited from Union prison camps at Point Lookout, Maryland; Rock Island, Alton, and Camp Douglas, Illinois; Camp Chase, Ohio; and Camp Morton, Indiana. They garrisoned frontier forts which were low on manpower at a time of general unrest among American Indians and were stationed along the Missouri River and Oregon and Santa Fe Trails. From New Mexico to Montana, they endured Indian attacks, cold winters, disease, and grueling marches. Despite these hardships, they rebuilt trans-continental telegraph lines, restored stagecoach and mail routes between Missouri and California, escorted supply trains along the Santa Fe Trail, and protected wagon trains as they crossed the plains. By the time many of the Galvanized regiments reached their western posts, the Civil War had ended. The 1st U.S. Volunteers were mustered out on November 27, 1865, only a year and a month after they first reached Fort Rice. The last of the six regiments lasted a year longer, with the final Galvanized Yankee becoming a civilian on November 13, 1866. 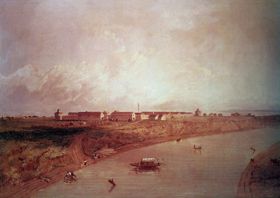 Afterward, Galvanized soldiers were shunned in the South and neglected by the Grand Army of the Republic. For most of the Galvanized Yankees, there was little left in the South to return home to, though some went back to rebuild their homes and careers, while others decided to remain in the West, with the chance to start new lives on the American frontier. Despite the varied origins of the 6,000 men who were “Galvanized” during the war, each had the chance to prove his loyalty to the United States. They were a valuable presence at a time and place in which they were needed.

Captain Enoch Adams, a commander of troops at Fort Rice, wrote: “their whole course and behavior has displayed that unadulterated patriotism was the only motive that urged them on… Many have laid down their lives at the beck of disease, some have been murdered by the arrow of the Indian, and with but few exceptions, living or dead, have been true to their trust.”

The Galvanized soldiers turned from fighting a war to divide the United States and joined a cause that endeavored to expand and strengthen the nation. Their unusual story is one of the least known and most ironic tales of the American West.