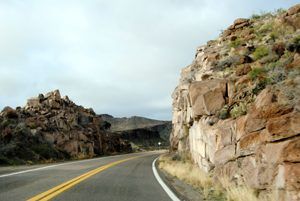 The Yucca Bypass from Kingman to Topock, Arizona, was a Route 66 alignment built through the area in 1952. This road bypassed the earlier path along Oatman Highway, passed by Cool Springs and Ed’s Camp, before making its way across Sitgreaves Pass to Gold Road, Oatman, and Golden Shores.

The area around Yucca, Arizona, and its lack of water and other natural resources have long caused the region to be sparsely populated. However, this didn’t stop the Atlantic and Pacific Railroad (affiliated with the Atchison, Topeka, and Santa Fe Railway), which barreled through in about 1881. The railroad built a station and a section house at the site, and before long, ranchers came to Yucca to ship their cattle and area miners to ship their ore. The small settlement soon became a busy waypoint for cargo and passengers and was officially established in 1883, but it was slow to grow. In 1905, a post office was established. 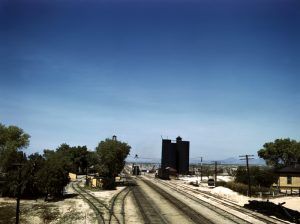 At about the same time, tungsten was discovered to the east of Yucca, though little was done about it until 1915, when it began to be actively mined. The veins were then worked from 1915 until the decline of prices in 1919 made production unprofitable. However, the mine would be worked intermittently for years. This production brought more people to the area.

In 1913, a segment of National Old Trails Road, the precursor to Route 66, was added from Needles, California, to Kingman, Arizona, along the Sacramento Wash through the Yucca area. Portions of the road are still used today, as evidenced by the Old Trails Road Interchange along Interstate-40, approximately one mile north of the Yucca townsite. In 1924, a one-room school was built and later expanded. The building still survives today.

When Route 66 was first built in the 1920s, several supporters worked to have the highway run parallel to the railroad through the Yucca. However, Oatman was at its peak as a mining community and had more clout. So, even though it made the drive more difficult and longer on those old Model-Ts, the original route took the hazardous journey up Sitgreaves Pass, bypassing Yucca. 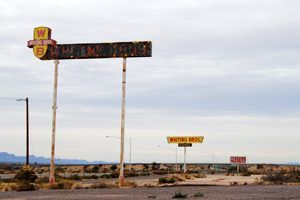 In December 1942, during World War II, an Air Force Gunnery School was established in nearby Kingman, with a sub-base in Yucca. However, when the war was over, these people left the area, and, at about the same time, ranching and mining began to decline.

The only thing that saved the town from becoming a “ghost” at that time was the rerouting of Route 66 in October 1952. At that time, Route 66 was rerouted, bypassing Oatman and making it an easier and faster drive to California. At that point, numerous tourist courts, cafes, and service stations, including a Whiting Brothers truck stop, sprouted up.

Making things even better for small-town Yucca was when the Ford Motor Company purchased the old Air Force grounds and established the Arizona Proving Grounds for testing vehicles in June 1955. Employing dozens of people, the future looked bright for the community. Today, the grounds, which include an oval five-mile high-speed track, a low friction test track for testing skidding and breaking, and an 18-acre paved vehicle dynamics area for testing cornering and steering, are still operational but are owned by the Chrysler Corporation, 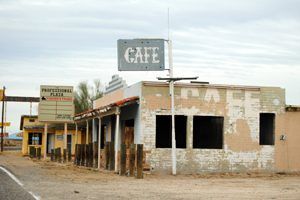 The Yucca Fire District was established in July 1962 to serve Yucca and the surrounding area, encompassing 125 miles. Unfortunately, Yucca’s heydays wouldn’t last. In the early 1970s, Interstate 40 replaced the section of Route 66 going through Yucca. Though exits from the Interstate were built to Yucca, it wasn’t enough to keep the old services open. Soon, one more of the many Whiting Brothers Complexes “bit the dust,” as well as several other service businesses.

For the last several decades, Yucca’s population has continually declined. However, the unincorporated community still boasts a school, post office, convenience store, restaurant, bar, and a population of about 250 people that live in the area. One popular destination is the Stage Coach Trails Guest Ranch, a dude ranch with 360,000 acres of natural western desert land at the foot of the Mohave Hualapai Mountains. 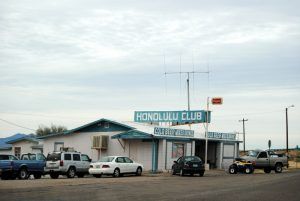 Of vintage Route 66, travelers can still see a few fading signs and the ruins of old businesses, including old cafes, motels, and service stations. Other quirky photo opportunities include a semi-truck perched high on a pole on the east side of Interstate 40, just north of Exit 25, which was once associated with a garage next door; and a golf ball looking building, south of Exit 25, west of the interstate, that was once associated with a land development company that went bust.

Beyond Yucca, there is little to see along the steaming desert highway other than dozens of large billboards enticing visitors to visit Lake Havasu to the South. Travelers should settle in for the next 25-mile stretch until they reach the wide Colorado River at Topock. 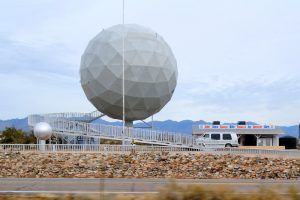 Route 66 Alignments From Kingman to California