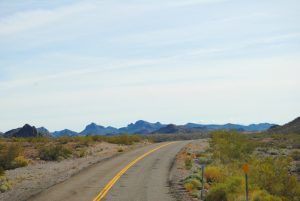 Route 66 between Oatman and Golden Shores, Arizona by Kathy Weiser-Alexander.

Route 66 travelers making their way west from Oatman, Arizona will descend an incline for about 20 miles before reaching Golden Shores. This area was not born of the Mother Road and is part of the city of Topock, but, the name refers to a development near the Colorado River north of Topock.

An attractive area to retirees, Golden Shores is also visited by numerous others due to its mild climate during the winter, its proximity to Lake Havasu, and the nearby gambling mecca of Laughlin, Nevada. Here, there are numerous outdoor activities including the Lake Havasu Wildlife Refuge on the west side of the community by the Colorado River, which is home to over 200 different species of birds. Boats can be launched from the Golden Shores Marina, fishing is ideal at the Topock Marsh, and those preferring the off-road paths thru the desert will find many opportunities to traverse the rugged terrain. 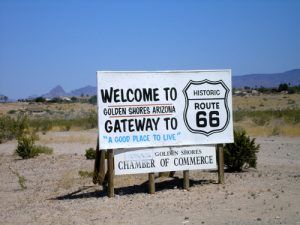 Beyond Golden Shores, just about five miles to the south is the end of Arizona’s ribbon of the Mother Road at Topock, through which Route 66 travels. Sitting at an elevation of 505 feet right at the eastern edge of the Colorado River, the settlement got its start when the Atlantic and Pacific Railroad built a wooden bridge across the river in 1883. Comprised of a railroad station and steamboat landing, it was first called Mellen for Captain John Alexander “Jack” Mellon, who was a Colorado River steamboat captain owner of the Colorado Steam Navigation Company, though it was misspelled as “Mellen.”

Just a few years later, in 1890, the wood railroad bridge was replaced by the Red Rock Bridge, at a cost of almost a half-million dollars. This bridge, built by the Atchison, Topeka & Santa Fe Railway was a cantilevered truss bridge. At about this time, the settlement’s name was changed to Topock, a term thought to have come from the Mohave Indian word for “water crossing” or “bridge.” 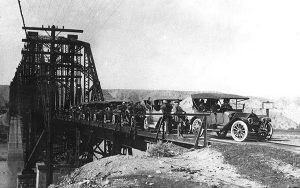 At this time, road travelers crossed the river on the Needles Ferry. However, in 1914, when a flood took the ferry out of commission, planks were put on the Red Rock Bridge, so that automobiles and wagons could cross the bridge between trains. Just two years later, the Trails Arch Bridge was completed in February 1916, to accommodate road travelers. Though it was a substantial improvement over sharing a bridge with a train, the arch bridge could only accommodate one-way traffic. At the time of its construction, it was the longest arched bridge in America. The one-way traffic wasn’t a huge problem, as there really wasn’t that much automobile traffic. That would change; however, when Route 66 barreled through, and even more so during World War II. The Trails Arch Bridge had a  weight limitation problem of 11 tons, which created a problem for truck traffic. 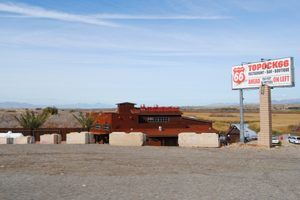 Soon, engineers began to look for a new way for Route 66 travelers to cross the Colorado River. When the Santa Fe Railroad opened a new bridge for their trains in 1945, the rails were removed from the old Red Rock Bridge, reinforcements were made, and the bridge was opened for automobile traffic in 1947.

And what of the Trails Arch Bridge that was abandoned in 1947? It’s still there — its gleaming white girders now supporting gas and utility lines across the river. The Old Trails Arch Bridge was featured in the film The Grapes of Wrath. Sometimes also referred to as the Topock Bridge or the Needles Bridge, it was listed on the National Register of Historic Places in 1988. 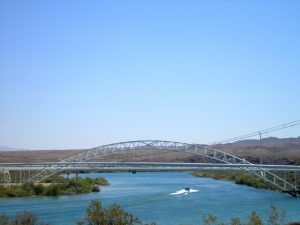 Historic Route 66 leaves Interstate-40 at the Topock exit at Mile Marker #1 and heads north. The original town of Topock at this site no longer exists, and there are no visible remnants. The small resort-style town of Golden Shores lies about five miles north, offering a variety of recreation opportunities. The town’s post office continues to be named “Topock”, even though the area is often referred to as Golden Shores. The community’s population is about 2,000 people but increases in the winter due to Snowbirders flocking to the area.

What a wondrous ride across the beautiful state of Arizona! Now, fill up your water bottle and your gas tank as you head on to California across the long and dusty Mojave desert.

To About California Route 66