As Route 66 travelers begin the journey south of Kingman on the Oatman Highway, little will immediately be seen with the exception of a dozen ramshackle houses and hundreds of yucca plants. However, the elevation is rising and the road soon begins its ascent into the mountains. Soon, travelers will come to the small roadside stop of Cool Springs Camp. Gleaming in its appearance today, visitors might be surprised to learn it wasn’t so long ago that this wonderful camp had gone completely to ruin.

Built in 1926, the initial camp included a café and a Mobil Oil Station. The last stop before the steep Goldroad grade, the camp was a welcome respite to check vehicles’ oil, water, and gas, and grab a bite to eat.

In the 1930s, James Walker moved his family from Huntington, Indiana to operate the camp, improving the station and building eight tourist cabins. However, sometime later, the couple divorced, leaving Mrs. Walker and the children to run the camp.

The camp continued to flourish and Mrs. Walker remarried a man named Floyd Spidell. After World War II, when people began to travel at a pace never seen before, the chicken dinners served at Cool Camp became famous for the many travelers making their way to California. 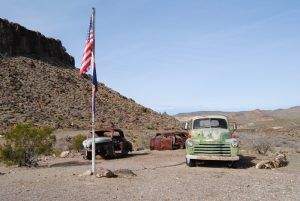 In the early 1950s, the Yucca Bypass was developed, which took its toll on the camp, as well as nearby Oatman, effectively turning it into a ghost town.

Sometime later, the Spidell’s divorced, and Floyd was left to run the camp. In 1957, he was joined by his niece, Nancy Schoenerr and her husband Chuck. Though traffic had dwindled on the steep Sitgreaves Pass, they continued to operate the camp until 1966, when the entire camp burned completed to the ground, leaving nothing but remnants of the stone foundations. For the next several decades, the site was left abandoned and neglected.

It was briefly rebuilt for the movie “Universal Soldier” in 1991, then promptly blown up. However, in 2001, the camp was purchased by Ned and Michelle Leuchtner and the delicate restoration process was begun. In 2004, with the help of builder Dennis DeChenne, Ned fully restored the Cool Springs Camp station based on old photos. Cool Springs opened to a new generation of Route 66’rs, featuring a gift shop and museum. Today, a stop at Cool Springs is a must for photo opportunities, a soda, and to view the gift shop and museum. 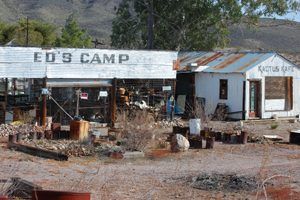 About a mile on down the road, you will come to the remains of Ed’s Camp which has, unfortunately, not faired as well. The camp belonged to a man named Ed Edgerton, a miner who came to the area in 1917. When Route 66 came through, he decided to build a trading post upon his property and set the foundation. However, traffic increased at such a rapid pace, he simply put a roof over the foundation, saying, “The hell with the building, we will leave it open.” Ed’s open-air trading post was born. Soon the Kactus Kafe, a gas station, and cabins were added to the camp. Today, it sits lonely and abandoned, piled with iron bed frames, rocks, old tires, railroad ties, and other debris. Regardless of its junky condition, there is a residence nearby and the entire area is very strongly posted “no trespassing”. Across Route 66 from the camp, on the rocky hillside, can still be seen large white letters spelling “ED’S CAMP”. 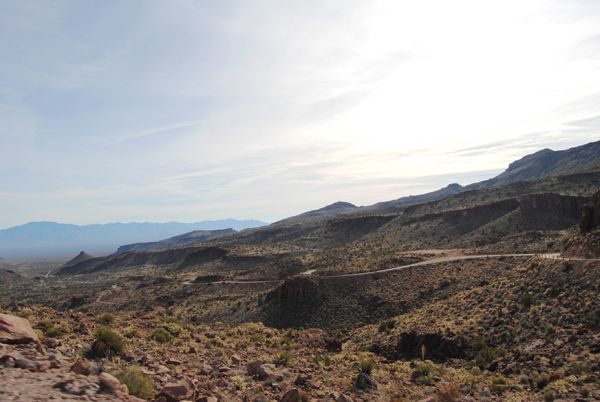 At this point, Oatman Highway begins to live up to its reputation as the road becomes narrow and steep along Sitgreaves Pass rising to an elevation of 3,550 feet as it reaches the Black Mountains. The pass through the Black Mountain range was named for Captain Lorenzo Sitgreaves, who led a combined American scientific and military expedition to explore the Zuni River, the Little Colorado River and the Colorado River in 1851. Setting out from northern New Mexico, the expedition traveled west across Arizona and then south along the Colorado River to Fort Yuma in California. Specifically, the expedition was sent to map the riverways and determine if they could be navigated by river steamers.

As you climb toward Sitgreaves Pass, the narrow road makes a number of hairpin turns, and hugs the mountainside, with no shoulders and few guardrails. In the early days of Route 66, when vehicles had little power, the only way up the 3,550-foot grade was sometimes by driving backward. Driving in the lower gear of reverse solved the problem of early gravity-fed fuel systems. Those who weren’t so daring could hire a team of horses to pull their Model Ts to the summit. For others, wreckers who were solely in the area to solve the problem would haul the stranded motorists over the summit, no doubt making a tidy little profit. Some flatlanders, petrified by the steep incline and winding road, simply paid a local to drive their car over the summit. 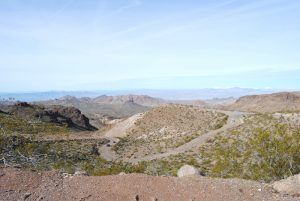 View from the summit of Sitgreaves Pass, Arizona by Kathy Weiser-Alexander.

When you reach the summit, there is a pull off with a great view of the surrounding area. Soon you will begin to see signs of old mining operations and the active Gold Road operation before reaching the town of Oatman that beckons with its Old West attitude and guarantees a fun-filled day along old Route 66.