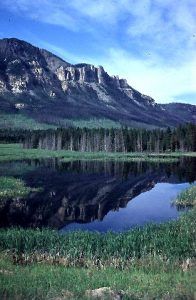 Our valley in northwest Wyoming was only settled by white men a little over a century ago, hardly a blip in history compared to at least 9,000 years of habitation by Native Americans. One cannot live long in this land of spectacular natural beauty without becoming aware of a previous culture that carved out a unique lifestyle. They lived very much in harmony with nature.

We often find stone tools like arrowheads, hatchets, scrapers, awls, and chippings, which give silent testimony to great activity over the millennia. There is a spot near the ranch just below some awe-inspiring pillars of rock on a high point which reminds me of the Acropolis with a superb view of the Wind River Valley and the snowcapped mountains beyond. Heaps of chippings lie there in great profusion, attesting that craftsmen worked here for years to make their stone tools.

The Sheep Eaters (named after their staple diet), or Tukudeka, lived high in mountain fastnesses also favored by the bighorn sheep they ate. They were a branch of the Shoshone. Both Indians and sheep found a precarious niche in rugged mountain country at higher altitudes.

Even in winter, like many sheep, they sought the windswept slopes at high altitudes where there was little snow and travel was easier, especially on the southern exposures. Their dwellings were in caves and wickiups in sheltered canyons high in the mountains. They used the mountain ridges as routes for travel rather than river valleys like the tribes frequenting lower levels. They were expert craftsmen, especially famous for their tremendously powerful compound bows made mainly from laminated bighorn sheep horns. These bows were highly sought-after trade items with other tribes. They are said to have been capable of driving an arrow straight through a buffalo. 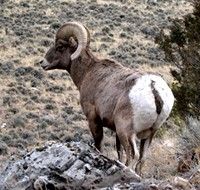 Tucked away in the mountains behind the ranch, traces can still be found of the sheep traps the Indians used to catch the wild sheep. They built wooden fences as wings to drive them into narrow corrals where they could be killed. We found a wickiup in a remote, narrow canyon, an hour’s walk from the main lodge. The sticks are still standing in this sheltered place after at least 140 years.

Tony Taylor has written a hauntingly beautiful little book about these people called Alpine Sentinels, published by Brushhog Books. He describes how in the mid-1700s, the Plains Indian Tribes acquired the horse and the gun. This caused a technological revolution that transformed their way of living by making the buffalo much easier to hunt and facilitating travel, transport, and warfare.

In Taylor’s words, the Plains Indian culture turned toward abundance, speed, power, and mobility, forsaking most old ways. On the other hand, the Sheep Eaters clung to their ancient culture and still depended on reverence, cunning, simplicity, and finesse.

Sadly, the advent of the white man and his diseases like smallpox decimated the Sheep Eaters. At about the same time, diseases brought in by domestic sheep nearly wiped out the bighorn sheep herds, and the surviving Indians had to move to the Wind River Indian Reservation, where they sought refuge with their Shoshone cousins.

By Bayard Fox. Compiled and edited by Kathy Weiser-Alexander/Legends of America, updated November 2021.

About the Author:  Bayard Fox is a Yale graduate who is widely traveled and speaks several languages. Fox established the Bitterroot Dude Ranch in Dubois, Wyoming, in 1971. Operated by Bayard, his wife Mel, and their son Richard, the ranch creates outstanding horseback riding vacation opportunities, unique among dude ranches. Visit the Bitterroot Dude Ranch website at http://www.bitterrootranch.com/