The greatest of American gold stampedes, and perhaps the greatest of the world, not even excepting that of Australia, was that following upon the discovery of gold in California. For twenty years all the West was mad for gold. No other way would serve but the digging of wealth directly from the soil. Agriculture was too slow, commerce too tame, to satisfy the bold population of the frontier. The history of the first struggle for mining claims in California — one stampede after another, as this, that and the other “strike” was reported in new localities — was repeated all over the vast region of the auriferous mountain lands lying between the plains and California, which were swiftly prospected by men who had now learned well the prospector’s trade.

The gold-hunters lapped back on their own trails, and, no longer content with California, began to prospect lower Oregon, upper Idaho, and Western Montana. 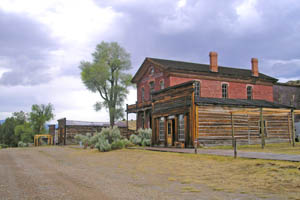 Walla Walla, Washington was a supply point for a time. Florence and Lewiston, Idaho were great mountain markets. One district after another sprang into prominence, to fade away after a year or two of feverish life. The placers near Bannack, Montana caught a wild set of men, who surged back from California.

Oro Fino was a temporary capital; then the fabulously rich placer which made Alder Gulch one of the quickly perished but still unforgotten diggings.

The flat valley of this latter gulch housed several “towns,” but was really for a dozen miles a continuous string of miners’ cabins. The city of Helena is built on the tailings of these placer washings, and its streets are literally paved with gold even today. Here in 1863, while the great conflict between North and South was raging, a great community of wild men, not organized into anything fit to be called society, divided and fought bitterly for control of the apparently exhaustless wealth which came pouring from the virgin mines.

These clashing factions repeated, in an intensified form, the history of California. They were even more utterly cut off from the world. Letters and papers from the states had to reach the mountains by way of California, via the Horn or the Isthmus. Touch with the older civilization was utterly lost; of law there was none.

Upon the social horizon now appeared the sinister figure of the trained desperado, the professional bad man. The business of outlawry was turned into a profession, one highly organized, relatively safe, and extremely lucrative. There was wealth to be had for the asking or the taking. Each miner had his buckskin purse filled with native gold. This dust was like all other dust. It could not be traced nor identified; and the old saying, ‘”Twas mine, ’tis his,” might here of all places in the world most easily become true. Checks, drafts, currency as we know it now, all the means by which civilized men keep a record of their property transactions, were unknown. The gold scales established the only currency, and each man was his own banker, obliged to be his own peace officer and the defender of his own property.

Now our desperado appeared, the man who had killed his man, or, more likely, several men, and who had not been held sternly to an accounting for his acts; the man with the six-shooter and the skill to use it more swiftly and accurately than the average man; the man with the mind which did not scruple at murder. He found much to encourage him, little to oppose him. The crowd from both East and West had now arrived. 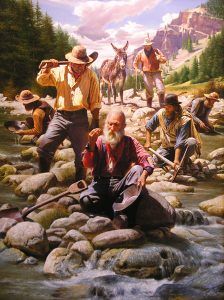 The town was full of gold hunters. Expectation lighted up the countenance of every new-comer. Few had yet realized the utter despair of failure in a mining camp. In the presence of vice in all its forms, men who were staid and exemplary at home laid aside their morality like a useless garment and yielded to the seductive influences spread for their ruin.

The gambling-shops and hurdy-gurdy saloons — beheld for the first time by many of these fortune-seekers — lured them on step by step, until many of them abandoned all thought of the object they had in pursuit for lives of shameful and criminal indulgence. The condition of society thus produced was fatal to all attempts at organization, either for protection or good order.

Yet the same condition made the opportunity for those who did not wish to see a society established. Wherever the law-abiding did not organize, the bandits did; and the strength of their party, the breadth and boldness of its operations, and the length of time it carried on its unmolested operations form one of the most extraordinary incidents in American history. They killed, robbed, and terrorized over hundreds of miles of mountain country, for years setting at defiance all attempts at their restraint. They recognized no command except that of their “chief,” whose title was always open to contest, and who gained his own position only by being more skillful, more bloodthirsty, and more unscrupulous than his fellows.

Henry Plummer, the most important captain of these cut-throats of the mountains, had a hundred or more men in his widely scattered criminal confederacy. More than one hundred murders were committed by these banditti in the space of three years. Many others were, without doubt, committed and never traced. Dead bodies were common in those hills, and often were unidentified. The wanderer from the States usually kept his own counsel. None knew who his family might be; and that family, missing a member who disappeared into the maw of the great West of that day of danger, might never know the fate of the one mysteriously vanished.

These robbers had their confederates scattered in all ranks of life. Plummer himself was sheriff of his county and had confederates in deputies or city marshals. This was a strange feature of this old desperadoism in the West — it paraded often in the guise of the law. We shall find further instances of this same phenomenon. Employees, friends, officials — there was none that one might trust. The organization of the robbers even extended to the stage lines, and a regular system of communication existed by which the allies advised each other when and where such and such a passenger was going, with such and such an amount of gold upon him. The holding up of the stage was something regularly expected, and the traveler who had any money or valuables drew a long breath when he reached a region where there was really a protecting law. Men were shot down in the streets on little or no provocation, and the murderer boasted of his crime and defied punishment. The dance halls were run day and night. The drinking of whiskey, and, moreover, bad whiskey, was a thing universal. Vice was everywhere and virtue was not. Those few who had an aim and an ambition in life were long in the minority and, in the welter of a general license, they might not recognize each other and join hands.

Murder and pillage ruled, until at length the spirit of law and order, born anew of necessity, grew and gained power as it did in most early communities of the West. How these things in time took place may best be seen by reference to the bloody biographies of some of the most reckless desperadoes ever seen in any land.

Go To Next Chapter – Henry Plummer in The Story of the Outlaw, by Emerson Hough

About the Author:  Excerpted from the book The Story of the Outlaw: A Study of the Western Desperado, by Emerson Hough; Outing Publishing Company, New York, 1907. This story is not verbatim as it has been edited for clerical errors and updated for the modern reader. Emerson Hough (1857–1923).was an author and journalist who wrote factional accounts and historical novels of life in the American West. His works helped establish the Western as a popular genre in literature and motion pictures.  For years, Hough wrote the feature “Out-of-Doors” for the Saturday Evening Post and contributed to other major magazines. 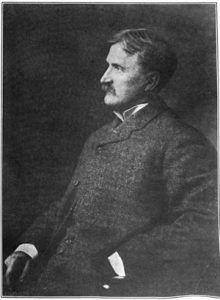