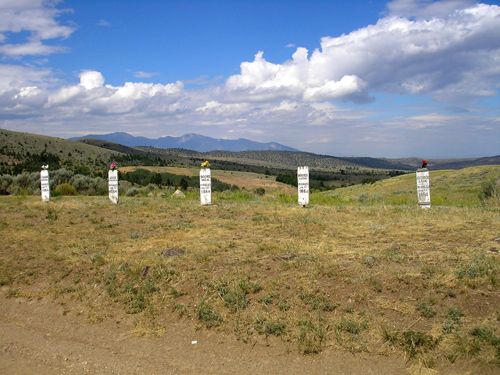 “Did he die game?” is one of the questions asked by bad men among themselves. “Did he die with his boots on?” is another. The last was the test of actual or, as it were, of professional badness. One who admitted himself bad was willing to die with his boots on. Honest men were not, and more than one early Western man fatally shot had his friends take off his boots before he died so that he might not go with the stain of desperadoism attached to his name.

Some bad men died unrepentant and defiant. Others broke down and wept and begged. A great oblivion enshrouds most of these utterances, for few Vigilante movements ever reached importance enough to permit those who participated to make publicly known their own participation in them. Indeed, no man ever concerned in a law and order execution ever liked to talk about it.

Tradition, however, has preserved the exact utterances of many bad men. The report is preserved, in a general way, of many of the rustlers hung by the cattlemen in the “regulator” movement in Montana, Wyoming, and Nebraska in the late 1870s. “Give me a chew of tobacco, folks,” said one. “Meet you in hell, fellows,” remarked others of these rustlers when the last moment arrived.

Sheriff Henry Plummer was hanged from the very
gallows that he, himself had built earlier in the year.

“So long, boys,” was a not infrequent remark as the noose tightened. Many of these men were brave, and some of them were hung for what they considered no crime.

Henry Plummer, whose fate has been described in a previous chapter, was one of those who died in a sense of guilt and terror. His was a nature of some sensitiveness, not callous like that of Boone Helm. Plummer begged for life on any terms, asked the Vigilantes to cut off his ears and hands and tongue, anything to mark him and leave him helpless, but to leave him alive. He protested that he was too wicked to die, fell on his knees, cried aloud, and made promises. On the whole, his end hardly left him enshrouded with much glamour of courage; although the latter term is relative in the bad man, who might be brave at one time and cowardly at another, as was often proved.

Ned Ray and Buck Stinson died full of profanity and curses, heaping upon their executioners all manner of abuse. They seemed to be animated by no understanding of a life hereafter and were concerned only in their animal instinct to hold on to this one as long as they might. Yet Stinson, of a good Indiana family, was a bright and studious and well-read boy, of whom many good things had been predicted.

Dutch John [Wagner,] when faced with death, acted much as his chief, Henry Plummer, had done. He begged and pleaded, and asked for mutilation, disfigurement, anything, if only he might still live. But, like Plummer, at the very last moment, he pulled together and died calmly. “How long will it take me to die?” he asked. “I have never seen anyone hanged.” They told him it would be very short and that he would not suffer much and this seemed to please him. Nearly all these desperadoes seemed to dread death by hanging. The Territory of Utah allowed a felon convicted under the death penalty to choose the manner of his death, whether by hanging, beheading, or shooting; but no record remains of any prisoner who did not choose death by shooting. A curiosity as to the sensation of banging was evinced in the words of several who were hung by Vigilantes.

In the largest hanging made in this Montana work, there were five men executed one after the other: Clubfoot George, Hayes Lyons, Jack Gallagher, Boone Helm, and Frank Parish, all known to be members of the Plummer gang. George and Parish at first declared that they were innocent — the first word of most of these men when they were apprehended. Parish died silently. George had spent some hours with a clergyman and was apparently repentant. Just as he reached the box, he saw a friend peering through a crack in the wall. “Good-bye, old fellow,” he called out and sprang to his own death without waiting for the box to be pulled from under his feet. 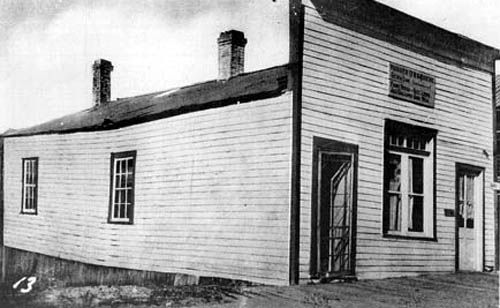 Hayes Lyons asked to see his mistress to say good-bye to her before he died but was refused. He kept on pleading for his life to the very last instant, after he had told the men to take his body to hi, mistre8S for burial. This woman was really the cause of Lyons‘ undoing. He had been warned and would have left the country but for her. A woman was very often the cause of a desperado’s apprehension.

Jack Gallagher in his last moments was, if possible, more repulsive even than Boone Helm. The latter was brave, but Gallagher was a coward, and spent his time in cursing his captors and pitying himself. He tried to be merry. “How do I look with a halter around my neck?” he asked facetiously of a bystander. He asked often for whiskey and this was given him. A moment later he said, “I want one more drink of whiskey before I die.”

This was when the noose was tight around his neck, and the men were disgusted with him for the remark. One remarked, “Give him the whiskey”; so the rope, which was passed over the beam above him and fastened to a side log of the building, was loosened to oblige him. “Slack off the rope, can’t you,” cried Gallagher, “and let a man have a parting drink.” He bent his head down against the rope and drank a tumblerful of whiskey at a gulp. Then he called down curses on the men who were about him, and kept it up until they cut him short by jerking away from the box from under his feet.

A peculiar instance of the unconscious, but grim, humor was afforded at Gallagher’s execution. Just as he was led to the box and ordered to climb up, he drew a pocketknife and declared he would kill himself and not be hanged in public. A vigilante covered him with a six-shooter. “Drop that, Jack,” he exclaimed, “or I’ll blow your head off.” So Gallagher, having the choice of death between shooting, hanging or beheading, chose to hang after all! He was a coward.

Cy Skinner, when on the way to the scaffold, broke and ran, calling on his captors to shoot. They declined and hanged him. Alex Carter, who was on the fatal line with Skinner in that lot, was disgusted with him for running. He asked for a smoke while the men were waiting, and died with a lie on his lips-ell am innocent.” That is not an infrequent declaration of criminals at the last. The lie is only a blind clinging to the last possible means of escape and is the same as the instinct for self-preservation, a crime swallowed up in guilt.

Johnny Cooper wanted a “good smoke” before he died, and was given it. Bob Zachary died without fear, and praying for forgiveness on his executioners. Steve Marshland asked to be pardoned because of his youth. “You should have thought of that before,” was the grim reply. He was adjudged old enough to die, as he had been old enough to kill.

George Shears was one of the gamest of the lot. He seemed indifferent about it all after his capture, and, when he was told that he was to be hanged, he remarked that he ought to be glad it was no worse. He was executed in the barn at a ranch ‘where he was caught, and, conveniences being few, a ladder was used instead of a box or other drop. He was told to ascend the latter, and did 80 without the least hesitation or evidence of concern. “Gentlemen,” said he, “I am not used to this business, never having been hung before. Shall I jump off or slide off?” They told him to “jump, of course,” and he took this advice. “All right. Goodbye!” he said and sprang off with unconcern.

Whiskey Bill was not given much chance for last words. He was hung from horseback, the noose being dropped down from a tree to hi, neck as he sat on a horse behind one of the Vigilantes. “Goodbye, Bill,” was the remark of the latter, as he spurred his horse and left Bill hanging.

One of the most singular phenomena of these executions was that of Bill Hunter, who, while hanging by the neck, went through all the motions of drawing and firing his six-shooter six times. Whether the action was conscious or unconscious it is impossible to tell.

Bill Bunton resisted arrest and was pugnacious, of course declaring his innocence. At last, he showed great gameness. He was particular about the manner in which the knot of the rope was adjusted to his neck, seeming, as did many of these men, to dread any suffering while hanging. He asked if he might jump off the platform himself, and was told he might if he liked. “I care no more for hanging,” he explained, “than I do for taking a drink of water, but I’d like to have my neck broken. I’d like to have a mountain three hundred feet high to jump off from. Now, I’ll give you the time: One – two—three. Here goes!”

Go To Next Chapter – Joseph A. Slade

Excerpted from the book The Story of the Outlaw; A Study of the Western Desperado, by Emerson Hough; Outing Publishing Company, New York, 1907. This story is not verbatim as it has been edited for clerical errors and updated for the modern reader. Emerson Hough (1857–1923).was an author and journalist who wrote factional accounts and historical novels of life in the American West. His works helped establish the Western as a popular genre in literature and motion pictures.  For years, Hough wrote the feature “Out-of-Doors” for the Saturday Evening Post and contributed to other major magazines.