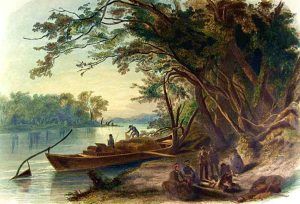 Mackinaw boat on the Missouri River.

Mike Fink, a character in early Western history, whose well-authenticated performances were so remarkable as to appear rather the creations of fancy than actual occurrences, was a native of Pittsburg, Pennsylvania. He had little education and made ridicule of what he had. He used to spell his name Micke Phinck and he loved to affect the extremes of barbarous jargon that characterized the language of the unlettered boatmen on the Western rivers.

Mike early became fascinated with the boatman’s life, and the sound of the boat horn was his most entrancing music. He learned to imitate its notes so that when he first took service in a keelboat he could fill the office of trumpeter without any instrument. The river life suited his tastes and he longed to visit its remotest ports — even New Orleans, Louisiana, where he had heard that the people spoke French and wore their Sunday clothes all the week.

When the water was too low for navigation Mike spent most of his time in Pittsburg and vicinity, killing squirrels and shooting at a target for beef at the frequent Saturday shooting matches and company musters of the militia.

He soon became renowned as the best shot in the country, acquiring the soubriquet of “Bangall,” and on account of his extraordinary skill, he was excluded from participation in the matches. As a price for this exclusion, he was allowed the “fifth quarter” of the beef, as it was called — the hide and tallow. His usual practice was to exchange his “quarter” at a dram shop for whiskey, with which he treated everybody and particularly himself. He became fond of strong drink, but never was intoxicated. He could drink a gallon in 24 hours and not show any effects of it.

His language was a perfect sample of the half-horse, half-alligator dialect of the early race of boatmen. He was a good deal of wit, a quality which won him the admiration, but at the same time excited the fears, of the whole boating fraternity; for he usually enforced his jokes with a sound beating if anyone had the temerity to refuse to laugh at them. He used to say that he told his jokes to be laughed at and that no one should make light of them. The consequence was that Mike always had about him a band of laughing sycophants who were as afraid of his frown as a vassal might be of the displeasure of his lord.

Mike used to proclaim himself — “I am a Salt River roarer, and I love the winning, and as how I am chock full of fight.” And indeed he had a lady in every port who would “fight their deaths” in his defense.

Among his confederates were two men conspicuous for their prowess and were Mike’s fast and confidential friends. Their names were William Carpenter and Levi Talbot. Each of the three was a match for the other in fighting and in marksmanship and was adept in the virtues and mysteries of Mike’s calling.

Mike’s weight was about 180 pounds. He was five feet nine inches high; with broad, round face and pleasant features; brown skin, tanned by the sun and the rain; blue but very expressive eyes, inclining to gray; broad white teeth; and square, brawny form, well proportioned, with every muscle fully developed, indicating the greatest strength and activity. Except as to stature he was a perfect model for a Hercules.

As already stated, he was an expert marksman, and many of his shooting feats have been related by those who profess to have witnessed them. On one occasion while ascending the Mississippi River above the mouth of the Ohio River, he saw a sow with eight or nine pigs on the river bank. He declared in boatman phrase that he “wanted pig,” and took up his rifle to shoot one. He was requested not to do so, but he nevertheless laid his rifle to his face, and as the boat glided up the river under easy sail, some 40-50 yards from shore, he shot at one pig after another, cutting their tails off close to their bodies, but not doing them any other harm! 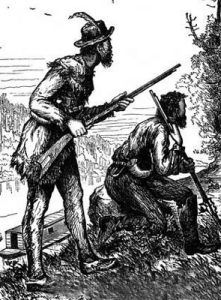 In 1821, while standing on the levee in St. Louis, Missouri, he saw a black boy on the river bank listlessly gazing at what was going on around him. He had a remarkably shaped foot peculiar to some African tribes. His heel protruded to the rear so far that his foot seemed to be as much in the rear as in front of the leg. This unshapely form offended Mike’s eye and outraged his sense of symmetry. He determined to correct it. Lifting his rifle at 30 paces he actually shot the heel away, inflicting an ugly wound. The boy dropped to the ground, screaming “murder!” Mike was indicted in the circuit court of the county, tried and found guilty. His plea in justification of the offense was that he wanted to fix the boy’s foot so that he could wear a genteel boot. Mike’s punishment, which is not stated, could not have been very severe, for he was at liberty in the spring of 1822. Mike’s particular friend, William Carpenter, was also a great shot, and it was a common thing for him and Mike to fill a tin cup with whiskey and shoot it from each other’s heads at a distance of 70 yards. The feat was always performed successfully, the cup being bored through without injury to the person supporting it. It was a favorite performance with these two men, who regarded it as a fresh avowal of their confidence in each other.

Mike had first visited St. Louis, Missouri in 1814 or 1815 and was there frequently afterward. In 1822 he and his two friends, Talbot and Carpenter, enlisted in the company which William Henry Ashley and Andrew Henry were organizing for their attempt to open up a trade with the mountain tribes. They enlisted in the threefold character of boatmen, trappers, and hunters. The company ascended as far as to the mouth of the Yellowstone River, where a fort was constructed, from which the party was sent out in detachments to trap on the tributaries of the Missouri and the Yellowstone Rivers. Mike and his friends, with nine others, went to the Musselshell River, where they found a warm and commodious habitation for the winter. 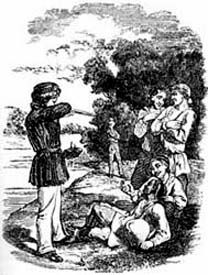 During their sojourn here Fink and Carpenter fell into a deadly quarrel, but it was smoothed over for the time by the interposition of friends. The cause is not certainly known, but there seems to have been a woman in the case, an Indian woman for whose good graces they had become rivals. On the arrival of spring, the little party visited the fort, and here, over a draught of whiskey, they renewed their smothered quarrel. Again they made a treaty of peace, and in evidence of their sincerity, Mike proposed that they repeat their familiar feat of shooting the whiskey cup from each other’s head. This would not only be a test of reconciliation, but of mutual trust and confidence as well.