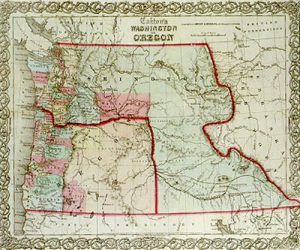 1775 Bruno de Hezeta lands on the Washington coast and claims the area for Spain. On his return south, he sees the mouth of the Columbia River. 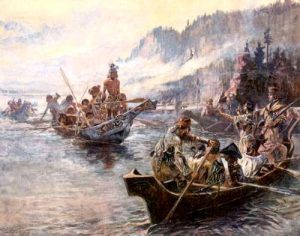 1811 John Jacob Astor builds Fort Astoria at the mouth of the Columbia River as part of his Pacific Fur Company.

1818 United States and Great Britain agree to joint occupation of the Oregon Territory.

1824 Bureau of Indian Affairs is set up in the War Department.

Russia sets its southern boundary in the Pacific Northwest at 54 degrees, 40 minutes.

1834 The Whitman Party, including Dr. Marcus Whitman and his wife Narcissa and also Reverend H. H. Spalding and his wife Eliza set up mission at the junction of the Columbia and Snake Rivers. Their travel route would become known as the Oregon Trail and used by thousands of future settlers.

1839 Fr. Pierre-Jean DeSmet arrives among the Flatheads in the Bitterroot Valley. He and his staff would set up a number of Jesuit missions in present-day states of Washington and Idaho.

1842 John C. Fremont leads an Army Topographical Corps’ Expedition to the Rocky Mountains. He witnesses an eruption of Mt. St. Helens. His maps of this expedition and one the following year are printed by the government and are widely used by pioneers heading west.

1843 The Great Migration, a rush of approximately 1,000 pioneers, head out on the Oregon Trail, led by Dr. Marcus Whitman.

1846 The U.S. and Great Britain divide the Northwest region along the 49th parallel. 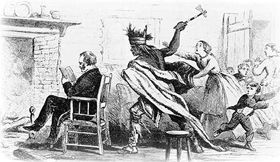 1847 The inhabitants of Whitman Mission are killed by Cayuse Indians.

1851 Setters from the Denny Party find what would become Seattle.

1854-1856 A number of treaties are signed between Native Americans living in Washington Territory and the U. S. government. 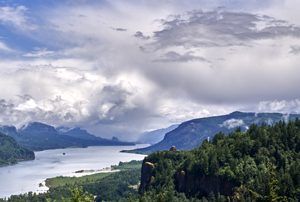 1860s Gold and silver discovered in the Okanogan.

1871 Indian Appropriations Act states that Indians are no longer considered sovereign nations but wards of the federal government.

1872 The Northern Pacific Railroad chooses Tacoma as its western terminus.

The American-British border dispute in the San Juan islands is settled via arbitration by the German emperor, Kaiser Wilhelm.

President Ulysses S. Grant establishes the Colville Confederated Tribes through an Executive Order, not a treaty. The reservation lands are reduced later that year following complaints of Colville Valley settlers.

1887 Dawes Severalty Act is passed. Indian lands are split into individual allotments, with remaining lands becoming public and therefore up for sale. 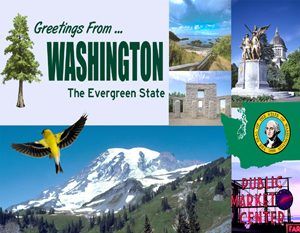 1889 Washington is admitted as the 42nd state in the union.

1897 The first shipment of gold from the Klondike reaches Seattle.

1910 Women gain the right to vote in Washington.