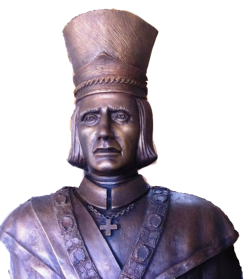 Juan de Fuca was a Greek navigator who sailed for Spain under a Spanish name. His original name was Ioannis Phokas. De Fuca sailed up the western coast of North America from Mexico to Vancouver Island in 1592, looking for a passage from the Pacific Ocean to the Atlantic Ocean. He was perhaps the first European to see this area. After sailing back to Acapulco, Mexico, de Fuca was not rewarded by Spain for his journey. His discovery of the strait was not entirely believed until Captain Vancouver retraced de Fuca’s route 200 years later.

Ioannis Phokas came from the village of Valeriano located on the Elios Valley at the Southwestern tip of Cephalonia. The extension of the Spanish dominion on the neighboring shores of Italy provided many opportunities to the seafaring men of the Ionian Islands to serve on Spanish ships as crews or officers. Taking advantage of these opportunities, Phokas went to Spain, where he embarked on Spanish ships as a sailor, and he took on the Spanish name of Juan de Fuca. Proving to be very skilled, he soon was captaining the ships and attracted the attention of the King of Spain, who appointed him Pilot of his navy in the West Indies, a position which he kept for over 40 years.

Fuca’s early voyages were to the Far East, but his voyages would later be expanded, and he claimed to have arrived in New Spain in 1587 off Baja California. Before he made his famous trip up the northwest coast of North America, he sailed to China, the Philippines, and Mexico. He would later be ordered by the Viceroy of New Spain, Luis de Velasco, to travel with an expedition to find the fabled Strait of Anian, believed to be a Northwest Passage, a sea route linking the Atlantic and Pacific Oceans. The first voyage saw 200 soldiers and three small ships under the overall command of a Spanish captain. Still, it failed when the soldiers mutinied due to his misconduct, and the ships had to return from California to Mexico, where the Captain was duly punished. 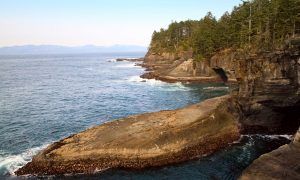 In 1592, a second voyage was sent, at which time he discovered the Strait of Juan de Fuca, which was named for him. He then returned to Mexico, claiming to have found the passageway. Despite Velasco’s repeated promises, Fuca never received the great rewards he claimed as his due. After two years, Fuca traveled to Spain to make his case to the court in person. But he was to be disappointed again and returned to his homeland. He died in 1602.