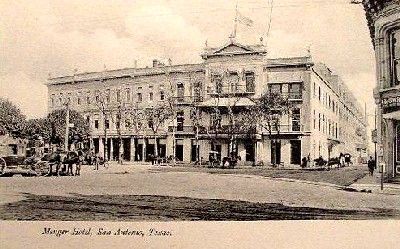 On the National Register of Historic Places, the Menger Hotel is one of the best known and oldest hotels in the state of Texas. Continuing to cater to travelers today, the hotel is also said to be home to several resident ghosts.

Opened by William Menger on February 1, 1859, the hotel was constructed on the site of Menger’s brewery, the first brewery in Texas. Said to have been the finest hotel west of the Mississippi River, it once hosted such notables as Sam Houston, Generals Lee and Grant and Presidents McKinley, Taft, Eisenhower, and Roosevelt; Babe Ruth, and Mae West.

Menger, a German immigrant, arrived in San Antonio in the early 1840s and operated a brewery at the site with Charles Phillip Degen. In 1857 he and decided to build a hotel to accommodate the many carousers who frequented his brewery. Soon, he hired local architect, John M. Fries to design the two-story cut-stone building, which featured an abundance of classical detail.

The hotel was so successful that Menger immediately made plans to build an addition between the hotel and his brewery. Construction on a forty-room annex was begun in August 1858 and completed the following year. The hotel featured a tunnel opening off the basement, through which Menger led groups of selected guests on tours of the adjacent brewery. Menger died at the hotel in March 1871, and his widow and son took over the management.

When the Civil War and Reconstruction were over, and especially after the railroad arrived in 1877, the Menger became the best-known hotel in the Southwest. It was praised for the cuisine offered in the Colonial Dining Room, which included such specialties as wild game, mango ice cream, and snapper soup made from turtles caught in the San Antonio River.

An east wing was added in December 1881. Hermann Kampmann became manager in 1887 and supervised the installation of a new bar, a replica of the taproom in the House of Lords Club in London. The solid cherry bar, cherry-paneled ceiling, French mirrors, and gold-plated spittoons were the marvels of San Antonio. The beer was chilled by the Alamo Madre ditch, which passed through the hotel courtyard, mint juleps were served in solid silver tumblers, and hot rum toddies came to have wide renown. Theodore Roosevelt first visited the Menger in 1892 on a javelina hunt; he returned to recruit his Rough Riders at the hotel in 1898; and in 1905 he was back for a banquet.

In 1909 the hotel was again enlarged with an addition to the south side. Architect Alfred Giles altered the main façade, adding Renaissance Revival details in stuccoed brick, pressed metal, and cast iron; he also designed an interior rotunda that provided light and served as a circulation hub. The hotel was a center of San Antonio social affairs and a meeting place for visiting celebrities. It declined during the Great Depression, but in the mid-1940s the building was reconditioned, and the more celebrated dining rooms were restored. By 1951 a new wing had been added, and the building had been completely modernized. In 1976 the hotel was added to the National Register of Historic Places as part of the Alamo Plaza Historic District. The Menger was again renovated in the 1980s. 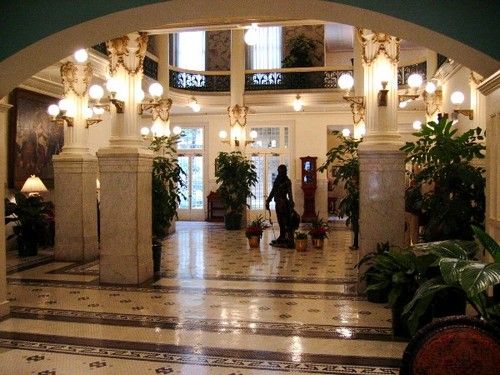 Inside the lobby of the Menger Hotel

In addition to its significance as a historical landmark, the Menger offers unparalleled amenities that continue to include the famous Colonial Room Restaurant and the Menger Bar along with 316 guest rooms and suites. Many rooms overlook the Alamo, pool or Alamo Plaza and all retain the furniture, art, and accessories from the hotel’s earlier days, including four-poster beds, velvet-covered Victorian sofas and chairs, marble-topped tables and period wall coverings.

As to its resident ghosts, the historic Menger Hotel is said to be called home or visited regularly by some 32 different entities. Seemingly, they don’t mind sharing the old hotel with the living, as they pleasantly go about their business.

The Menger’s most famous spiritual guest is that of former President Teddy Roosevelt. It was here, in the Menger Bar, that Roosevelt recruited hard-living cowboys fresh from the Chisholm Trail, to his detachment of Rough Riders. Reportedly, Teddy would sit at the bar and as the cowboys came in, he would jovially offer them a free drink (or several) as he worked his recruiting strategy upon the unsuspecting cowpoke. Many sobered up the next morning to find themselves on their way to basic military training at Fort Sam Houston before joining in the Spanish American War. Over the years, Roosevelt has reportedly been seen having a drink at the dark little barroom off the main lobby.

The most often sighted spiritual guest is a woman named Sallie White. Long ago, Sallie was a chambermaid who worked within the hotel and one night after an argument with her husband, she stayed overnight. The next day her husband threatened to kill her and sometime later, on March 28, 1876, he attacked her inside the hotel. Badly injured, she held on for two days before dying of her injuries.  According to the hotel’s ledgers, it paid for her funeral at a cost of $32.00.

Today, Sallie apparently continues to perform her duties within the Victorian wing of the hotel. Sallie has been seen numerous times wearing an old long gray skirt and a bandana around her forehead, the uniform common during her era. Primarily, appearing at night, Sallie is generally seen walking along the hotel hallways, carrying a load of clean towels for the guests.

Another apparition that is often reported is that of Captain Richard King, one-time owner one of the largest ranches in the world – The King Ranch. A frequent visitor to the Menger Hotel during his lifetime, he had a personal suite within the hotel. When he learned of his impending death from his personal physicians, Captain King spent the last months of his life, wrote his will disposing of his great wealth, and bade farewell to his friends in his suite at the Menger.  On April 15, 1885, King’s funeral was held in the Menger’s parlor. Today, the room in which he stayed is called the “King Ranch Room.” He is often seen entering his old room, going right through the wall where the door was once located before it was remodeled. Display cases and photographs on the walls of the first floor lobbies provide a glimpse into the Menger’s colorful past.

Another ghostly spirit of a woman is often spotted sitting in the original lobby of the historic hotel. Wearing an old fashioned blue dress, small wire-framed glasses, and a tasseled beret in her hair, she sits quietly knitting. On one occasion a staff member stopped to ask her, “Are you comfortable…may I get you something?”, only to be answered with an unfriendly “No” before the woman disappeared.

Another guest reported emerging from the shower to see an apparition dressed in a buckskin jacket and grey pants, who is busy having a heated conversation with an unseen presence. The entity demands to know; “Are you gonna stay or are you gonna go?” three times before vanishing.

Other entities have been known to “help” in the kitchen area, as various utensils have floated through the air seemingly all by themselves.  Utensils are often seen transporting themselves from one area to another without the help of human hands. 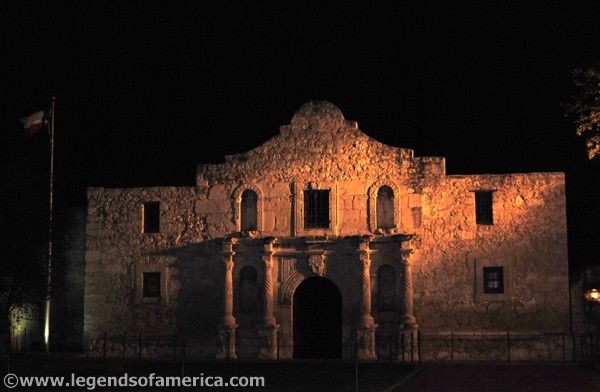 The Alamo at night., February 2011. Click for prints, downloads and products.

Adjacent to the Alamo, some of these ghostly visitors to the hotel are attributed to the many that died during the Battle of the Alamo. Often heavy footsteps and kicking are heard and old military boots are spied by the guests and staff.

Other spiritual guests are said to have been some of the many who have stayed there over the years, as well as those who were recruited into the Rough Riders. Though the number of entities counted at the historic Menger Hotel is high, all are said to be harmless to staff and visitors, doing nothing more than sometimes starling a guest or an employee.

The first choice of San Antonio ghost hunters, the hotel is located downtown, immediately adjacent to both the Alamo and the Rivercenter Mall. 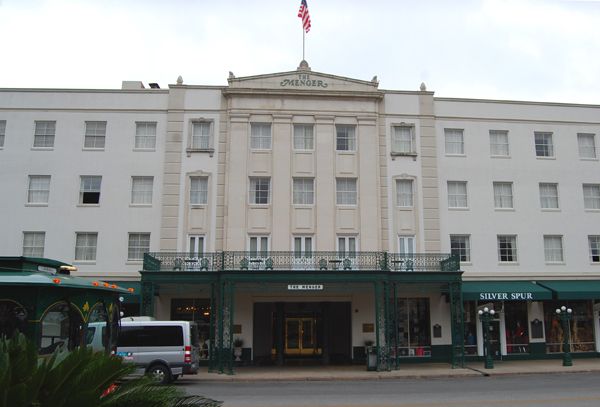 Constructed 23 years after the fall of the Alamo, San Antonio’s Menger Hotel is and has been since 1859, The Grande Dame of Alamo Plaza. Having hosted many celebrated personalities, including past presidents, military commanders, empire builders, cattle barons, etc. The Menger still serves as one of San Antonio’s premier hotels. Located on Alamo across from the Alamo, the historic Menger Hotel is a five-story hotel offering 320 rooms and suites.