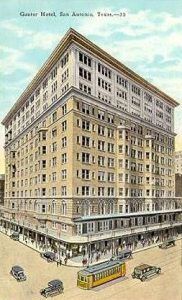 Originally dedicated on November 20, 1909, the historic Gunter Hotel’s roots date back to the first year of the Republic of Texas. In 1837, at the corner of what was then El Rincon and El Paseo Streets was the Frontier Hotel.  By the turn of the century, these streets had been renamed St. Mary’s Street and Houston Avenue and the intersection had become a vital part of San Antonio’s business center.

Jot Gunter, along with a group of investors, decided that a palatial new hotel would meet the demands of the state’s most progressive city and with that, the Gunter Hotel was born.  Designed by the same architectural firm that did the Hotel Adolphus in Dallas and the Galvez in Galveston, the magnificent hotel was the largest building in San Antonio at the time. The San Antonio landmark quickly established a reputation for excellence and became a favorite for business and leisure travelers from across the country.

Across the street from the Majestic Theater, the hotel has attracted its share of Hollywood celebrities, including Mae West and cowboy film stars Tom Mix, Roy Rogers, John Wayne, and Gene Autry. Other notable guests over the years included Presidents Franklin Roosevelt and Harry Truman.

In addition to serving the traveling public in fine style, the Gunter Hotel also has a more infamous past. In 1965, an unidentified woman was murdered at the historic hotel and her restless spirit is said haunt the premises.

It all started on February 2, 1965, when a blonde man in his late 20’s checked into room 636. Though he checked in alone, under the alias Albert Knox, he was soon seen over the next several days accompanied by a tall blonde sophisticated looking woman. 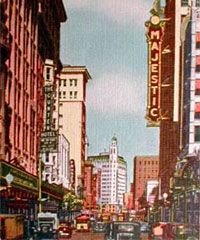 All was seemingly fine until an afternoon maid prepared to check the room on February 8th. Believing the “Do Not Disturb” sign on the door was an oversight, she turned the lock with her passkey.   However, the maid was shocked as she entered the room to find “Mr. Knox” standing beside a blood-soaked bed. Letting out a scream, the man put his index finger to his lips as if indicating that she should be quiet. He then gathered up a blood-soaked bundle and ran right past her and out the door.

Precious time was lost as the frightened maid told another maid, who told a bellhop, who finally told the manager. It was some forty minutes later before the police were finally called. Arriving within ten minutes, the two detectives encountered a grisly scene when they entered the room. The entire room was covered in blood, from the carpet, to the bathroom floor, to the walls, and the bed, the room was filled with the sticky remains of the woman’s lifeblood. Small pieces of flesh her also found in the bathroom, and the police theorized that the woman’s body had been butchered there, with some parts disposed of down the toilet.

Within days, the police tracked down a suspect checked in at the St. Anthony hotel a few blocks away. As they knocked on his door, they heard a shot from inside the room. The suspect, later identified as a man named Walter Emerick, had taken his own life.

Though a thorough search was made by police, the woman’s body was never found. Police theorized that Emerick may have disposed of the body in still-wet cement at one of the many construction projects that were taking place in San Antonio’s downtown area at the time.

Since this terrible incident, staff and guests have reported strange occurrences in the vicinity of room 636. The seemingly restless spirit has often appeared with her arms outstretched. Strange sounds of hammering have also been reported coming from an unoccupied Room 636. Others have reported the image of a blonde woman inexplicably appearing in photographs. Housekeeping staff has reported that new employees often quit after the first time they are assigned to clean the room. Where there is one spirit, others sometimes also linger. Other reports indicate that an elderly woman has also been to known to lurk about the hotel.

Several years ago the Gunter Hotel underwent an 8 million dollar renovation when it became part of the Sheraton Hotel Group. Today, the historic hotel provides 322 guest rooms and suites, furnished in the style of the Texas cattlemen’s club rooms of old. Fully updated, the hotel also offers all the amenities of a full-scale modern hotel, including the famous Sheraton Gunter Bakery, a restaurant, lounge, meeting facilities and more. 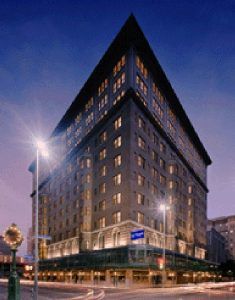 Obviously not wishing to celebrate its more infamous past, you may very well find the staff of the Sheraton unwilling to talk about the grisly murder or the alleged haunting.