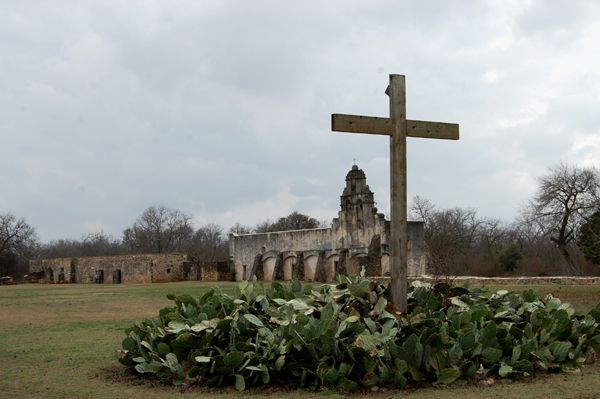 Just south of San Antonio, Texas, is the site of Texas’ most famous ghost story. Not far from the San Juan Mission is an intersection of the roadway that is crossed by railroad tracks. Whether this is an urban legend or truly a ghostly tale has long been forgotten in history. Reportedly, this is the site of a fatal accident in which a train collided with a school bus full of children in the 1930s or 1940s.

According to the legend, it was a rainy Texas morning as the train moved swiftly down the tracks when the engineer spied a school bus stalled along his path. Frantically pulling his break and tugging on the train whistle, the hulking engine quickly advanced toward the bus, unable to stop in time. Ten children reportedly lost their lives that day and continue to haunt the area, protecting others from a similar fate.

As the story goes, if you park your car directly over the tracks and shift into neutral, the ghosts of the children will push it uphill, out of the way of an oncoming train. And if you have the foresight to cover your bumper with baby powder or flour, you can reportedly see the children’s fingerprints upon your car.

This story has been featured on the popular television shows of Sightings, Unsolved Mysteries, as well as numerous Texas Magazines and newspapers. 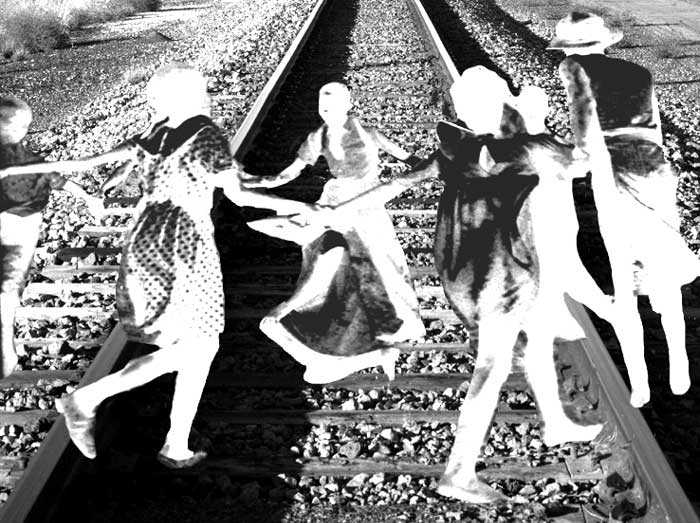 Despite the much-publicized story, its truth has been hotly debated in San Antonio and both area residents and local law enforcement are weary of the legend. Numerous accounts have been reported that cars do in fact inexplicably move on their own and mysterious prints are seen on vehicles. Others allege they have heard the voices and laughter of children while at the site.

However, in support of the San Antonio residents, there are no records of any such accident having occurred in the newspaper archives anywhere in Texas. It seems to us that an accident of such magnitude would have been reported somewhere.

Furthermore, official investigations into the events have determined that despite an illusionary appearance of a level, or even slightly inclined road, the street surface is actually at a two-degree declination. This would result in the natural rolling of a car parked in neutral. As to the fingerprints, these could easily be those that were already there. Even after washing, forensic studies have concluded that fingerprints can still occur.

As the curious from all over the country come to witness the paranormal phenomena, law enforcement is constantly forced to deal with traffic problems at the site, especially around Halloween. Area residents have grown extremely weary of the congestion and the drugs and alcohol that seemingly accompany many of the visitors. Unfortunately, a criminal element has also entered upon the scene as reports of car-jackings, purse snatchings, and worse, are perpetrated on the many curious and unsuspecting ghost hunters.

San Antonio is reportedly the most haunted city in the State of Texas with dozens of ghostly sites that are not debated. Perhaps it is time to give this legend a rest, along with local law enforcement and area residents.

I used to live in Seguin, Texas. I know many dispute the legend of the railroad track ghosts. However, I was witness to one very indisputable event there in my late teens, early 20s. Personally, I don’t think a tow degree declination is enough to push a 3600-pound car (2 tons with passengers) over those tracks with no starting momentum… But… 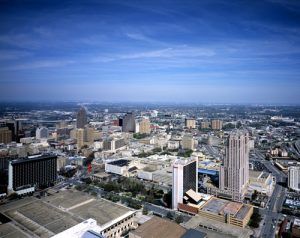 One afternoon, I had gone to the railroad tracks with a few friends. After having driven over the tracks a couple of times, we were chatting with some visitors who had already taken a Lincoln Continental (2.5 tons +) over the tracks once. They were a husband and wife, and a visitor from Mexico, who didn’t believe the event, accusing the husband, who was driving, of making the car roll. So, the husband and wife got out and let their Mexican visitor take the wheel for himself.

They staged the Lincoln about five yards back from the tracks, with the engine shut off. With their visitor in the driver’s seat, the car suddenly began to scream and slamming on the brakes. However, he could not stop the car until it completed its crossing of the tracks! He had also tried putting the transmission in park, but it still sped forward! I’ve never seen anyone so terrified. Once the car finally stopped, he jumped out, still screaming and shouting in Spanish, then demanded that his hosts take him back to his hotel, stating further that he was leaving and was never coming back!

I once went over in my 1968 Firebird convertible with a new parakeet in the car. The bird had been chirping happily, until we staged the vehicle for the tracks when suddenly his chirping was completely silenced. It wasn’t until we left the area that he began to chirp again.

Once, when I used the baby powder on my car, I had multiple small handprints and one set of adult-sized handprints. But, these handprints did not belong to me — they were larger than mine but smaller than my husband’s. I had had no children anywhere around my car previously and was extremely meticulous about the appearance of my car. Also, all the prints were either on the bumper (small prints) or the ridge of the trunk (adult & more small). The bumper is too low for most people to place their hands for anything other than pushing and all prints were with the fingertips pointed up, unlike if someone just touches the back of a car (usually if they’re sitting on the trunk or opening the trunk lid). When one washes their car with dish soap, oils from hands is removed, so no prints will remain.

Personally, I think the “experts” are “debunking” the myth so that people stop coming to the ghost tracks. The area has developed considerably since my visits, with a number of nearby residences. When I went, it was the “countryside” near an industrial area. Also, the targeting criminals probably live nearby; kids/teens. If their debunking helps divert unwelcome visitors, more power to them. However, I know the tracks myth is real!

Incidentally, I never went over the tracks with the engine running, unlike most who try this. Timeframe of my experiences there was mid-1970s to 1981.

Whether or not a bus did get struck by a train there, there is something psychic in the area. I personally think the spirits there go much farther back in history than the use of buses. Was there an orphanage there once? Did someone once stall there in a vehicle after the tracks were laid and got killed? Those are the questions the debunkers should be researching. — Myrene, Hawaii, May 2008

Reader’s Comments:  Probably someone has thought of this, but for the tiny handprints that come on the trunks of the cars, here’s an idea. Putting a cam coder or 8mm camera on the car, aiming at the baby powder (that is put on earlier) to actually see if the handprints appear while the car is being pushed over the tracks. I’ve seen different stories about this (on Discovery Channel, etc,) but no one has tried putting a camera on the car when this occurs. – Rich, October 2005 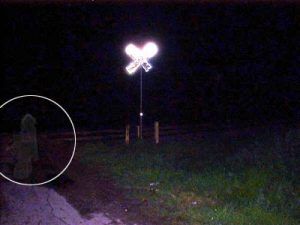