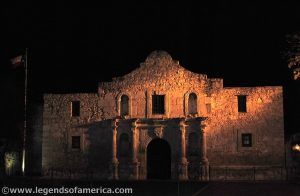 The muffled drum’s sad roll has beat
The soldier’s last tattoo;
No more on life’s parade shall meet
That brave and fallen few.
On fame’s eternal camping-ground
Their silent tents are spread,
And glory guards with solemn round
The bivouac of the dead.

The neighing troop, the flashing blade,
The bugle’s stirring blast,
The charge, the dreadful cannonade,
The din and shout are past;
Nor war’s wild note, nor glory’s peal
Shall thrill with fierce delight
Those breasts that never more may feel
The rapture of the fight.

Originally built as the Mission San Antonio de Valero, the Alamo first served as place to Christianize and educate the resident Indians in the late 1700’s. Throughout the later years and up to the 1830’s, the mission would become home to various outfits, including revolutionaries and rebels. It was during this time that the Alamo site was expanded to a fortress with high walls and numerous outbuildings.In 1836, self-proclaimed dictator, General Santa Anna, was determined to conquer the rebellious Texans of San Antonio and marched towards the settlement with a force more than 1,000 troops. When they arrived on February 23, 1836 about 145 Texans took refuge upon the fortified grounds of the Alamo, determined to fight off the Mexican Army. For the next 13 days, a raging battle ensued, between the Texans, under the joint command of William B. Travis for the regular army and Jim Bowie for the volunteers, and Santa Anna’s troops. Over this two week period, the Mexicans continued to fortify their numbers until as many as 4,000 men were bombarding the Alamo. The Texans also struggled to fortify their numbers, resulting in approximately 189 men defending the Alamo.

Despite the defenders’ valiant battle, Santa Anna’s troops stormed the Alamo on the morning of March 6, 1836 killing every single one of the Texas defenders including William Travis, Jim Bowie and Davy Crockett. Though victorious, the cost to Mexican forces was enormous, as 1,600 Mexican soldiers lay dead. An aide to Santa Anna would later privately note: “One more such glorious victory and we are finished.”

To reinforce the victory, several non-combatants were spared so that they might inform their fellow Texans of their potential fate should they continue to thwart the Mexican authorities. Afterwards, the bodies of the Alamo defenders were looted, dismembered, buried in mass graves, dumped into the river, or burned.

Today, the Alamo is one of the best known monuments in the United States. In addition, it’s remaining buildings, as well as the surrounding area, is one of the most haunted places in the nation. With its long history and the many deaths that have occurred at the site, tales of apparitions at the old mission have been reported for almost two centuries.

Before the Battle of the Alamo, the ground that takes up most of what is the Alamo Plaza today was utilized as a cemetery between the years of 1724 and 1793. It is estimated that about a thousand people were buried here during those years. In addition to those pre-Alamo bodies, most of the men fighting on both sides of the battle were also buried in the area. Even today, construction and utility workers often turn up skulls and other bones when excavating in the area.

The first reported sighting of ghostly activity happened only weeks after the Battle of the Alamo. When Santa Anna left San Antonio, he moved about 1,500 of his troops to San Jacinto (near today’s Houston) leaving about 1,000 men at San Antonio to control the rebels. However, Santa Anna was captured at San Jacinto by Sam Houston and his Texican Freedom Fighters in April, 1836. In retaliation, Santa Anna sent messengers to order the total destruction of the Alamo.

However, his wish would not come true, as when the Mexican troops neared the church with flaming torches, six fully formed spirits suddenly appeared before the front doors of the mission, waving blazing sabers and yelling, “Do not touch the Alamo, do not touch these walls!”  The Mexicans fled in fear and would not be persuaded to return regardless of threats made by their superiors.  Some say these entities were Alamo defenders while others say they were monks protecting the mission.

When Colonel Sanchez, who was tasked with leading the destruction of the mission, reported back to General Andrade, he recounted the tale of six Diablos (devils) coming out of the front doors. The general only scoffed, thinking the story ludicrous. However, not one of the men of the first task force would return to the Alamo.Frustrated, but undaunted, the general then gathered another group of men and returned to the Alamo, determined to burn the Long House Barracks. However, again, the building was saved from destruction when a tall male spirit arose from the roof of the building. The entity, standing above the Mexican soldiers, was said to have held two flaming balls of fire in its outstretched hands. At the sight of abnormality, the soldiers fell to their knees and covered their eyes. Fleeing once again, the Mexicans refused to return and for the next ten years, the Alamo lay in ruins.

Erected in 1939, the Alamo Monument, called the Cenotaph, depicts this spirit upon its face, along with the defenders of the fortress. Legend has it that when the ethereal energy was released from the flames where the Alamo defenders bodies were burned, the spirit utilized the energy to make itself visible to frighten away the would-be destructionists.

In 1846, following Texas ‘ annexation into the United States, the U.S. Army began to occupy the complex, making significant repairs to the church and the old barracks.

By the late 19th century, the tales of ghostly happenings at the Alamo were well known in the area. However, this did not stop the City of San Antonio in its move to utilize the old mission as a police headquarters, and the old barracks, as a jail. Within no time, prisoners housed in the  barracks started to complain of paranormal activities.

Between the years of 1894 and 1897, a number of articles appeared in the San Antonio Express News describing ghostly sentries that paced along the roof of the police station, shadows and moaning sounds heard by the staff and prisoners, and other ghostly phenomena. Guards and watchmen began to refuse to patrol the building after hours. This, of course caused an uproar among the politicians and a short time later the prisoners were moved to another location.