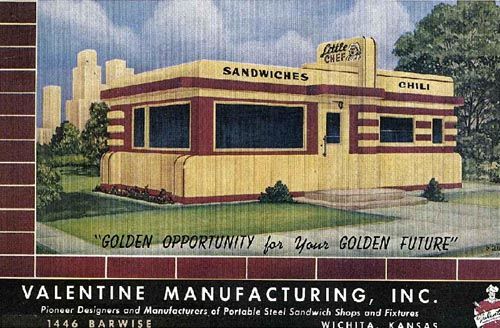 Before the days when busy streets were lined with the fast-food chains of McDonald’s, Wendy’s, Burger King, and Taco Bell, there were literally hundreds of all American Mom and Pop Diners. One of the most popular varieties of these old-time diners was the Valentine Diner.

Webster’s Dictionary defines a diner as “a restaurant in the shape of a railroad car.” In the case of Valentine Diners, as well as many others, this was true as the manufacturing design reflected the style of railroad dining cars.

The lunch wagon, the predecessor to the diner was invented in 1872 by Walter Scott who later became a commercial manufacturer of lunch wagons in 1887. The lunch wagon idea caught on so quickly that many towns passed ordinances to restrict their hours of operation. As a result, many operators looked for a more permanent solution turning old railroad cars and obsolete horse-drawn streetcars into diners. New manufacturers of these cars also cropped up at an amazing pace. These new and innovative “dining cars” were constructed with indoor bathrooms, tables, and repositioned counters to accommodate a larger food selection.

During the early days, most of the dining car manufacturers were located on the east coast, producing shiny stainless steel structures. Because of their distant location, diners didn’t catch on in the west for many years. However that all changed with Arthur Valentine came to Kansas in 1914. A natural salesman, he first started selling cars in Great Bend, then sometime around 1930, he and his wife, Ella, opened a restaurant in the small south-central town of Hazelton, Kansas. 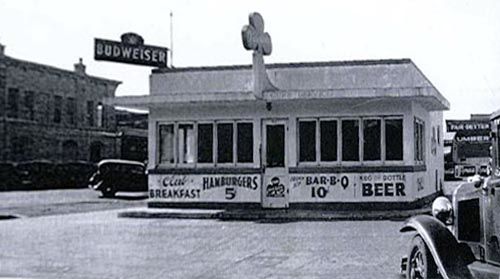 The Shamrock diner in Hutchinson, Kansas, was one of the first Valentine Diners, courtesy Kansas State Historical Society.

Enjoying their successful business, they soon expanded to include two more restaurants in Wichita and Hutchinson, Kansas. These restaurants were the predecessor of what would become known as the Valentine Lunch System. These original small diners operated in buildings that Valentine had either purchased or leased. At the same time, a company called Ablah Hotel Supply was making prefabricated lunchroom buildings, and around 1932, they made one for Arthur Valentine. Valentine was so impressed that he began working for Ablah, becoming a salesman for their buildings.

Eventually, Valentine owned and operated as many as 50 of these lunchrooms. However, by the end of the decade, Ablah discontinued the manufacture of pre-fab building and allowed Valentine to take on that part of the business.

In 1938, Valentine arranged with the Hayes Equipment Manufacturing Company to build his sandwich shops, but the arrangement was short-lived when material shortages created by World War II shut the operation down. Frustrated, Valentine became a Boeing inspector during the war, but shortly after it was over, he recreated the business, calling it Valentine Industries.

Valentine continually tinkered with new ideas to achieve business success. In addition to selling his diners fully equipped, it could also be bought gutted with only a few shelves for other purposes such as liquor stores and barbershops. 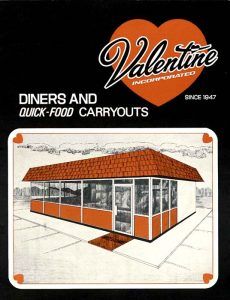 But, his true success was the Valentine Lunch System. These eight-to-ten-seat diners could be operated by just one or two people. The little square-sided structures were designed to be easily moved on a flatbed railroad car. Inside, stools were placed around a counter. Some designs had pick-up windows. The catalogs reinforced the idea that an individual purchasing one of these diners could make a substantial living and that they could add additional units if they desired. Ordering the diner through a catalog, the struggling entrepreneur could buy the boxy little diner for just $5,000 with monthly installment payments of $40.00. Arriving complete with grill, counter, and stools, the operation could be unloaded, set upon a concrete slab, and be operational within hours.

In an industry where nearly all major diner manufacturers were on the East Coast, Valentine soon became very successful as the diners were shipped all across the country, particularly to small towns, where they were sometimes the only restaurant available.

Sadly, Arthur’s health began to fail in 1951, just as Valentine Diners were becoming extremely successful. His involvement in the company thereafter diminished until his death in 1954. The business was sold to the Radcliff family in 1957 and continued to operate until August 1968.

Thankfully, the American diner has seen a resurgence in popularity in the last several years. For those of us who would prefer a pleasant smile and a great grilled burger, to the manufacturing-like mentality of many of the fast-food places, this is a great relief.

Many of these small diners continue to exist today all over the country. Here is a list of those we’ve found on Route 66:

Twin Arrows, Arizona – Located between Winslow and Flagstaff, Arizona on I-40 is the old Twin Arrows Trading Post and Cafe. Located at exit 219, this was a long-lasting Route 66 icon. Sadly, it is closed and vandalized today. 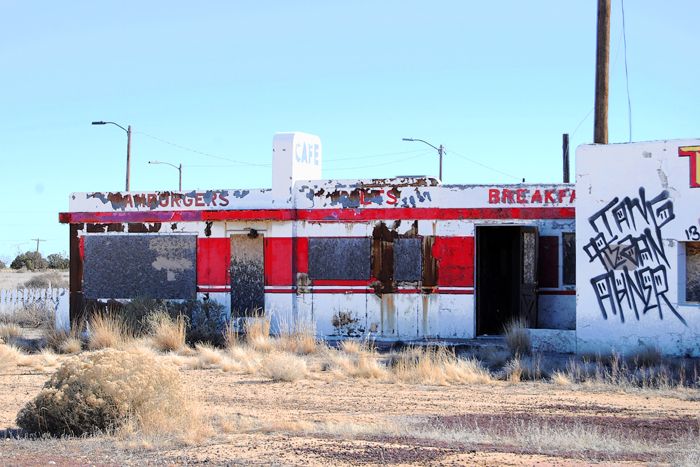 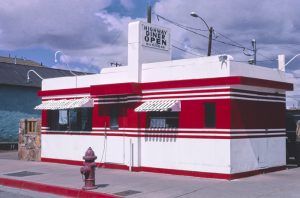 The Highway Diner on Route 66 in Winslow, Arizona by John Margolies, 2003. 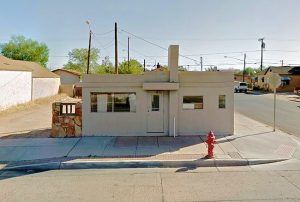 The old Highway Diner on route 66 in Winslow, Arizona has been repainted and appears to serve as a business building today. Photo courtesy Google Maps.

Winslow, Arizona – This old Valentine Diner, located at 320 East Second Street, has been called the Highway Diner, Monday’s Cafe and Irene’s in the past. The 9-stool diner probably opened about 1946 after it was ordered by Mayor J. Lester Allen. It also has been called Monday’s Cafe and Irene’s. The building received a grant for its restoration in 2008. However, today, it has been entirely repainted and appears to be some sort of business building. 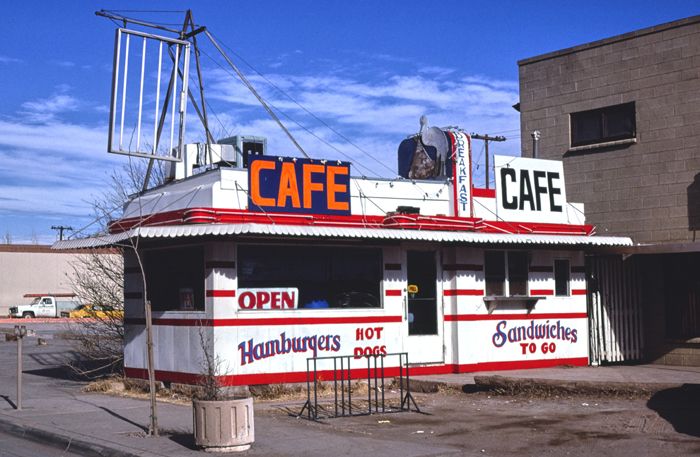 The Stork Cafe was an original Valentine’s Diner in Winslow, Arizona. Photo by John Margolies, 1979.

Winslow, Arizona – This 9-stool Valentine Diner was once located at 114 East Third Street in Winslow, Arizona. It was originally owned by Cecil McCormick and opened as the Birthplace Diner in about 1950. Through the years, it was called the Pit Diner, One Spot Grill, the Stork Cafe, and the Santa Fe Diner. Reports suggest that it was sold and moved to Oregon. By John Margolies, 1979. 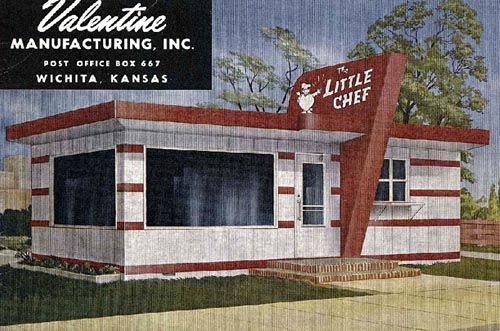 Chandler, Oklahoma – Located at Seventh and Manvel Streets this diner was originally located in Leedy, Oklahoma. Patina Properties purchased in 2003 and moved it to Chandler. The company had plans to restore the 1958 “Little Chef” model 10-stool diner is currently but that never happened. In 2018, it was sold again and moved to Guthrie, Oklahoma, where once again, plans are being made to restore it. 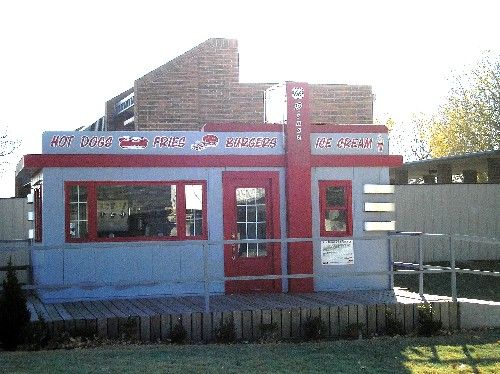 Clinton, Oklahoma – The Route 66 Diner is part of the Route 66 Museum complex located at 2229 West Gary Boulevard. Originally opened in 1956 in Shamrock, Texas , the owners M.L. and Alta Porter ran the cafe until 1964.  The museum acquired it in 2002, restored it, and placed it on the museum grounds at Clinton. 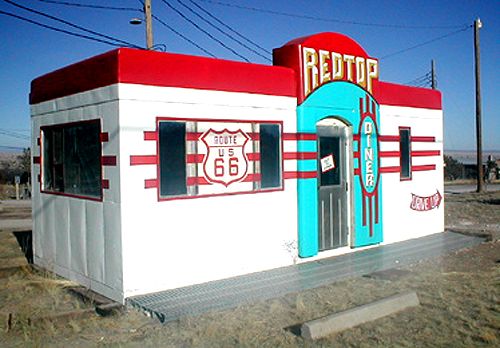 Edgewood, New Mexico – This old Valentine Diner once stood in Magdalena, New Mexico before it was purchased by Jerry Ueckert and moved to Edgewood. The diner had extensive damage and Jerry is currently in the process of restoring it. It is located on Route 66. 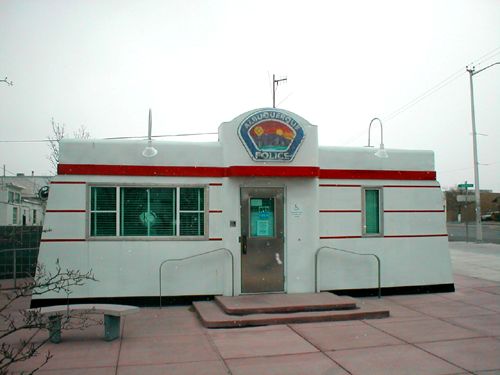 Compiled and edited by Kathy Weiser/Legends of America, updated August 2020.