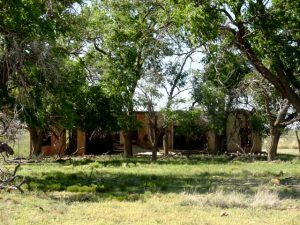 Five miles past Glenrio on old Route 66 is the ghost town of Endee, New Mexico, which had a population of 110 in 1946. You can also view several abandoned homes and structures before arriving at Endee.

Endee was founded in 1882, gaining its name from the old ND ranch. A post office was established in 1886. Endee was originally a wild west town where cowpunchers went to blow off steam on Saturday nights. Some claim that the town was so rough that a trench was dug on Saturday to bury the gunfight losers on Sunday. In 1950, 187 people made their homes in Endee, but this town has long been abandoned and forgotten.

The post office in Endee opened in 1886. The settlement was founded as a supply center for area ranches, including the sprawling ND Ranch established by John and George Day in 1882. The post office closed in 1955, three years after completing a realignment of Route 66 that bypassed the community.

As a result of its remote location, Endee retained vestiges of the frontier era well into the early 20th century. The Santa Fe New Mexican, on May 2, 1906, reported that with the arrest of John Fife and Tom Darlington in Endee by mounted police, a significant cattle-rustling had been “broken up.” The Evening Observer on June 30, 1909, reported, “The anti-saloon campaign at Endee, N.M. came to a close last night when a band of masked men, mounted and armed, rode their horses through the doors of a saloon and shot up the place until the mirrors and glassware were destroyed.” 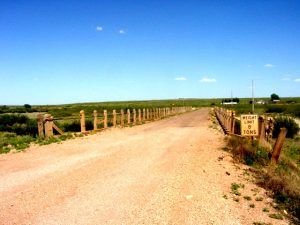 Continuing down this old dirt road to Bard, you will see the remains of an old Rock Island trestle. The settlement of Bard was also said to have been a wild town during the cowboy days, when drunkenness and shootouts were commonplace.

In the 1940s, it was a trading center for local ranchers, consisting of a store, a gas station, and several houses. Bard had 195 people at one time, but by 1980 the town had been reduced to ten. Today, Bard is also one more casualty of Route 66.

Continuing west on old Route 66, the dirt and gravel road will take you to San Jon if road conditions permit.

The initial settlement in Bard dates to 1906, and the population became sufficient to warrant a post office in 1908. The following year, acceptance of an amended post office application changed the name to Bard City, and another amendment in 1913 changed it back to Bard.

Numerous sources claim the name comes from a pioneering family’s association with a railroad siding named Bard in Texas. However, the most probable namesake is the Bar-D Ranch operating in the area at the town’s establishment. 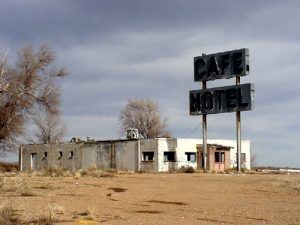 This old Motel and Cafe sits along I-40 at the Bard, New Mexico exit.

On three occasions, the entire town relocated to capitalize on the change in traffic patterns from predominate railroad to automotive. A 1946 highway guide indicates a population of 26 and a sparse business district consisting of a gas station, garage, and post office. Today Bard is a ghost town.

Russell’s Truck Stop opened near the site in late 2009. The unique complex blends the modern, all-purpose travel center with an automotive museum and Route 66 gift shop. However, the address of the travel center indicates it is Endee. 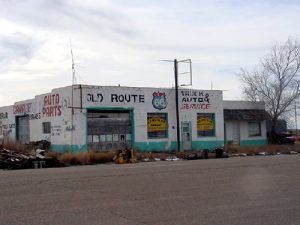 Another few miles along your journey, you’ll come to San Jon (pronounced San Hone), a small agricultural community curled up against the vast open spaces of Eastern New Mexico. This quiet village of just about 300 people is not quite a ghost town, but many old businesses display otherwise. However, this was once a busy stop for early-day Route 66 travelers with gas stations, garages, motor courts, and restaurants.

The settlement was founded in 1902 and soon became an important ranching and shipping center when the railroad arrived two years later. 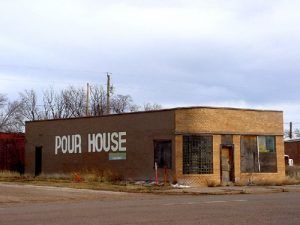 San Jon was the largest town on those eastern plains and was the hub of cowboy nightlife on Saturday nights in those vintage days. Unfortunately, its streets are quiet today, after being passed by the interstate, lined with empty buildings testifying to better times.

Continuing for a little more than twenty miles, you will soon arrive in Tucumcari. As you travel, watch for the many “Tucumcari Tonite” billboards, which have been popular since the vintage days of Route 66.