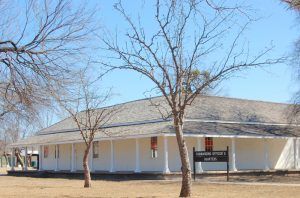 Fort Duncan was a United States Army base, established in 1749 in present-day Eagle Pass, Texas to protect settlement on the Rio Grande.

Prior to the establishment of Fort Duncan, a temporary post called Camp Eagle Pass was located at the site at the start of the Mexican-American War in 1846. Because of its strategic location at Eagle Pass, on the east bank of the Rio Grande, a permanent post was established in March 1849. Called Fort Duncan in honor of James Duncan, a Mexican-American War hero, the post was established by Captain Sidney Burbank and three infantry companies. Like Fort McIntosh and other posts along the river, it guarded the international boundary, scrutinized the traders crossing it, and protected settlers and emigrants.

The post consisted of a storehouse, two magazines, four officers’ quarters, and a stone hospital, in addition to quarters for enlisted men. The fort was significant because of the trade crossing into Mexico at Eagle Pass, its location on the California Road, and its position for scouting against Indians in the 1850s. 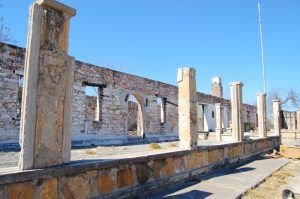 Ruins of the Infantry Barracks at Fort Duncan, Texas by Kathy Weiser-Alexander.

Shortly after the establishment of Fort Duncan, caravans prospectors on their way to the California gold fields via the Mexico route, traveled through the area, crossing the Rio Grande at Eagle Pass. Within no time, a bustling settlement was established near the fort and was first called “California Camp.” In 1850, an official town was formed and the name changed to Eagle Pass.

The fort was involved in the Callahan expedition of 1855 when James H. Callahan led an effort to repel attacks of Lipan Apache Indians and to capture runaway slaves. However, when Callahan seized and burned the Mexican town of Piedras Negras, the fort commanders refused to help him re-cross the Rio Grande into the United States. 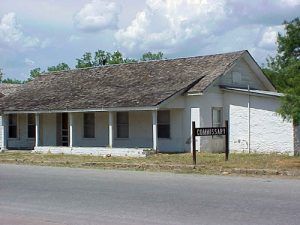 In May 1859, the fort was abandoned and the troops transferred to Camp Verde. However, when a number of disturbances caused by Juan N. Cortina on the Rio Grande occurred, the fort was re-garrisoned in March 1860. when the Civil War broke out, the fort was abandoned again when federal troops left in March 1861. It was then occupied by Confederates troops and was known as Rio Grande Station. As such, it served the Frontier Regiment and was an important customs point for Confederate cotton and munitions trade with Mexico. The post was reoccupied by Federal troops in March 1868.

In 1870 a number of Seminole Indians were working at the fort as guides and scouts. In 1883, the fort was once again abandoned because the site upon which it was located, was leased and the owner wouldn’t sell.

However, it continued to serve as a sub-post of Fort Clark and was renamed Camp at Eagle Pass. In 1894, the government was finally able to purchase the land and reinstated Fort Duncan. For the next 12 years, the fort operated only with a small number of troops, primarily focused on quelling disturbances along the river. However, during World War I, the number of troops was increased to 16,000 in 1916. By 1920, the number had once again dramatically reduced.

By 1933, the fort had again been closed and though the U.S. Government still owned the land, the City of Eagle Pass was allowed to develop and maintain the old post as a public park, on the condition that the government could reclaim the post for military or other reasons at any time. However, just two years later, the property was given over to the city. 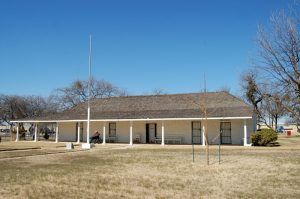 Now called Fort Duncan Park, the site was listed in the National Register of Historic Places in 1971. The site contains a dozen buildings, including a stone magazine, stone stables, and adobe officers’ quarters. The old headquarters building now serves as a museum.