Fort McIntosh was founded on the banks of the Rio Grande at Laredo in 1849, right after the Mexican American War, it policed the international boundary and defended settlers from hostile Apache and Comanche Indians. Originally, it was named Camp Crawford, but renamed Fort McIntosh in 1850 in honor of Lieutenant Colonel James Simmons McIntosh, a Mexican-American War hero.

Federal troops abandoned the fort at the outbreak of the Civil War and it was soon taken over by Confederates. The Battle of Laredo took place near the fort on March 19, 1864, when 72 men repelled three attacks from a force of 200 Federal soldiers.

On October 23, 1865, the post was reoccupied by federal troops of the 2nd Texas Cavalry, who relocated the fort ½ mile down the river and erected a more conventional frontier post. In the late 19th century, Several African American units among them the Tenth Cavalry, known as “Buffalo Soldiers.” were stationed at Fort McIntosh.

During World War I, the fort was used as a training base and continued in service through World War II.  The fort was deactivated in 1946, and the land is now part of the campus of Laredo Community College. The Laredo United States Army Reserve 340th Quarter Master Company is located within the fort. 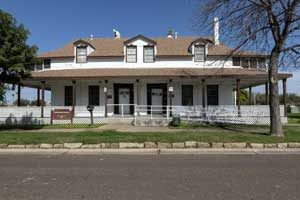 The fort’s complex of stone, brick, and frame buildings, are still used today. The newer buildings and the parade grounds are near the entrance. Brick and frame officers’ quarters line two sides of the parade ground, and two-story brick barracks a third. The older buildings are north of the parade ground. The guardhouse is now a warehouse, and the U.S. Border Patrol occupies the headquarters building. All that remains of the first fort, in the northwestern corner of the Fort McIntosh Reservation, are mounds of earth.

The site is located about 15 blocks west of downtown Laredo, via Victoria Street.