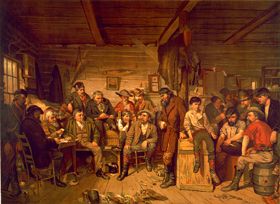 This group achieved much success in apprehending horse thieves and soon expanded into stopping other illegal activities. By 1863, the Missouri groups gathered to form the National Order of the A.H.T.A., drawing up formal bylaws and adopting a constitution.

By the end of the Civil War, thieves and robbers were so prevalent in Missouri and surrounding states that other places saw the benefit of these organized groups. Before long, there were branches throughout Missouri, Illinois, Kansas, Oklahoma.

During this lawless period, numerous gangs of outlaws made their hideaways in the inadequately policed Indian Territory, preying on the livestock of neighboring states. The A.H.T.A. groups succeeded in apprehending offenders over a wide area that they soon diversified into apprehending other types of criminals while still retaining their original name. Before long, courts recognized the organization’s value, nodding its head in approval, while honest citizens and ministers praised the group for its justice and honesty.

In 1906, spokesmen for the organization stated:

“The A.H.T.A. uses only strictly honorable, legal methods. It opposes lawlessness in any and all forms yet does its work so systematically and efficiently that few criminals are able to escape when it takes the trail. The centralization of ‘Many in One’ has many advantages not possessed by even an independent association, for while it might encompass a neighborhood, the A.T.H.A. covers many states. The value of an article stolen is rarely taken into consideration. The order decrees that the laws of the land must be obeyed, though it costs many times the value of the property to capture the thief. An individual could not spend $50 to $100 to recover a $25 horse and capture the thief. The A.T.H.A. would, because of the effect it would have in the future. Thieves have learned these facts and do less stealing from our members, hence the preventative protection.”

By this time, the national organization numbered over 30,000 members, with multiple divisions that defined areas of “jurisdiction,” including:

Illinois Jurisdiction – Governing the states of Illinois, Michigan, Indiana, and all the territory south of the Ohio and east of the Mississippi rivers not otherwise districted.

Oklahoma Jurisdiction – Governing the states of Oklahoma, Texas, and all of the Indian Territory south of the south line of the Cherokee nation.

Of the Association, Frank W. Blackmar, in writing Kansas: A Cyclopedia of State History in 1912, would say:

“The Anti Horse Thief Association is in no sense a vigilance committee, and the organization has never found it necessary to adopt the mysterious methods of ‘Regulators,’ ‘White Caps’ or kindred organizations. Its deeds are done in the broad open light of the day. When a theft or robbery is committed in any portion of the vast territory covered by the association and the direction taken by the offender is ascertained, local associations are notified to be on the lookout for the fugitive, and his capture is almost a certainty. Although the original name is retained, bankers, merchants, and manufacturers are to be found among the members, courts recognize its value, criminals fear it, and press and pulpit have endorsed and praised its work in the apprehension of criminals.”

Once the outlaw days of the lawless west had finally come to an end, the organization remained, becoming a fraternal organization and even including a Lady’s Auxillary, eventually having groups in 16 states. Somewhere along the line, the name was changed to the Anti-Thief Association (A.T.A.) and still exists today. Some groups, however, still use the name A.H.T.A.

Vigilantes in the Old West