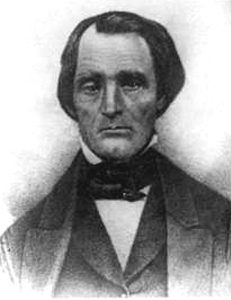 Born of royal Scottish decent on May 23, 1804, Alexander MacGregor started life on his parent’s farm in Wilson Junction, New York.  He wouldn’t leave the farm until he was 28, and like many others, sought adventure in the West. In 1832 he landed in Chicago, a small village at the time, that had grown around Fort Dearborn.

It was here that he would partner with some close friends to form “Land Company No. 1”, which according to the City of McGregor, bought a large tract of land from the government in the Chicago area and divided it into lots for speculation. It is noted that there is no mention of this company or Alexander MacGregor in the historical records of Chicago or Cook County.

Although his business was successful, the urge to push west was too much, and in 1834 he moved on to what is now Aurora, Illinois, which at the time was newly opened government lands.  Here he claimed around 2,400 acres of timberland, which he improved then quickly sold in 160-acre tracts. So quickly in fact that by 1835 he was heading west again, this time to the French settlement of Prairie du Chien, near the confluence of the Wisconsin and Mississippi River. This time he would become active in the affairs of the growing community and stay.

In 1836 Alexander MacGregor helped prepare a boat for crossing the Mississippi River from Fort Crawford, adjacent to Prairie du Chien, and realized the need in a ferry.  With help from a couple of business associates, Thomas Burnett and James Lockwood, MacGregor bought part of a Spanish claim, calling it first “The Ferry Property”. The area of the Spanish Claim had first been found by Europeans in June of 1673 by French Jesuit missionary Father Marquette and trader Louis Joliet.  In 1800, the “Giard Tract” land grant was given to Basil Giard, which was one of three Spanish land grants in what is now Iowa. All of Giard’s heirs had deeded their shares to businessmen Lockwood and Burnett by 1837. Working with Burnett, Alexander purchased additional claim land to protect the ferry from competition.

While MacGregor still lived on the Wisconsin side of the river, the first ferryman, James King, settled on the Iowa side in 1841 and had charge of the first ferry. When King died in 1872, one obituary said of him:

“McGregor’s oldest citizen and first white occupant of the ground on which the city was built… He was a quiet, much-esteemed citizen and a favorite pioneer”.

In 1843, Alexander MacGregor married Ann Gardner, and four years later the couple moved across the river from Prairie du Chien to the quickly growing settlement where they would have four sons, two of which died as infants.

That same year, 1847, the settlement was then known as MacGregor’s Landing and became a bustling river community. Ten years later, in 1857, it was officially incorporated as the town of McGregor and quickly grew into a major commercial center. Also in 1857,  the Milwaukee & Mississippi Railroad established a line to Prairie du Chien, connecting Lake Michigan to the mighty river by rail. Other railroads were built from McGregor west, with North McGregor (now Marquette) acting as the rail terminus. When reaching McGregor from the west, trains were taken apart, ferried across the river, then put back together to make their way to Lake Michigan.

Alexander MacGregor would die at the age of 54 in December of 1858, but his wife Ann would continue to live in the community until her death in 1890. 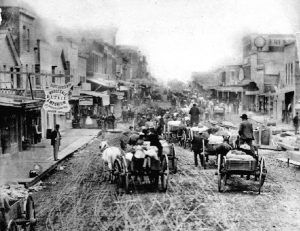 During the city’s peak, the population exploded to over 5,500 and was the busiest shipping port west of Chicago during the 1870s. The city boasted 120 businesses, 20 of which were associated with the shipping of grain and goods. Everything needed was there for settlers or those just passing through on their way to the western frontier.

Steamboat traffic was also important to the early life of McGregor.  Over 400,000 bushels of wheat, barley, oats, and corn were shipped out of the city on the Mississippi River between 1871 and 1872.  During that same time, city scales weighed 20,000 hogs, producing five million pounds of pork.

Soon after, improved highway transportation and the railroad forced a slowdown in the need for steamboats, then in 1874, Prairie Du Chien businessman John Lawler commissioned the construction of a permanent pontoon bridge to connect the two cities by rail, eliminating the need to disassemble the trains, and thus many of the jobs, resulting in a decline of the city’s population. That same year, North McGregor was incorporated, which was later renamed Marquette in 1920. 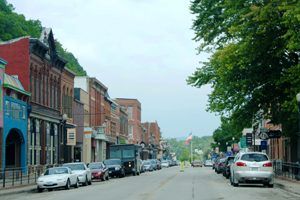 Three ferries carried goods and passengers across the Mississippi, named the Wanamingo, Lorese and Rob Roy.  Each boat making up to eight trips daily.  Those ferries that played such an important role in the town’s history were replaced with a suspension bridge in 1932, which was officially closed and dismantled in the mid-1970s. It was replaced with the Marquette-Joliet Memorial Bridge in 1974.

Today, McGregor and Marquette have kept their historic charm, but the city has a population of less than a thousand. The nationally registered historic downtown district still contains many of the buildings constructed during its boom years, and as a river town on the Mississippi, McGregor has become a popular tourist destination, known for its nearby Native American  “Effigy Mounds”, Pike’s Peak State Park, and the Driftless Area, a region noted for its many deeply carved river valleys. McGregor is an artists’ community worth visiting for not only the historical value but its live local music and fine dining as well. 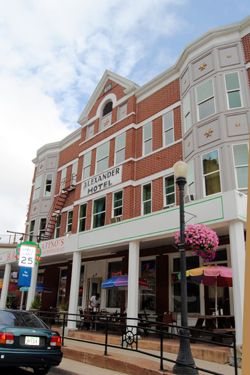 Originally the Lewis Hotel, the Alexander Hotel was built in 1899. Photo by Kathy Weiser-Alexander.