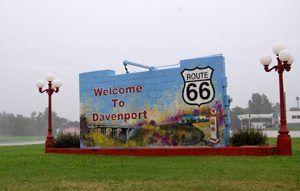 Just about seven miles southwest of Stroud, Oklahoma, travelers along old Route 66 will come to the small town of Davenport, first settled in the second great land run of 1891.

Lincoln County, which included the future Davenport townsite, was opened to non-Indian settlers during the Sac and Fox Opening on September 22, 1891. That same year, the community had a stagecoach stop. Some of the very first settlers were Noah and Annie Sutton Davenport. Their daughter, Nettie, became the first postmistress of the post office, which was established on March 29, 1892, and the town was named for the family.

During the 1890s a number of businesses would be established in the community, including several cotton gins, a grist mill, a sawmill, a blacksmith shop, and a general store. In 1898, the St. Louis and Oklahoma City Railroad (later the St. Louis and San Francisco Railway) connected the agricultural trade center with outside markets.

In 1900, a man named Cleason Robertson laid out 40 acres of his homestead for a townsite and filed a plat. However, just a year later, the Eastern Oklahoma Railway (later the Atchison, Topeka, and Santa Fe Railroad) surveyed for a line that would intersect the St. Louis and Oklahoma City Railroad, and the town actually developed at this site.

In 1903, a colony of “home seekers,” headed by a group of Methodist ministers in Kentucky, formed a corporation called the “Kentucky, Oklahoma, Indian Territory and Adjacent States Land and Townsite Co.” Selling stock throughout Kentucky, the company promoted Davenport as a place where Methodist ministers could purchase lots or acreage surrounding the town and retire. Though they were successful in promoting Davenport to Methodist ministers, they also attracted other investors who were not connected with the Methodist church, and the mission of the group changed to the central theme of promoting Davenport. The Townsite company sold 300 lots and a bank and a hotel went up.

The town began to grow and the first newspaper, the Davenport Leader, was published by W. H. Bonner on May 5, 1904. The small town was incorporated in 1906. The following year, when Oklahoma became a state, Davenport boasted 512 people. At that time, Davenport boasted two blocks of brick buildings along Broadway Street. At this point, it had two banks, two cotton gins, two lumber companies, seven general/dry goods stores, four churches, a newspaper, and a telephone exchange.

In June 1910, the Davenport newspaper, then called The New Era, reported on Davenport’s success:

“Davenport is situated in a thickly settled community and is surrounded by the richest farming land in Oklahoma, which is adapted to the raising of wheat, oats, corn, kafir corn, milo maize, cotton, potatoes, alfalfa and all other kinds of grasses. All kinds of fruit and vegetables do well here. Fine soft water at from 20 to 50 feet. Davenport is within the oil and gas district and is surrounded by extensive deposits of the finest brick and tile shale. One brick plant of a large capacity is now being erected and capitalists are contemplating the installation of several more.

Davenport has an abundance of natural gas for heating, lighting and all factory purposes as the main pipeline of natural gas, from Tulsa to Oklahoma City and Shawnee passes through the townsite. With such advantages, Davenport should be and is bound to be the best manufacturing town in the state. 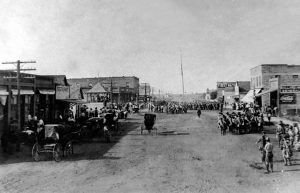 In 1911, the Davenport Brick and Tile Company constructed a plant just south of town, along the Santa Fe Tracks. From this plant would come the one-mile stretch of brick-paved streets in Davenport. Today, some six blocks of these old streets are still utilized and are on the National Register of Historic Places. At about the same time, Davenport’s town leaders began to campaign for the routing of a branch of the Ozark Trail Highway through the city. Successful in their efforts, the Ozark Trail was designated in 1916. During the next decade, Davenport,  Stroud, and Chandler merchants would benefit from the publicity surrounding the continuing development of the Ozark Trail. In 1924, the trail became State Highway 7 and just two years later, the highway became Route 66 in 1926.

During these years, one of the most important businesses was the Davenport Canning Factory, which employed two shifts of approximately 30 employees. Local farmers sold produce such as tomatoes, sweet potatoes, corn, peas, apples, and peaches to the factory. In 1924, Davenport saw another rush when oil was discovered but, it still continued to be a quiet community. The oil boom caused a dramatic increase in the population from 440 in 1920 to a high of 1,072 in 1930.

Today this small Route 66 city boasts about 800 people. The largest local employer in Davenport is Central Oklahoma Telephone Co., an independent telecommunications firm that is headquartered in Davenport and serves seven other towns in the area with phone and Internet services. Many local residents commute daily to jobs in Oklahoma City and Tulsa.

There are several historic sites to be seen in and around Davenport. The Jessamine Hotel on Broadway is constructed of concrete blocks that were made by the Davenport Concrete Block Factory in 1906-07 to simulate rough-cut stone. The Tipton home on the east edge of town was built in the late 1920s and is symbolic of the oil boom days. There are two large murals on two historic downtown buildings that depict nine scenes reproduced by professional artists from actual photos from the early days. The 1891 Land Run scene from Harper’s Weekly is the tallest mural on  Route 66, soaring 32 feet high on the south side of the 1905 Farmers Bank Building. Other scenes are of Nettie Davenport, first postmaster and namesake of the town, her log cabin post office, oil boom scenes, cotton fields, and business views.

Davenport Broadway Brick Street comprises six blocks of brick roadway. Created in 1926 of varied colored bricks, the original brick paving extended a mile in length. Old photos are on display in City Hall, as well as an original painting by Nettie Davenport, and Central Oklahoma Telephone Co., the local independent phone provider in business here since 1904, has its original switchboard and old phones on display. On the Route 66 curve in Davenport, one of the few original wooden frame “cottage style” filling stations built by Magnolia (later Mobil) Oil Co. in about 1929 sits at 8th and Broadway and the restored 1933 Texaco filling station can be seen at 7th and Broadway. The Davenport Cemetery on Route 66, contains one of the best examples of the Works Progress Administration (WPA) — a beautiful native stone chapel.

While in this quaint little town, grab a bite to eat at Dan’s Bar-b-que or Gar Wooly’s 66 Café. 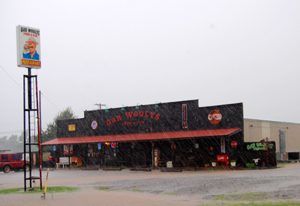