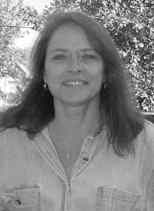 That’s my wife Kathy back in early 2004. Although, at the time, she wasn’t my wife yet, as I was still in the process of convincing her she needed me. Still working on that one, although I think I have her hooked for now.

I met Kathy in February of 2003 when both of us were still in the “corporate world”. Kathy had this little website hobby going on the side called “High Country Legends“. It was a Yahoo hosted site she created sometime in 2002, dedicated to the Moreno Valley area of New Mexico. Her real intention was to write a book about the Moreno Valley, but someone beat her to the punch. She loved the history of that area though, as she spent every summer there with her grandparents in an old miner’s cabin in Idlewild.

Some long time friends of hers, who were in the publishing world, told her she should create a website instead. So, without knowing a lick about web design, nor what an IP address even was (probably thought you needed an outhouse if you asked her about it), Kathy jumped in with both feet and started writing about the history of the places she had visited as a child in the Moreno Valley. She quickly discovered, however, that with each story there was another connection to the subject outside the valley, and low and behold, she found herself in a quandary; to keep High Country Legends, or start a new website that represented her ambitious writings beyond New Mexico.

We were sitting at my kitchen table one Friday night when Kathy told me about her problem. It was obvious that with the expansion of stories, High Country Legends wasn’t going to cut it as a name. I probably wasn’t much help in our conversation. I think I had suggested something like “Rocky Mountain Adventures” to go along with another of her already established side hobbies, the Rocky Mountain General Store (now Legends’ General Store), which at the time, was just a few items set up in an Antique Mall. I might have also mentioned “Old Timer Tales”, or “American History Treasures”, and probably threw in “Dusty Roads” to try to get a chuckle. Thank goodness she wasn’t listening to me, as she really just needed to talk it out with herself. You know how that goes, someone asks you for advice, but, really, they are just talking out loud to figure it out themselves.

“What about Legends Of America?”, Kathy quipped as if effortlessly spewing out the name. “Hmmm… sounds pretty ambitious for someone traveling every week in a real job”, I said with a hint of reality check intended. Creative minds like Kathy’s don’t listen to left-brained people like me though, and I don’t even think she acknowledged my pessimism as she went straight for her laptop to see if the name was taken. Sure enough, the domain name was available, and a few clicks later, on Friday, June 27, 2003, Kathy became the proud owner of LegendsOfAmerica.com.

Over the next year and a half, while Kathy was realizing I wasn’t going away, I was realizing Kathy was going everywhere with her new hobby. So when, in the fall of 2004, Kathy came to a crossroads in life that had her leaving her corporate job, and contemplating moving, I quickly jumped at the chance to selfishly keep her close by. “Move in with me, keep on writing and let me help support your business. Sooner or later you’re gonna be my Sugar Mamma!” She actually listened to me this time, and since then, her new full-time job as Owner/Editor of Legends of America has been a wild ride of fun, adventure, and learning. One we both wouldn’t trade for anything else in the world. 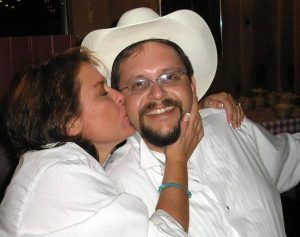 Kathy and Dave on their wedding night at the Laguna Vista Saloon in Eagle Nest, NM. June 19, 2006.

Web sites come and go, but, we have been fortunate enough to keep growing, thanks to you, our readers. Legends also had some help along the way. Yahoo named Legends of America their “Pick of the Day” back in August 2004, when Yahoo had such a thing. The Scout Report featured Legends in September that same year, and Worldstart named Legends “Cool Site of the Day” in January of 2005. These, along with other recognitions, helped get the word out, and, during Legend’s slow but steady growth, Kathy actually became my Sugar Mamma, getting me out of my corporate rat race in 2009. I’m thankful she didn’t pay attention to my early pessimism back in 2003 and did what she does best, follow her heart and her love of history. A love we both have and are proud to share with you.

In the last decade, over 51 Million of you have visited our website, viewing our pages over 126 million times. Each and every time you do, you are supporting our efforts to share American History with the masses. For that, we can’t even begin to thank you enough. We sincerely look forward to serving you in what we hope is another “Roaring 20’s” in America.