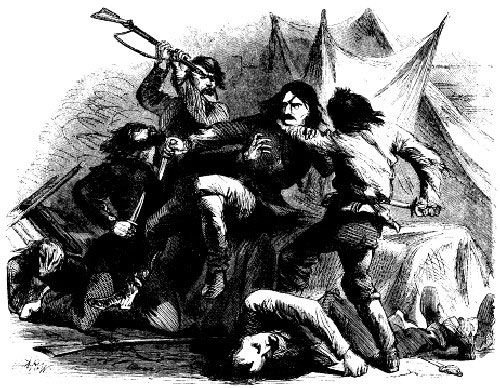 For a long time now many people have been very much interested in getting the straight of this famous mix-up of the long ago, which occurred at the old David McCanles home just southeast of what is now Fairbury, Nebraska on July 11 [sic], 1861. [editor note: the incident actually occurred on July 12]

We, like others, were interested too and for some time have been gathering every account we could get, talked to people whose fathers and mothers lived there at the time, visited the scene of the conflict several times, and read old history. But for all that, the absolute certainty of the facts are lacking and our honest opinion is that the real facts never will be known.

The last living witness of the affair, William Monroe McCanles, a son of the one killed, was then 12 years of age (He, too, has just passed on). Just a few years ago, he first brought out the story as he told it. In our opinion, his waiting until all those who knew the facts and the character of these two men had passed on, has hurt his story we believe.

The ones who take the other side are all honest upright people. They get their story from their fathers and mothers who knew both McCanles and Wild Bill Hickok.

The sons and daughters of McCanles are fine people and we do not wish to hurt them, neither do the folks who know them. They say Wild Bill was a good law-abiding man but all say McCanles was a bad man.

The first account of the affair we take from an old history published about 1882, the author says:

“The facts are from S. C. Jenkins and S. J. Alexander, who arrived at the ranch within two hours after the trouble took place and before the bodies were removed and from many others, and reports of Wild Bill’s trial. The facts the author gives are these: Wild Bill at this time was tending stock for the Ben Holiday State Company at Rock Creek Station. James McCanles, once owner of the station did not have an enviable reputation, was a southern sympathizer, and was trying to raise a company to assist the south. He came to Wild Bill and tried to persuade him to join and turn over the stage company’s stock. On his refusal, McCanles threatened to kill him and take the stock. That afternoon McCanles returned with three other men and started to enter the house. Wild Bill shot him. Two of the other men were killed and one got away. At Wild Bill’s trial, which was held in Beatrice, no one appeared against him. His plea was self-defense and he was cleared. The historian closed with the following: “It was evident that the design of the men was to take Wild Bill’s life or it is most probably that the man who got away would have appeared against Wild Bill at the trial.”

The story of the affair, as told by Wm. McCanles, Jr., son of David McCanles, killed by Wild Bill, appeared in the Fairbury Journal of Sept, 25, 1930, states this:

This part of the story by William McCanles bears out the stories told around Fairbury by those whose parents knew David McCanles to be brutal and overbearing. Now the question comes up — why did not William McCanles, Jr. appear against Wild Bill at the trial? He was an eye witness and perhaps 12 years of age.

We had a long talk with a man who’s name we can not now recall. His folks were neighbors of the McCanles family. Mrs. McCanles often visited with his folks and he had often heard her speak of the affair. She never blamed Wild Bill.  He told about Kate Shell who lived at the west station and kept a store where she sold food, supplies and whiskey to those going over the old Oregon trail. Mrs. McCanles did not like her but every once in a while she had to get up a dinner and invite Kate over. Then Kate would have a big dinner and McCanles would have to go over there, just had to go!

A while ago, a writer for the Dearborn Independent, Henry Ford’s paper wrote up the whole affair, told a lot about the part Kate played and there were never any denials.

Then about the toll bridge. We visited the place where it stood, only a few stones are left now. The logs of which it was made had crumbled to dust or been carried away. Rock Creek is just a little stream and in crossing, one hardly knew that they had crossed a creek. It wasn’t a bad place at all — just a little work without a bridge would have made it far better than hundreds of other places on the old trail that they had to cross. But the toll charged for crossing brought in a lot of money to McCanles. To the north a little ways was a good crossing but if the travelers attempted to cross there some one would appear with a gun and insist that they were trespassing and they would have to go back and pay to cross the bridge.

Out in Canon City, Colorado, where an old friend of ours lives, Blancett by name, who’s father had a station on the Oregon Trail farther east from the McCanles station. He knew both Wild Bill and McCanles and knew of the Wild Bill, McCanles affair. Later he became a plainsman and a scout. To help pass the time away, he tells of his early day experiences to a friend who writes them up for a Colorado paper, The Sunday Post. In one of the articles appears the following: 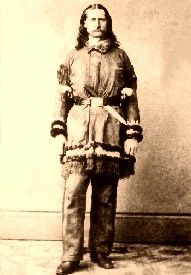 “In 1860, my father, my brothers and I were keeping the stage station at Ashpoint, Kansas. He said Wild Bill was inclined to be reticent, talked little of himself or about others, he was a man of action not words. His duty was to guard the cash box on the coach that carried it. I never saw him without his feet off this box. This box was the particular trust of the guard and he was under orders to guard it with his life. Bill handled a pistol with the speed of lightning. When talking, wishing to emphasize something he had a way of throwing his right or left hand towards you with the trigger finger pointed at you. His hands moved with incredible swiftness and I believe he practiced this mannerism with such purpose that it became a part of his nature and probably resulted in making him the fastest two-gun man of his day. He was not a wanton killer and used his guns only in line of duty. He had plenty of opportunity to kill oftener than he did, knowing that he could start a graveyard at any time and the government would pay all funeral expenses. We never knew him to be intoxicated and never knew him to kill but one man except in line of duty. The exception was a man names McCanles who kept the Rock Creek Station near the Little Blue river. The two men got into a dispute, no one seems to know why and Bill drew his gun first. My father and McCanles were friends and were both station keepers. In closing, Mr. Blancett says: ‘Anyone who wanted to make the acquaintance of Wild Bill, and would mind their own business, not get too inquisitive, would find him a perfect gentleman in every way.’ In those days he was not known as “Wild Bill,” that name did not become general until in the early ‘70’s at which time I had lost track of him.”

From the Fairbury Journal of sometime ago we take the following:

“George Jenkins of Bellingham, Washington was in Fairbury this week accompanied by his wife visiting places of interest with which he was familiar [with] in an early day. Mr. Jenkins is a son of the late [?.C.] Jenkins, who came through here in 1858 and brought his family out here to live in 1859, remaining until 1884. His family was the first to permanently locate in this country. George  Jenkins was born in the house where Wild Bill killed McCanles, year of birth, 1864. His father,. C. Jenkins, was the second county superintendent of schools, Justice of the Peace, a county commissioner, and member of the Legislature. Referring to the McCanles tragedy, he recalls hearing his father and mother tell about it many times. Jenkins says his father told him McCanles had made threats to run off livestock from the ranches of the settlers for the benefit of the Confederacy and that the settlers were organized to resist such attempts, that his mother expressed extreme relief when the news reached them that McCanles had been killed, that his father helped bury the bodies of McCanles, Woods and Gordon, what the talk always was at the Jenkins home that McCanles was a wild reckless man and a Southern sympathizer.” 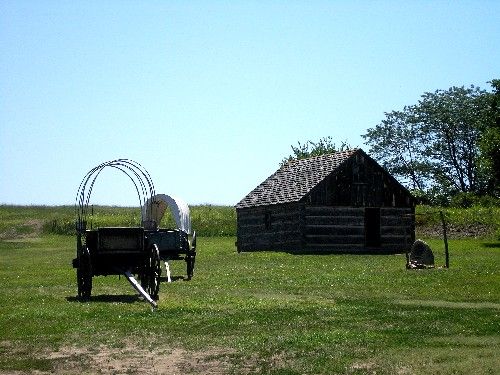 Another story published in the DeWitt Times News, a few years ago covers a little different phase and was told by the foreman of the state stations. This man tells it about this way:

“At the time of this affair I was at a station farther west and reached this station just as Wild Bill was getting ready to go to Beatrice for his trial. He wanted me to go with him and as we started on our way, imagine my surprise and uncomfortable feeling when he announced his intention of stopping at the McCanles home. I would have rather been somewhere else, but Bill stopped. He told Mrs. McCanles he was sorry he had to kill her man then took out $35.00 and gave it to her saying: ‘This is all I have, sorry I do not have more to give you.’ We drove on to Beatrice and at the trial, his plea was self-defense, no one appeared against him and he was cleared. The trial did not last more than fifteen minutes.”

From an old history of La Salle County, Illinois we take the following:

W.A. Hickok, father of Wild Bill, came here from Grand Isle County, Vermont to Union Grove, Putnam County, Illinois in 1833. On June 16, 1834 they went to Baileys Point with Reverend Gould and Isaac Fredenburg, then to Troy Grove, La Salle County in November, 1836. He was deacon of the Presbyterian Church and opened the first store kept at Homer. He was a worthy man and died on May 5, 1852.

His widow, a much-respected woman, had three sons left — Lorenzo, Hiram and Bill. James P. “Wild Bill,” born and raised at Troy Grove, became notorious on the western frontier and won the name of “Wild Bill.” A man over six feet tall, lithe and active, he was more than a match for the roughs he met on the debatable ground between civilized and savage life and is said to have often killed his man. At one time he is said to have killed four men in 60 seconds–they were on his track seeking his life. He served with Jim Lane in the Kansas troubles, was elected constable while a minor in Kansas, was for two years, a U. S. Marshal at Abilene, Kansas, and was regarded as a very efficient and reliable officer. He was killed at Deadwood, South Dakota on August 2, 1876 while playing cards. His assailant came silently behind him and shot him in the head. His murderer was tried by a mob jury and acquitted, but later was arrested under forms of law, convicted and hung.

The interview of F. J. Elliott was conducted by George Hartman, a Work Projects Administration (WPA) Writer WPA writer from Lincoln, Nebraska on November 26, 1938. Elliott was from Wilbur, Nebraska. The article as it appears here; however, is not verbatim as it has been edited for corrections and ease of the modern reader.