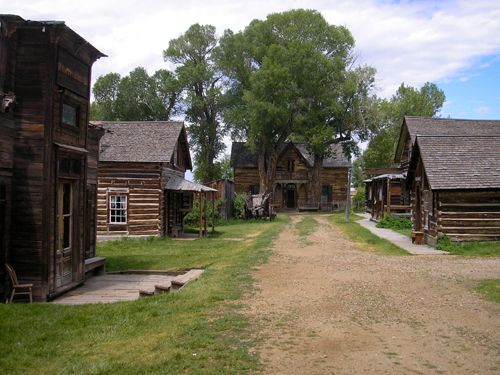 Numerous buildings have been dismantled from other Montana areas and have been restored on Nevada City’s back streets. Photo by Kathy Alexander.

Just 1 ½ mile west of its more famous neighbor of Virginia City, the old mining camp of Nevada City started at the same time when gold was discovered in Alder Gulch in 1863. Numerous settlements were established along Alder Gulch, including the camps of Summit, Adobetown, Central City, and Junction, with Virginia City in the middle. The scattering of mining camps and buildings that sprawled up and down the gulch for some 14 miles was also known as Fourteen-mile City.

Nevada City was comprised of placer miners working several mining districts, including Browns Gulch, just south of the town, and Granite Creek, about two miles northwest of Nevada City. These and other claims would later become part of the Virginia City Mining District.

Initially, the entire mining district was part of the Idaho Territory. Until Virginia City became the Montana territorial capitol in 1865, there was no law except that of the miner’s court.

On December 19, 1863, Nevada City’s main street was the setting for the miners’ court trial of George Ives, who brutally murdered a popular Dutchman named Nicholas Tibalt. The trial, which lasted three days and was attended by as many as 2,000 area residents, finally found that Ives had shot Tibalt before stealing his gold and several mules. After the miner’s jury found Ives guilty, proceedings immediately began to hang him. Within no time, a 40-foot pole was run through the window of an unfinished house nearby, and a rope fastened to its end. Just 58 minutes after his conviction, Ive’s life ended on December 21, 1863. This first trial, conviction, and execution would become the catalyst for forming the infamous Montana Vigilantes. Within the next month, some 24 men found guilty by the vigilantes would also be hanged in the area.

Nevada City quickly peaked, boasting dozens of businesses and cabins. However, by 1869, the population of the mining camp had already fallen to about 100 people. However, it still sported three general stores, two saloons, a blacksmith, a butcher shop, a livery stable, a brewery, and a Masonic Hall. However, by 1876, Nevada City had become a ghost town as the miners moved on to new finds. 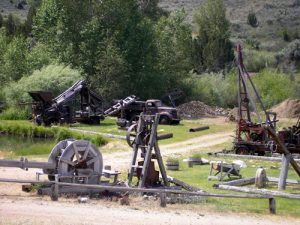 In the first five years of Alder Gulch’s heydays, some 30-40 million dollars in gold were taken from the district. Although small mining operations continued to work the original claims for several years, no large operations occurred again until 1896, when the Conrey Placer Mining Company was organized to dredge the gulch. Dredges went to work in 1899 and continued for the next 24 years, processing more than 37 million cubic yards of ground along seven miles of Alder Gulch. By the time the dredges ceased to operate in 1923, some ten million dollars in gold had been recovered, and in their path, many of Nevada City’s buildings were destroyed. The dredges were then disassembled, the equipment sold for salvage, and the heavy wooden barges were left to be reclaimed by Mother Nature slowly. Other original Nevada City buildings were destroyed when the highway was built through the area.

However, the few original buildings that remained were saved by the last residents in Nevada City – Cora and Alfred Finney. Later, in the 1950s, came a couple named Charles and Sue Bovey, who had been “collecting” old Montana buildings since the 1940s. Many of these buildings were first displayed at the Great Falls fairgrounds in an exhibit known as “Old Town.”

However, in 1959, Bovey was asked to remove the Old Town exhibit. Soon, careful disassembly of the buildings began to take place, with their new home becoming that of Nevada City’s back streets. The town’s original layout was retained on sites where previous buildings once stood. 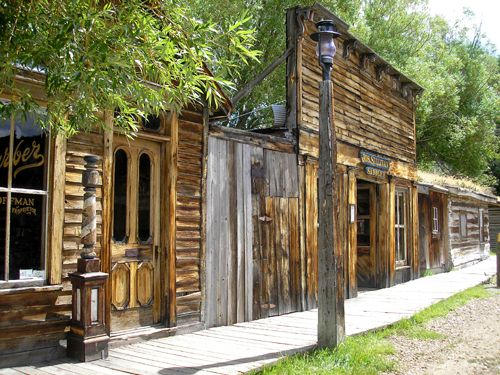 This row of buildings on Nevada City’s back streets includes an original barbershop moved from Elkhorn, Montana, and Sullivan’s Saddlery, which initially housed the Indian Agency at Fort Benton, Montana. Photo by Kathy Alexander.

In 1964, a 1.5-mile railroad line was built, linking Nevada City to Virginia City, and a railroad museum was stabled to protect the old railroad equipment. The last building was moved to Nevada City in 1978. “New” buildings were also constructed to display a town that genuinely represented life in an early Montana settlement. In 1997, the State of Montana purchased the Bovey properties in Virginia and Nevada City.

Today, the town is an outdoor historical museum with numerous historic buildings, artifacts, and furnishings. Owned by the State of Montana and operated by the Montana Heritage Commission, the old townsite provides more than 90 historic buildings from various places around Montana, original Nevada City structures, and re-created buildings.

The Nevada City Music Hall, which houses the most extensive public collection of automated music machines in North America, welcomes visitors to the site. The historic building was initially constructed in 1912 as the Recreation Hall at Canyon Lodge in Yellowstone Park. 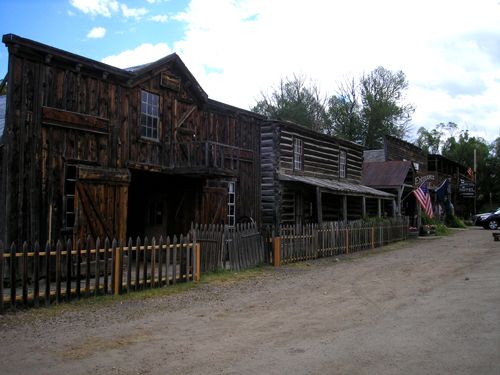 Across the street is the reconstructed depot and engine house, which features a 1910 Baldwin Steam Locomotive which travels to Virginia City. Original Nevada City buildings include the jail where George Ives was housed, the Fenner Barn, the Star Bakery, the Finney homestead, and Dr. Byam’s home. Byam was the judge at the trial of George Ives. More buildings that have been moved from other locations include the Nevada City Emporium, an 1880s-era building that came from Dillon; the Nevada City Hotel, which once housed an 1860’s stage station south of Twin Bridges; Sullivan’s Saddlery which once stood as the Indian Agency at Fort Benton, and dozens of others.

There is an admission fee for entry. Nevada City is about 27 miles southeast of Twin Bridges, Montana, on Highway 287.