The Meade Hotel operated sporadically over the years until it closed for the last time in the 1940s. Today, the old hotel is said to be the most haunted place in town. Photo by Kathy Weiser-Alexander.

Bannack, Montana was born in 1862 when gold was found along Grasshopper Creek. Like other gold rushes, miners rushed to the settlement in search of their fortunes and before long the hills around Bannack were filled with as many as 10,000 miners. With that many men during the era of the rough and tumble days of the Old West, there was bound to be violence and even a few lingering spirits.

Not long after the settlement was formed, in walked a man named Henry Plummer. Handsome, well-dressed, and charismatic, he gained the trust of the area miners and was soon elected sheriff of the burgeoning community. However, little did the unsuspecting citizens of Bannack know, but their new sheriff led a secret band of road agents called the “Innocents”, who began to terrorize the travelers between Bannack and Virginia City, robbing and killing more than 100 men over the next several months.

In December 1863 the miners formed the Montana Vigilantes and during the next forty-two days, the Vigilantes hanged 24 of the gang members, including Henry Plummer. Later, historians questioned the authenticity of the outlaw tale, suggesting that the whole story was only a cover for the ruthless vigilantes themselves. Today, many say that the ghost of Henry Plummer haunts this old settlement, which has long since become a ghost town. Perhaps he wants to avenge his name. 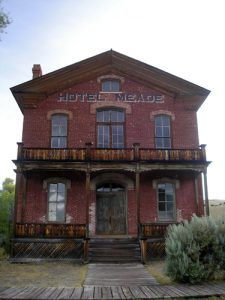 After Bannack lost the county seat, the courthouse  became the Hotel  Meade

At the Hotel Meade, which was originally built as a courthouse in 1875, there are numerous stories of ghostly activity. When Bannack lost its county seat status to nearby Dillon in 1881, the building sat vacant until 1890 when it was remodeled into a plush hotel. The hotel opened and closed sporadically through the years with the ebb and flow of mining activity. At one time the building acted in the capacity of a hospital.

Cold spots, the apparition of a teenage girl, and sounds of crying children are often reported by those who visit this old building. The first sighting of a young girl was well over a hundred years ago. The teen is said to be a girl named Dorothy Dunn who drowned in a dredge pond along the creek long ago. Shortly after her death, she made her first appearance to her best friend, who was with her at the time of her death.

Since then there have been multiple sightings of the teenage girl wearing a long blue dress on the second story of the old hotel. These reports often come from children, one of which reportedly stated that the ghost of Dorothy Dunn tried to talk to her. The seven-year-old could see Dorothy’s mouth moving but no sound came out. Dorothy has also been sighted standing in an upstairs window by passersby on the street below.

Yet more sightings have been reported throughout the town of ghostly women dressed in their best finery.

When mining played out, Bannack became a ghost town in the 1940s. However, the Montana Department of Fish, Wildlife, and Parks saved the town from the elements and vandalism by making it a state park on August 15, 1954. 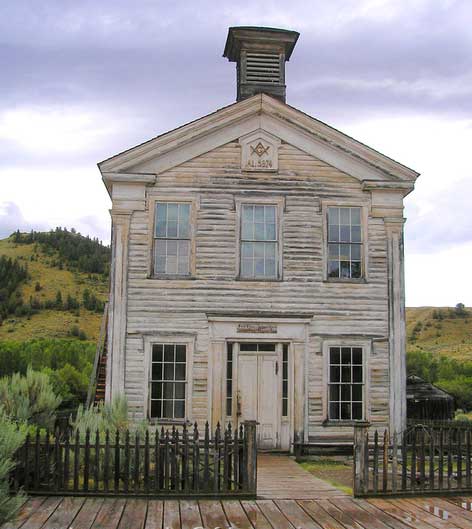 Today, over sixty structures remain standing, most of which can be explored. The staff preserve, rather than restore the buildings of this old town allowing visitors an opportunity to relive the American West.

See more of the history of Bannack here: Bannack, Montana – Gold to Ghost 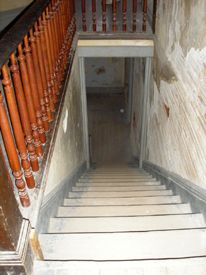 A floating orb appears at the bottom of this well-lighted stairwell.

About 12 years ago, my husband, mother-in-law, daughter, and I went on a road trip from southwest Saskatchewan to Montana. We love visiting Montana – so much to see and do. After a long day of driving, I was finally able to convince my husband to make the detour to see Bannack. I am an avid fan of American ghost towns.

After a leisurely stroll down the main road of Bannack – going into buildings that were accessible to tourists, and looking into windows of buildings that were not accessible; my daughter and I decided to sit on the front steps of the Meade Hotel while we waited for my husband and mother-in-law.

After about 10 minutes, I got up and stood next to the front door and said to my daughter “I wonder if we are allowed to go into this building?” The front door immediately groaned and creaked open – all the way to welcome us in. I was stunned. I went in and closed the door firmly behind us and waited for about five minutes to see if the door was not latched properly and would open on its own, or if there were a breeze (there was no breeze that hot day). It did not open by itself while I was there. A short while later, a couple opened the door and walked in. I am convinced that someone unseen welcomed my daughter and me into this fantastic-looking old hotel. I would love to go back and take pictures – who knows what I may find! 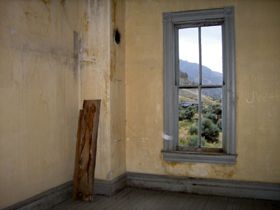 In this photo taken on the second level, there’s a bright  white orb that appears to be moving,

I got on your site because I was looking for information regarding whether there had been any paranormal sightings at the Hotel Meade. When I visited, I found a cold spot downstairs but it was upstairs, that I got very unpleasant feelings. I had a ghost meter with me and I told my husband that I did not like it there and that’s when the meter went off. I didn’t see or hear anything but the feeling continued and it felt like if we had been able to open the doors upstairs something or someone would have jumped out at us. This feeling continued throughout the second story, but it completely left me when I was downstairs again. I got nothing in any of the pictures I took in that building. — [Name withheld] September 2008.