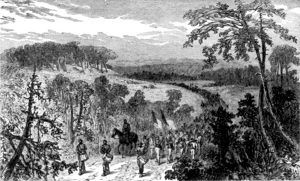 Port Gibson (May 1, 1863) – Also called the Battle of Thompson’s Hill, this conflict, taking place in  Claiborne County, was commanded by Union General Ulysses S. Grant and Confederate Brigadier General John S. Bowen. General Grant launched his march on Vicksburg in the Spring of 1863, starting his army south, from Milliken’s Bend, on the Mississippi River’s west side. He intended to cross the river at Grand Gulf, but the Union fleet could not silence the Confederate big guns there. Grant then marched farther south and crossed at Bruinsburg on April 30th. Union forces came ashore, secured the landing area and by late afternoon, began marching inland. Advancing on Rodney Road towards Port Gibson, Grant’s force ran into Rebel outposts after midnight and skirmished with them for around three hours. After 3:00 am, the fighting stopped. Union forces advanced on the Rodney Road and a plantation road at dawn. At 5:30 am, the Confederates engaged the Union advance, and the battle ensued. Federals forced the Rebels to fall back. The Confederates established new defensive positions at different times during the day but, they could not stop the Union onslaught and left the field in the early evening. This defeat demonstrated that the Confederates could not defend the Mississippi River line, and the Federals had secured their beachhead. The way to Vicksburg was open. The Union victory resulted in 861 Union casualties and 787 Confederate.

Raymond (May 12, 1863) – Taking place in Hinds County, this conflict was led by Union Major General James B. McPherson and Confederate Brigadier General John Gregg. Ordered by Lieutenant General John C. Pemberton, Confederate commander at Vicksburg, Brigadier General John Gregg led his force from Port Hudson, Louisiana, to Jackson, Mississippi, and out to Raymond to intercept approaching Union troops. Before dawn on May 12, Major General James B. McPherson had his XVII Army Corps on the march, and by 10:00 am, they were about three miles from Raymond. Gregg decided to dispute the crossing of Fourteen Mile Creek and arrayed his men and artillery accordingly.

As the Yankees approached, the Rebels opened fire, initially causing heavy casualties. Some Union troops broke, but Major General John A. Logan rallied a force to hold the line. Confederate troops attacked the line but had to retire.

More Federal troops soon arrived, and the Union forces counterattacked. Heavy fighting ensued that continued for six hours, but the overwhelming Union force prevailed, and Gregg’s men left the field. Although Gregg’s men lost the battle, they had held up a much superior Union force for a day. The battle resulted in an estimated 442 Union casualties and 569 Confederate. 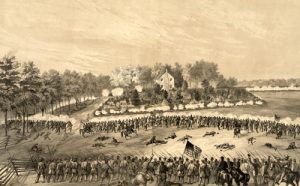 Jackson (May 14, 1863) – This battle led by Union Major General Ulysses S. Grant and Confederate General Joseph E. Johnston and Brigadier General John Gregg took place in Hinds and Jackson Counties. On May 9, 1863, General Joseph E. Johnston received a dispatch from the Confederate Secretary of War directing him to “proceed at once to Mississippi and take chief command of the forces in the field.” As he arrived in Jackson on the 13th, from middle Tennessee, he learned that two army corps from the Union Army of the Tennessee — the XV, under Major General William T. Sherman, and the XVII, under Major General James Birdseye McPherson — were advancing on Jackson, intending to cut the city and the railroads off from Vicksburg. Johnston consulted with the local commander, Brigadier General John Gregg, and learned that only about 6,000 troops were available to defend the town. Johnston ordered Jackson’s evacuation, but Gregg was to defend the town until the evacuation was completed.

By 10:00 am, both Union army corps were near Jackson and had engaged the enemy. Rain, Confederate resistance, and poor defenses prevented heavy fighting until around 11:00 am when Union forces attacked in numbers and slowly but surely pushed the enemy back. In mid-afternoon, Johnston informed Gregg that the evacuation was complete and that he should disengage and follow. Soon after, the Yankees entered Jackson and had a celebration hosted by Major General Ulysses S. Grant, who had been traveling with Sherman’s corps, in the Bowman House. They then burned part of the town and cut the railroad connections with Vicksburg. Johnston’s evacuation of Jackson was a tragedy because he could, by late on the 14th, have had 11,000 troops at his disposal and by the morning of the 15th, another 4,000. The fall of the Mississippi state capital was a blow to Confederate morale. The Union victory resulted in 286 Federal casualties and 850 Confederate. 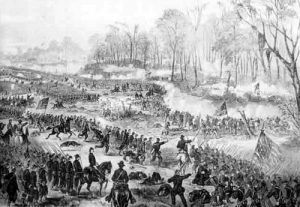 Champion Hill (May 16, 1863) – Also called the Battle of Baker’s Creek, this large conflict led by Union Major General Ulysses S. Grant and Confederate Lieutenant General John C. Pemberton took place in Hinds County. Following the Union occupation of Jackson, Mississippi, both Confederate and Federal forces made plans for future operations. Confederate General Joseph E. Johnston retreated, with most of his army, up the Canton Road; but, he ordered Lieutenant General John C. Pemberton, commanding about 23,000 men, to leave Edwards Station and attack the Federals at Clinton. Pemberton and his generals felt that Johnston’s plan was dangerous and decided instead to attack the Union supply trains moving from Grand Gulf to Raymond.

On May 16th, however, Pemberton received another order from Johnston repeating his former directions. Pemberton had already started after the supply trains and was on the Raymond Road with his rear at the crossroads one-third mile south of Champion Hill’s crest. Thus, when he ordered a countermarch, his rear, including his many supply wagons, became his force’s advance.