Iuka and Corinth Operations in Mississippi during the Civil War occurred in the late summer of 1862 when Confederate forces attempted a three-pronged strategic advance into the North. This coordinated offensive strategy was an attempt to carry the conflict to the north. This third campaign into Mississippi led to the devastating and little-studied defeats at Iuka and Mississippi — defeats that would open the way for General Ulysses S. Grant’s attack on Vicksburg, Mississippi. The last battle of the Iuka and Corinth Campaign took place at Hatchie’s Bridge, Tennessee. 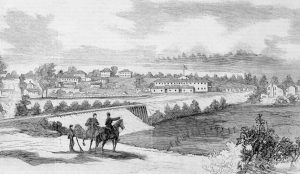 Union Major General Ulysses S. Grant, commanding the Army of the Tennessee, feared that Price intended to go north to join General Braxton Bragg against Major General Don Carlos Buell’s Army of the Ohio. Grant devised a plan for his left-wing commander, Major General E.O.C. Ord, and his men to advance on Iuka from the west, while Rosecrans’ forces were to march from the southwest, arrive at Iuka on the 18th, and make a coordinated attack the next day.

Ord arrived on time, and skirmishing ensued between his reconnaissance patrol and Confederate pickets, about six miles from Iuka, before nightfall. Rosecrans informed Grant that he would not arrive at Iuka on the 18th but would begin his march at 4:30 am the next morning. On the 19th, Ord sent Price a message demanding that he surrender, but Price refused. At the same time, Price received dispatches from Van Dorn suggesting that their two armies rendezvous, as soon as possible, at Rienzi for attacks on the area’s Federal forces. Price informed Van Dorn that the military situation had changed, so he could not evacuate Iuka immediately. He did, however, issue orders for his men to prepare for a march the next day, to rendezvous with Van Dorn.

Rosecrans’ army marched early on the 19th, but, instead of using two roads as directed, he followed the Jacinto (Bay Springs) Road. After considering the amount of time that Rosecrans required to reach Iuka, Grant determined that he probably would not arrive on the 19th, so he ordered Ord to await the sound of fighting between Rosecrans and Price before engaging the Confederates. As Rosecrans advanced, his men fought actions with Confederate troops at points along the way. About 4:00 pm, just after ascending a hill, the Union column halted because the Confederates were well-placed below in a ravine, filled with timber and underbrush. The Confederates launched attacks up the hill, capturing a six-gun Ohio battery, while the Federals counterattacked from the ridge. Fighting, which Price later stated he had “never seen surpassed,” continued until after dark; the Union troops camped for the night behind the ridge. Price had redeployed troops from Ord’s front to fight against Rosecrans’ troops. Ord did nothing, later proclaiming that he never heard any fighting and, therefore, never engaged the enemy; Grant also remarked that he had heard no sounds of battle.

Following the fighting on the 19th, Price determined to re-engage the enemy the next day, but his subordinates convinced him, instead, to march to join Van Dorn, as earlier planned. At the same time, Rosecrans redeployed his men for fighting the next day. Price’s army evacuated via the Fulton Road, protecting its rear with a heavy rearguard, and hooked up with Van Dorn five days later at Ripley. Although Rosecrans was supposed to traverse Fulton Road and cover it, he stated that he had not guarded the road because he feared dividing his force; Grant later approved this decision. Rosecrans’ army occupied Iuka and then mounted a pursuit. However, the Confederate rearguard and overgrown terrain prevented the Union pursuit from accomplishing much. The Federals should have destroyed or captured Price’s army, but instead, the Rebels joined Van Dorn and assaulted Corinth in October. Resulting in an official Union victory, estimated casualties were Union 782 and Confederate 700. This battle caused General Ulysses S. Grant to have concerns about William S. Rosecrans’  abilities and leadership. 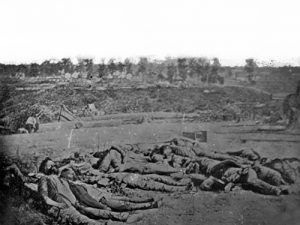 The Battle of Corinth was devastating to the Confederates, leaving in its wake 4,838 casualties.

Battle of Corinth (October 3-4, 1862) – Also referred to as the Second Battle of Corinth, this skirmish took place in Alcorn County, Mississippi under Union commander Major General William S. Rosecrans and Confederate Major General Earl Van Dorn. After the Battle of Iuka, Major General Sterling Price’s Confederate Army of the West marched from Baldwyn to Ripley, joining Major General Earl Van Dorn’s Army of West Tennessee. Van Dorn was the senior officer and took command of the combined force, numbering about 22,000 men. The Rebels marched to Pocahontas on October 1st and then moved southeast toward Corinth. They hoped to seize Corinth and then sweep into middle Tennessee. Since the Siege of Corinth, Union forces had erected various fortifications in the spring, an inner and intermediate line, to protect Corinth, an important transportation center.

With the Confederate approach, the Federals, numbering about 23,000, occupied the outer line of fortifications and placed men in front of them. Van Dorn arrived within three miles of Corinth at 10:00 am on October 3rd and moved into some fieldworks that the Confederates had erected for Corinth’s Siege.

The fighting began, and the Confederates steadily pushed the Yankees rearward. A gap occurred between two Union brigades, which the Confederates exploited around 1:00 pm. The Union troops moved back in a futile effort to close the gap. Price then attacked and drove the Federals back further to their inner line. By evening, Van Dorn was sure that he could finish the Federals off during the next day. This confidence — combined with the heat, fatigue, and water shortages — persuaded him to cancel any further operations that day. Rosecrans regrouped his men in the fortifications to be ready for the attack to come the next morning. Van Dorn had planned to attack at daybreak, but Brigadier General Louis Hébert’s sickness postponed it until 9:00 am. As the Confederates moved forward, Union artillery swept the field, causing heavy casualties, but the Rebels continued. They stormed Battery Powell and closed on Battery Robinett, where desperate hand-to-hand fighting ensued. A few Rebels fought their way into Corinth, but the Federals quickly drove them out. The Union troops continued, recapturing Battery Powell and forcing Van Dorn into a general retreat. Rosecrans postponed any pursuit until the next day. As a result, Van Dorn was defeated, but not destroyed or captured, at Hatchie Bridge, Tennessee, on October 5th. The Union victory resulted in an estimated 2,359 Union casualties and 4,838 Confederate.