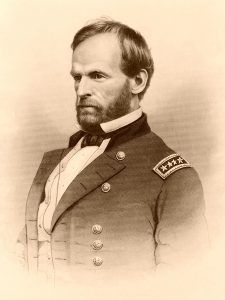 After the 1863 Vicksburg Campaign, in which the Union army of Major General Ulysses S. Grant succeeded in capturing Vicksburg and burning the state capital of Jackson, Union forces under Major General William T. Sherman turned eastward toward Meridian. Meridian was an important railroad center and was home to a Confederate arsenal, military hospital, prisoner-of-war stockade, and the headquarters for several state offices. Sherman planned to take Meridian and, if the situation was favorable, push on to Selma, Alabama, and possibly even threaten Mobile. Sherman set out on February 3, 1864, with the main force of 20,000 men from Vicksburg and ordered Brigadier General William Sooy Smith to lead a cavalry force of 7,000 men from Memphis, Tennessee, south through Okolona, Mississippi, along the Mobile and Ohio Railroad to meet the rest of the Union force at Meridian.

Meridian (February 14-20, 1864) – The Battle of Meridian took place in Lauderdale County, Mississippi when Union General Sherman launched a campaign to take the important railroad center. With the main force of 20,000 men, Sherman’s troops made feints toward various other locations along the way. To counter the threat, Confederate President Jefferson Davis ordered troops to the area from other localities. The Confederate commander in the area, Lieutenant General Leonidas Polk, consolidated several commands in and around Mortona, but lost his nerve and retreated rapidly eastward.

Cavalry units commanded by Major General Stephen D. Lee periodically skirmished with Sherman’s force. As Sherman approached Meridian, he met stiffer resistance from combined forces but steadily moved on. Polk finally realized that he could not stop Sherman and evacuated Meridian on February 14th, removing some railroad rolling stock to McDowell’s Bluff. Sherman’s troops entered Meridian the same day and began destroying the railroad tracks, continuing their work until February 19th. Smith never arrived at Meridian. Sherman left Meridian on February  20th and headed west by way of Canton, looking for Smith and his force. He did not discover what happened to Smith until he arrived back at Vicksburg. Sherman had destroyed some important Confederate transportation facilities but had to forget his aspirations for continuing into Alabama. The number of casualties in the Union victory is unknown.

Okolona (February 22, 1864) – Taking place in Chickasaw County, Major General William T. Sherman launched a campaign to take Meridian’s important railroad center. He ordered Brigadier General William Sooy Smith to lead a cavalry force of 7,000 men from Memphis, Tennessee, on February 1, 1864, south through Okolona, along the Mobile & Ohio Railroad, and to meet the rest of the Union force at Meridian, on February 10th.

With the main force of approximately 20,000 men, Sherman set out on February 3rd for Meridian but, made feints on various other locations. Against orders, Smith delayed ten days while waiting for reinforcements and did not start until February 10th. Destroying crops and railroad tracks along the way, Smith’s force met almost no opposition, and, before long, 1,000 former slaves were traveling with them. Smith was supposed to rendezvous with Major General William T. Sherman at Meridian on the 10th, but he never arrived there.

Sherman left Meridian on February 20th, due, in part, to apprehension over Smith’s whereabouts. Smith neared West Point, 90 miles north of Meridian, on February 20th, and he fought with Confederate cavalry units at Prairie Station and Aberdeen. Smith, knowing that Major General Nathan B. Forrest commanded the troops he was fighting, concerned about the fate of the former slaves with him, and not knowing how many of the enemies he faced, decided to concentrate at Prairie Station, and, on the morning of the 21st, he set out for West Point.

Shortly after dawn on February 21st, Colonel Jeffrey Forrest’s Confederate cavalry brigade engaged Smith. Withdrawing at times, Forrest drew Smith into a swamp west of the Tombigbee River. Other Rebel troops arrived, and the fighting intensified. Smith was sure that this was a trap set for him, and, discerning that he was greatly outnumbered, he ordered a retreat, leaving a rearguard. The rearguard held off the Confederates for about two hours before withdrawing in good order. 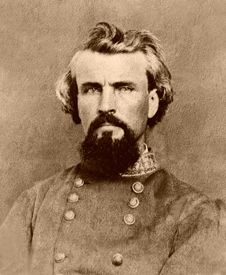 About the same time, General Nathan B. Forrest arrived and ordered a pursuit. Skirmishing occurred for the rest of the day. At dawn on February 22nd, the Rebels attacked Smith just south of Okolona on the prairie. More Confederate troops arrived, causing breaks in the Union battle line, precipitating a retreat. For most of the rest of the day, they engaged in a running battle for a distance of 11 miles, with both sides attacking and counter-attacking. Colonel Forrest was killed during one Rebel charge.

The Yankees finally broke off the fighting and headed for Pontotoc. General Nathan B. Forrest, the commander on the field, realized that his men were nearly out of ammunition and did not order a pursuit. Mississippi militia harassed Smith to the state line. Smith arrived in Collierville, Tennessee, near Memphis, on February 26th. Although Smith had caused much destruction during his expedition, Okolona forced him to retire before he could do more. Smith’s actions against Sherman’s orders jeopardized the Meridian Expedition. The Confederate victory resulted in an estimated 100 Union casualties and 50 Confederate casualties.