A series of maneuvers and battles in the Western Theater directed against Vicksburg, Mississippi, a fortress city that dominated the last Confederate controlled section of the Mississippi River. This campaign is divided into two phases by historians: Operations Against Vicksburg (December 1862-January, 1863) and Grant’s Operations Against Vicksburg (March-July 1863), which consisted of several important naval operations, troop maneuvers, failed initiatives, and eleven distinct battles from December 26, 1862, to July 4, 1863. Commanded by Major General Ulysses S. Grant, he initially planned a two-pronged approach. Half of his army, under Major General William T. Sherman, would advance to the Yazoo River and attempt to reach Vicksburg from the northeast. At the same time, Grant took the remainder of the army down the Mississippi Central Railroad. However, both of these initiatives failed, and Grant turned to waterborne expeditions on the Mississippi River south of Vicksburg, which also failed. In the end, a combination of naval and overland assaults would gain control of Vicksburg and the Mississippi River. These events are widely considered the turning point of the Civil War, and Grant’s Vicksburg Campaign is considered one of the masterpieces of American military history. 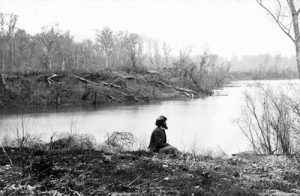 Battle of Chickasaw Bayou (December 26-29, 1862) – Also called the Battle of Chickasaw Bluffs and  Battle of Walnut Hills, this skirmish took place in Warren County, Mississippi under Union Commander Major General William T. Sherman and Confederate Lieutenant General John C. Pemberton  On December 26th, General Sherman led three Union divisions to approach the Vicksburg defenses from the northeast. Sherman and his troops disembarked at Johnson’s Plantation on the Yazoo River, while a fourth division landed farther upstream on the 27th. That same day, the four divisions of Union troops pushed their lines forward through the swamps toward Walnut Hills, which were strongly defended. On the 28th, several futile attempts were made to get around these defenses.

On December 29th, Sherman ordered a frontal assault, which was repulsed with heavy casualties. Sherman then withdrew. This Confederate victory frustrated Grant’s attempts to take Vicksburg by direct approach. Estimated casualties were 1,776 Union and 207 Confederate.

General Sherman then suggested a combined land and naval movement against the Arkansas Post 50 miles up the Arkansas River from its confluence with the Mississippi River, a base from which Confederate gunboats were attacking Union shipping. The Battle of Arkansas Post occurred on January 9-11, 1863, resulting in a Union Victory.

In the meantime, General Ulysses S. Grant spent the rest of the winter constructing alternative waterways so that troops could be positioned within striking distance of Vicksburg, without requiring a direct approach on the Mississippi River under  Confederate guns. Termed “Grant’s Bayou Operations,” these initiatives, including canals, dikes, and small dams was unsuccessful, and Grant turned his attention to other maneuvers.

After his bayou operations failed, Grant made a bold and risky decision to march the army down the west side of the Mississippi River to the south of Vicksburg, Mississippi, and either directly attack the fortress city or capture Port Hudson, Louisiana by both overland and naval forces. More …

Grand Gulf (April 29, 1863) – The first battle of this campaign took place in Claiborne County, Mississippi, between Union Rear Admiral David D. Porter and Confederate General John S. Bowen. This battle began when Admiral Porter led seven ironclads in an attack on the fortifications and batteries at Grand Gulf, to silence the Confederate guns and then securing the area with troops of McClernand’s XIII Army Corps who were on the accompanying transports and barges.

The attack by the seven ironclads began at 8:00 am and continued until about 1:30 pm. During the fight, the ironclads moved within 100 yards of the Rebel guns and silenced the lower batteries of Fort Wade; but, the Confederate upper batteries at Fort Cobun remained out of reach and continued to fire.

The Union ironclads and transports were forced to draw off. After dark, however, the ironclads engaged the Rebel guns again while the steamboats and barges ran the gauntlet. In the meantime, General Grant marched his men overland across Coffee Point to below Grand Gulf. After the transports had passed, they embarked the troops at Disharoon’s Plantation and disembarked them on the Mississippi shore at Bruinsburg, below Grand Gulf. The men immediately began marching overland towards Port Gibson. Though the skirmish resulted in a Confederate victory, the loss at Grand Gulf caused just a slight change in Grant’s offensive. The estimated Union casualties were 80, and the Confederate number is unknown.  More …

Snyder’s Bluff (April 29-May 1, 1863) – Also called the Battle of Snyder’s Mill, this conflict occurred in Warren County between Union commander Major General William T. Sherman and Confederate Brigadier General Louis Hébert. To ensure that troops were not withdrawn to Grand Gulf to assist Confederates, a combined Union Army-Navy force feigned an attack on Snyder’s Bluff, Mississippi. After noon, on April 29th, Lieutenant Commander K. Randolph Breese, with his eight gunboats and ten transports carrying Major General Francis Blair’s division, inched up the Yazoo River to the mouth of Chickasaw Bayou where they spent the night. At 9:00 am, the next morning, the force, minus one gunboat, continued upriver to Drumgould’s Bluff and engaged the enemy batteries. During the fighting, the Choctaw suffered more than fifty hits, but no casualties occurred. Around 6:00 pm, the troops disembarked and marched along Blake’s Levee toward the guns. As they neared Drumgould’s Bluff, a battery opened on them, creating havoc and casualties. The Union advance halted, and, after dark, the men re-embarked on the transports. The next morning, transports disembarked other troops but, the swampy terrain and heavy enemy artillery fire forced them to retire. The gunboats opened fire again, about 3:00 pm on the 1st, causing some damage. Later, the boats’ fire slackened and stopped altogether after dark. General Sherman had received orders to land his troops at Milliken’s Bend, so the gunboats returned to their anchorages at the Yazoo River’s mouth. The number of casualties in this Confederate victory is unknown.