Bisbee Junction – According to legend bandits loot from a train robbery was hidden here and has yet to be found.

Brigham City – Outlaw Henry Seymour and his gang robbed a stagecoach in front of the Pine Spring Stage Station in 1879 of $225,000 in newly-minted coins. The coins were enclosed in three boxes which the outlaws carried into Pine Spring Station, located between Beaverhead Station and Brigham City.  However, before they could make their getaway, a 20-man posse arrived and a gunfight ensued. After a day-long standoff, the lawmen set fire to the rear wall of the structure, and when the bandits ran from the building they were shot down. The posse made an immediate search for the coins, but they were never found.

Coconino County – Bars of gold are said to be hidden in the San Francisco Mountains.

Cochise Buried Gold – In 1899 a Southern Pacific express train was robbed of $60,000 in gold coins and bullion by lawmen turned outlaws Burt Alvord and Billy Stiles near Cochise.  Along the old trail between Wilcox and Cochise, the pair holed up in a cabin about 1/2 mile outside Cochise. Burying the gold near the cabin, they agreed they would recover it once the heat was off. However, before they had a chance, Alvord was jailed and Stiles was killed. Wells Fargo agents made a thorough search of the area, but never found the missing loot. Also See: Cochise, Arizona Train Robbery

Lost Soldier Mine – In the early 1870s soldiers from Fort Tucson ran into a waterhole filled with gold nuggets while tracking a band of renegade Apache. Though the soldiers wanted to stay and explore further, their commanding officer ordered them to continue in the pursuit of the Indians. Later, several of the men would ask for a discharge and when they were refused, some of them went AWOL only to be later found dead in the desert from dehydration. The rich waterhole is said to be located between Maricopa Wells and Quijototoa. More … 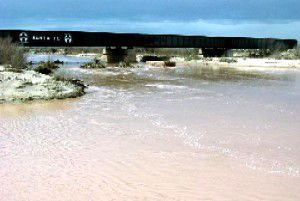 Sunset Crossing – In 1855 a prospector by the name of Darlington and his family were returning from the California gold fields to their home in Illinois. The miner had hit pay dirt and was carrying $300,000 in gold home from his successful find. However, when they reached the Sunset Crossing of the Little Colorado River, his wife suddenly took ill and died.  The man who owned the trading post was kind enough to build a box for her and when she was buried it was so heavy that it took six men to lower it into the ground. Years later it was learned that Darlington had placed half of his gold, $150,000, in the coffin as his wife’s share.  To this day the gold has never been recovered.

Mountain Springs – After attacking a wagon train a few miles northeast of the stage station at Mountain Springs, the Apache supposedly buried a cache of gold dust and silver coins in a dutch oven. As the tale goes, the treasure is hidden behind two rocks at the point of the Winchester Mountains northeast of Wilcox.

Secret Pass – A wagon train of Spanish priests headed from Mexico to California was loaded with all the religious refinements need to establish a new mission. However, while in the area of Secret Pass, the wagon train was attacked by Indians who forced them to conceal the treasure, which included chalices, crosses, candlesticks, some of which were no doubt gold, in a cave. Then all but two nuns were massacred. The sisters were able to make their way back to Mexico where they returned to tell of the tragedy. 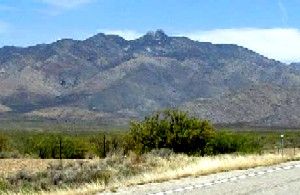 Wilcox Mexican Coins – In 1895 a Southern Pacific Railroad express car was robbed in the Dos Cabezas Mountains five miles southwest of Wilcox, Arizona. In an effort to dynamite the safe, eight sacks of Mexican silver coins, with 1,000 coins in each sack, were used to weigh it down. The explosion blew the 8,000 coins through the roof and all over the right-of-way. About 7,000 coins were recovered, but the remaining 1,000 could not be found. There have been several reports of treasure hunters finding a stray coin or two in the area.

Wild Cat Canyon – At the south end of the Chiricahua Mountains, about eight miles southwest of Portal, Arizona is a cave called “Room Forty Four. It is here that outlaw Black Jack Ketchum allegedly buried his cache after a bank robbery in Nogales in 1884.