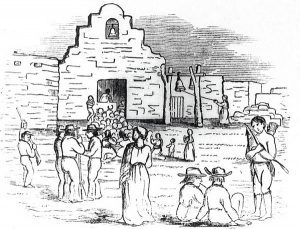 The Presidio San Agustín del Tucson site, Arizona, more commonly known as the Presidio of Tucson, was selected on August 20, 1775, by Irish mercenary Hugh O’Conor Franciscan friar Francisco Tomas Garces. This presidio was to be part of a network of forts and missions in present-day southern Arizona. The others included:

Irish mercenary Hugh O’Conor was a Lieutenant Colonel in the Spanish Army and Inspector General who had made a name for himself on the frontier of New Spain. The site was on the east terrace overlooking the Santa Cruz River floodplain. Nearby was the O’odham Indian village of S-cuk Son (Tucson) and the San Agustin Mission. 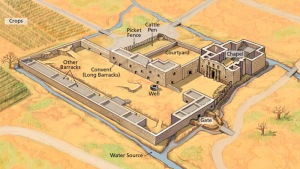 The fort’s construction probably didn’t start until October 1775, and in the beginning, it was little more than a scattering of buildings, some of which were inside a wooden palisade. However, soldiers marched north from the Presidio at Tubac the next year and began constructing the fort. However, mismanagement of funds stalled construction. The Tubac garrison and families moved north in late October of 1776, and the first correspondence was written from Tucson by Colonel Juan Bautista de Anza the next month. A near-disastrous attack by Apache raiders in June 1782 resulted in renewed efforts to complete the fort, which was finally accomplished in May 1783.

The stockaded post evolved into a 750′ square adobe fortification with a 2′ thick adobe wall, 12′ high surrounding the square plaza. Towers were located on two opposite corners, and a firing platform ran along the top of the buildings along the wall. The Commandant’s quarters were in the middle of the square, a chapel was located along the east wall, and the interior walls were lined with soldiers’ quarters, stables, and warehouses. The post was continually improved until it reached its maximum size of approximately 11 acres. Tucson flourished under Spanish rule, but the population never exceeded 400. 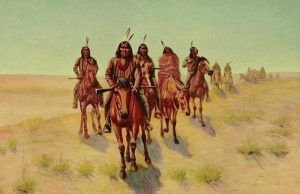 Native warriors also contributed to the Tucson Presidio’s defense several times during its history of fighting the Apache. These people allied with the Spanish because they were already long-time enemies of the Apache.

The contingents from most native groups which helped the Spanish were typically very small, about 15 men. Still, the Pima contributed dozens of warriors to Captain Ignacio Allende during these years, who fought in most if not all of the frontier expeditions. Despite being outnumbered by the thousands, the Spanish held most of their settlements but could not decisively defeat the natives and stop them from raiding. Eventually, the wars with the Apache were a stalemate, as did the Spanish growth in the Presidio, resulting in small company garrisons. At any given point, the Spanish had fewer than 300 soldiers in all their presidios and settlements in the area.

Control of the Presidio passed from the Spanish troops to Mexican troops at the end of the Mexican War of Independence in 1822. Mexican troops garrisoned the post until 1856, when the Gadsden Purchase was implemented, and all of present-day southern Arizona became part of the United States. Afterward, U.S. Dragoons briefly occupied the Presidio, and it was rapidly dismantled, with the last standing portion was torn down in 1918. 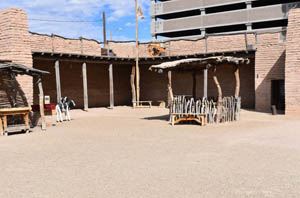 A reconstruction of the fort’s northeast corner was completed in 2007 following an archaeological excavation that located the fort’s northeast tower. Today, visitors can visit the Presidio San Agustín del Tucson Museum at Washington and Church Streets in downtown Tucson.

Open for self-guided tours; visitors travel back in time to learn about early life in Tucson, the Native Americans of the Santa Cruz Valley, and the Territorial Period settlers. 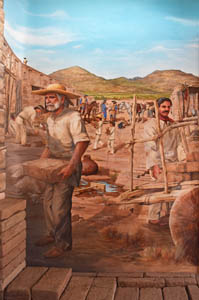 Mural at the Presidio San Augustin in Tucson, Arizona. Photo by Kathy Alexander.