Fort Orleans, Missouri, also called Fort D’Orleans, was a French fort — the first built by any European country on the Missouri River and the first settlement in what is the State of Missouri today.

It was established in November 1723 by Étienne de Veniard, Sieur de Bourgmont, and 40 French soldiers on the Missouri River, near the mouth of the Grand River, but its exact location is unknown. The fort was to be the Missouri River headquarters of the newly created Louisiana (New France) territory and was named for the Duke of Orléans. When complete, the post included a chapel, the first Catholic church in the Missouri Valley.

De Bourgmont, a friend to many Indian tribes and author of the first navigation report on the Missouri River in 1714, was chosen to build the fort by a French trading concern, The Company of the Indies. The fort served as a check to any advance by the Spanish from the southwest and as a base for New Mexican and Indian trade. Bourgmont was later made Commandant on the Missouri River. In 1724, De Bourgmont traveled to Kansas via the Kansas River to the southwest, where he fulfilled his commission to make peace with the Comanche, Osage, Iowa, Pawnee, Oto, and Makah tribes.

In 1725 he returned to France, taking several Indian chiefs and a young Missouri maiden along for a visit. The whole party delighted the French who called the girl “Princess of the Missouri,” saw her baptized in Notre Dame, and married to a sergeant. De Bourgmont was made a noble and had for his coat of arms, an Indian against a silver mountain. Bourgmont did not accompany the chiefs back to Missouri, instead choosing to stay at his home in Normandy. The following year, the fort was abandoned. One story says that it was left manned by only eight soldiers, who were killed by Indians. 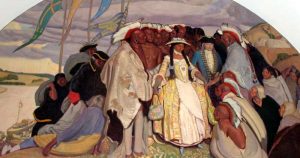 Return of the tribes to Fort Orleans from Paris

The fort’s exact location is unknown; however, a marker is located on US Highway 24 in the Wiese Roadside Park about one mile northeast of De Witt, Missouri.