Lake of the Ozarks from HaHa Tonka State Park, Missouri by Kathy Weiser-Alexander.

The Missouri Territory was admitted to the Union on August 10, 1821, making it the 24th state.

Missouri is known as the “Show Me State,” which some say began in 1899 when Congressman Willard Duncan Vandiver stated, “I’m from Missouri and you’ve got to show me.”

Called the Brothel Law, it is illegal in Missouri for more than four unrelated persons to occupy the same dwelling.

The ice cream cone was invented at the Missouri World’s Fair in 1904 when an ice cream vendor ran out of cups and asked a waffle vendor to help by rolling up waffles to hold ice cream.

Worrying squirrels is not tolerated in Missouri.

The most powerful earthquake to strike the United States occurred in 1811, centered in New Madrid, Missouri. The quake shook more than one million square miles and was felt as far as 1,000 miles away. 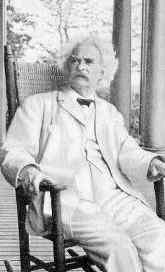 Samuel Clemens, more familiarly known as Mark Twain, was born in Florida, Missouri, and grew up in nearby Hannibal. Beginning his career as a printer’s apprentice for the Missouri Courier in Hannibal, he eventually wrote for the Keokuk, Iowa Saturday Post. Soon thereafter, however, he abandoned his literary career and spent 18 months as a riverboat pilot on the Mississippi River. After the Civil War, he returned to writing for newspapers and magazines, before writing his novels based on life on the Mississippi River, such as Tom Sawyer and The Adventures of Huckleberry Finn.

It is unlawful to throw hard objects by hand in Missouri.

Kansas City is known for its barbeque cuisine beginning in 1908 when Henry Perry, the “Father of Kansas City BBQ” started selling his smoked meats in an alley stand in the Garment District. As his tasty food gained popularity he moved up until he was running his full-time operation out of an old railroad car near the famous corner of 18th & Vine.

Anyone under the age of 21 who takes out household trash containing even a single empty alcohol beverage container can be charged with illegal possession of alcohol in Missouri.

Daniel Boone lived longer in Missouri than in any other state and regarded Missouri as his home.

Harry S. Truman was born in Lamar, May 8, 1884, and was raised in Independence. Beginning as a successful Missouri farmer, he served in France during World War I and after the war opened a men’s clothing store in Kansas City. An active Democrat, he became a Senator in 1934. As the 33rd President of the United States, Truman ordered the use of atomic weapons against Japan at the end of World War II.

Some of the names of Frontier Missouri chewing tobacco include “Scalping Knife,” “My Wife’s Hat,” “Lock and Chain,” and “Wiggletail Twist.”

Missouri was the third most fought-over state in the Civil War, right after Virginia and Tennessee.

The first train of the Atlantic-Pacific Railway, which became the St. Louis-San Francisco Railway, or “Frisco,” arrived in 1870.

“Madonna of the Trail” monument in Lexington tells the story of the brave women who helped conquer the west and is one of 12 placed in every state crossed by the National Old Trails Road, the route of early settlers from Maryland to California.

In Buckner, Missouri, yard waste may be burned any day except Sunday. 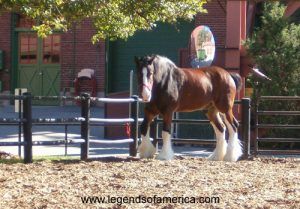 Anheuser-Busch brewery in St. Louis, Missouri is the largest beer producing plant in the nation.

The first successful parachute jump to be made from a moving airplane was made by Captain Berry at St. Louis, in 1912.

Kansas City has more miles of boulevards than Paris and more fountains than any city except Rome.

Missouri ties with Tennessee as the most “neighborly” state in the U.S., bordered by eight states.

St. Louis is also called, “The Gateway to the West” and “Home of the Blues”.

On July 3, 1985, the honey bee was officially declared the state insect. 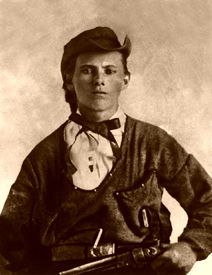 Jesse Woodson James was born in Kearney, Missouri, the son of a Baptist minister. Some believe that cruel treatment by Union soldiers during the Civil War was what turned Jesse and his brother Frank into a life of crime after the war. Their first bank robbery got them $60,000 from a bank in Liberty, Missouri. For 15 years, Frank and Jesse robbed trains and banks throughout the US. In 1876, Jesse and Frank were involved in a robbery along with the Younger Brothers and other gang members. The Pinkerton detectives killed or wounded all of them except Frank and Jesse. From that point, Jesse, his wife, and children went into hiding, but the $10,000 price on Jesse’s head led Bob Ford to shoot him at his St. Joseph, Missouri home in 1882 to collect the reward.

Laura Elizabeth Ingalls, writer of Little House on the Prairie settled in Missouri with her husband Almanzo Wilder.

The first ready-mix food to be sold commercially was Aunt Jemima pancake flour. It was invented in St. Joseph, Missouri, and introduced in 1899.

Missouri has an official state rock – the Mozarkite adopted by the Missouri legislature on July 21, 1967.

During Abraham Lincoln’s campaign for the presidency, a dyed-in-the-wool Democrat named Valentine Tapley from Pike County, Missouri swore that he would never shave again if Abe were elected. Tapley kept his word and his chin whiskers went unshorn from November 1860 until he died in 1910, attaining a length of twelve feet six inches.

St. Louis was the site of the demonic possession incident that inspired the book, and later the movie, “The Exorcist.”

Before 1866 it was illegal to educate blacks in the state of Missouri. The Reverend John Berry Meachum found a way around the law by taking his students out on a boat in the middle of the Mississippi River and holding class.

In the early 19th century, the folk song, Shenandoah, was sung about a trader in the Missouri River area who fell in love with the daughter of the Algonquian chief, Shenandoah. Sailors heading down the Mississippi River took up the slow, rolling melody for the slow, rolling work of hoisting a ship’s anchor, changing the words to suit their purpose.

Sedalia has been called the cradle of classical ragtime. 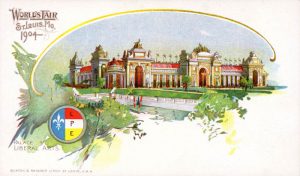 The soft drink Dr. Pepper was introduced at the 1904 World’s Fair in St. Louis. 7-Up also was invented in St. Louis.

Leroy “Satchel” Paige received his nickname as a young boy when he worked as a redcap and “looked like a walking satchel tree.” He was noted for his famous “hesitation pitch.”

Maple Leaf Rag became one of the first pieces of American sheet music to sell over one million copies.

Missouri has 5,500 recorded caves. Nearly 20 Missouri caves are called or connected to saltpeter, which was mined in some Missouri caves in the early 1800’s because nitrate was needed for the manufacture of gunpowder. At least 13 cave names are associated with “beaver,” 36 with “bear,” 13 with “panther,” and 17 with “wildcat.” More than 30 have “buzzard” in their names.

Anyone under the age of 21 who takes out household trash containing even a single empty alcohol beverage container can be charged with illegal possession of alcohol in Missouri.

Many historians believe that the Civil War began along the border of Missouri and Kansas when Missourians and Kansans battled over whether Kansas would become a “free-state” or a “slave state.” The border warfare began in 1854, seven years before the start of the Civil War.

St. Louisans consume more barbecue sauce per capita than any other city in America.

Blanche Kelso Bruce, the slave child of a Mississippi planter and a slave, became the first African-American to serve a full term in the U.S. Senate in 1875. He founded a school for blacks in Hannibal.

Creve Coeur’s name means broken heart in French, comes from nearby Creve Coeur Lake. Legend has it that an Indian princess fell in love with a French fur trapper, but the love was not returned. According to the story, she then leaped from a ledge overlooking Creve Coeur Lake; the lake then formed itself into a broken heart.

In Missouri, minors are not allowed to purchase cap pistols, however, they may buy shotguns freely.

The most destructive tornado on record occurred in Annapolis, Missouri on March 18, 1925. In three hours, it spun through the town leaving a 980-foot wide trail of demolished buildings, uprooted trees, overturned cars, and left in its wake 823 people dead and almost 3,000 injured.

Iced Tea was first served at the St. Louis World’s Fair in 1904. 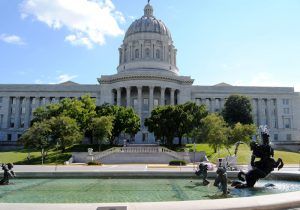 The present Missouri Capitol in Jefferson City was completed in 1917 and was the sixth in Missouri history. The first seat of state government was housed in the Mansion House in St. Louis, the second was in the Missouri Hotel in St. Louis, St. Charles was designated as the temporary capital of the state in 1821 and remained the seat of government until 1826 when Jefferson City became the permanent capital city. The current building was the third in Jefferson City as the first burned in 1837, the second burned in 1911.

The state animal is the Mule.

A milkman may not run while on duty in Missouri.

The “Missouri Waltz” became the state song under an act adopted by the General Assembly on June 30, 1949.

Kansas City has more miles of freeway per capita than any metro area with more than 1 million residents.

Frightening a baby is in violation of the law in Missouri. 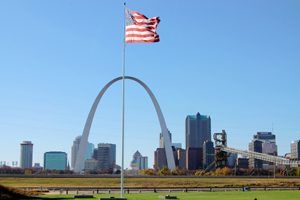 Jefferson National Expansion Memorial consists of the Gateway Arch, the Museum of Westward Expansion, and St. Louis’ Old Courthouse. During a nationwide competition in 1947-48, architect Eero Saarinen’s inspired design for a 630-foot stainless steel arch was chosen as a perfect monument to the spirit of the western pioneers. Construction of the Arch began in 1963 and was completed on October 28, 1965. In February 2018, President Donald Trump signed legislation renaming the Memorial “Gateway Arch National Park”.

It’s illegal to sit on the curb of any city street and drink beer from a bucket.

The tallest man in documented medical history was Robert Pershing Wadlow from St. Louis. He was 8 feet, 11.1 inches tall.

Missouri was named after a tribe called Missouri Indians; meaning “town of the large canoes”

Situated within a day’s drive of 50% of the U.S. population, Branson and the Tri-Lakes area serves up to 65,000 visitors daily.

Should you decide to provide alcoholic beverages to an elephant in Missouri, you could be arrested.

The tallest monument built in the U.S., the Gateway Arch, in St. Louis, is 630 feet tall.

Missouri’s oldest community, Saint Genevieve, was founded as early as 1735.

Saint Louis University received a formal charter from the state of Missouri in 1832, making it the oldest university west of the Mississippi River.

Dancing is strictly prohibited in Missouri. 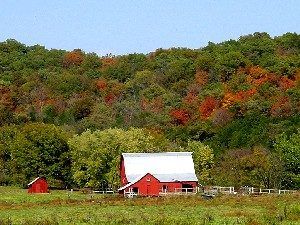 Hermann, Missouri is a storybook German village with a rich wine-making and riverboat history that is proudly displayed in area museums. Built in 1836 as the “New Fatherland” for German settlers, the town has achieved national recognition because of its quality wines and distinctive heritage.

On Sucker Day in Nixa, Missouri, school closes officially and the little town swells to a throng of 15,000 hungry folks. All craving a taste of the much-maligned but delicious bottom-dweller fish loathed by almost everyone else.

During the Civil War, Missouri was the scene of more than 1,000 battles.

Missouri- The Show Me State