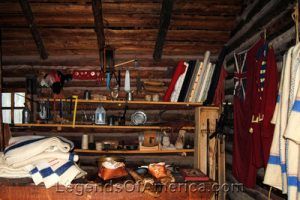 The North West Fur Company Trading Post is a reconstructed fur trading post on the Snake River west of Pine City, Minnesota. The original post was established in the fall of 1804 by John Sayer, a partner in the North West Company, and built by his crew of voyageurs.

For over two centuries, the North American fur trade brought American Indians and European-Canadians together in the mutual enterprise of exchanging native trapped furs for European manufactured goods. The fur trade, the first international business exchange between people in the Upper Mississippi River region and Europe, was also notable as a multi-cultural enterprise, depending on the expertise of people with dramatically different cultures and languages working interdependently. These included the European traders, the American Indians, principally the Ojibwe, who trapped and killed the animals and prepared the pelts to trade with the Europeans; and the French-Canadian voyageurs, strong, hard-working canoe men who transported furs and goods great distances. The American Indians also made invaluable contributions to the European’s survival, introducing them to wild rice, corn, and other native foods and the birch bark canoe. 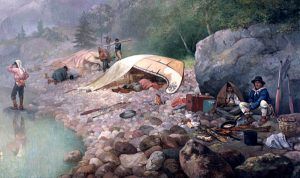 The driving force behind the earliest European exploration and settlement of the Great Lakes region was not to establish a northwest route to Asia or conquer and settle a new land, but rather, it was the demand for a hat. The “beaver,” as the hat was called, topped the heads of fashionable Europeans for some 200 years, ranging in style from the tri-cornered fashion of the late 1700s to the stovepipe top hat of the 1800s. While rabbit and muskrat furs were also used, the beaver’s “wool,” with its tiny interlocking barbs, was preferred for its ability to stand up well to weather and wear.

At that time, Europe’s beaver populations were largely depleted through overhunting which drove the demand in the New World with its plentiful supply of fur-bearing animals. To meet the demand, French, British and Scottish traders, bearing manufactured supplies including iron tools, kettles, knives, guns, cloth, and other items, traded with the American Indians for furs.

After the British defeat of the French in the French and Indian War in 1763, British and Scottish traders were dominant in the fur trade. The bourgeois, as the traders were called, managed the affairs of the trading posts, bartering with the American Indians for furs in exchange for manufactured goods such as kettles, knives, guns, hatchets, cloth, beads, etc. 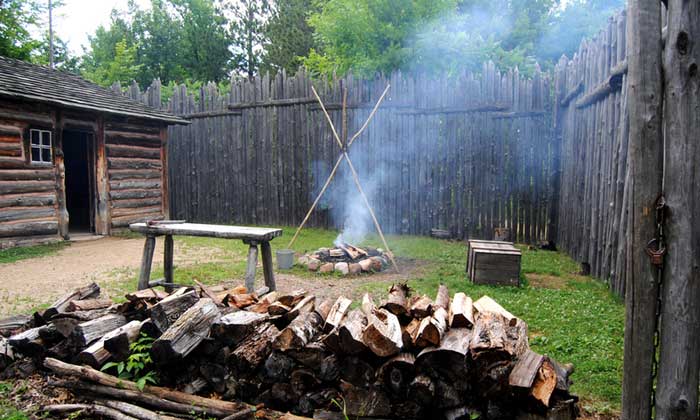 The North West Company was formed in Montreal, Canada in the mid-1780s from a partnership of British merchants who wanted to counter the monopoly over the fur trade by the Hudson’s Bay Company. The North West Company established a large post at Grand Portage and built several other forts to house wintering voyageurs. Besides the Snake River forts, they also established forts at Fond du Lac, (now part of modern Duluth), Big Sandy Lake, and Leech Lake in Minnesota.

By the 1790s, the Montreal-based North West Company had extended its fur trade network from the St. Lawrence River Valley to beyond the foothills of the Rocky Mountains. Scattered across a vast network of waterways were over 100 wintering posts, each located near Indian hunting and trapping camps that were the main source of furs. One of the largest posts in the late 1700s was at Grand Portage on Minnesota’s Lake Superior north shore. The North West Company Fur Post near Pine City was one of several smaller trading posts from which furs were shipped north to bigger posts, such as Grand Portage and Fort William in what is now Canada.

A typical fort would include a dwelling for the clerk, a storehouse, and a bunkhouse for the 10-20 voyageurs who spent the winter. During the winters, the voyageurs would collect the pelts of beaver, otter, muskrat, deer, bear, marten, and other animals whose hides were useful. Dakota and Ojibwe men would kill and skin the animals, while the women would prepare the hides by stretching and drying them. The hides were typically regarded as the women’s property, so they would arrange the sales with the clerk of the trading post. In return, the clerks would supply the Indians with trade goods, such as firearms, blankets, and cooking utensils. The furs were sold to Europeans who made felt hats and fur coats. 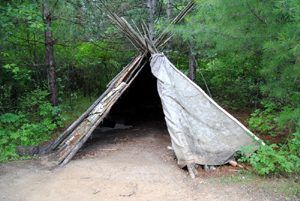 The fur trade was made-up of individuals of vastly different backgrounds and experiences—wealthy partners, hard-working clerks, colorful voyageurs and skilled Native men and women. Each had an important role in the operation of the business and was dependent on one another.

In early September 1804, John Sayer of the North West Company and his crew, including eight voyageurs and 4.5 tons of European-made goods, departed from Fort St. Louis near modern-day Superior, Wisconsin. Sayer was headed for the southern edge of Ojibwe territory. On the journey of more than two weeks, he and his men traveled up the Brule River, portaged overland to the Upper Lake St. Croix, paddled down the St. Croix, then headed up the Snake River, where Sayer intended to build a post near Cross Lake for his wintering operations. However, after conferring with Ojibwe leaders, he changed the location to a sandy ridge about two miles up the Snake River. 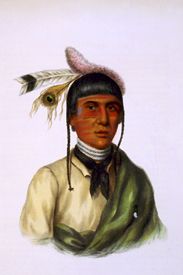 It was perfect for the location of a post surrounded by forest, wetlands and prairie openings. Wild rice, berries, and maple sap grew in abundance, it was rich with game animals including deer, bear, and beaver, and the river provided plentiful fish including lake sturgeon, bass, and walleye.

Settling at the site, Sayer directed his men to build a six-room row house, surrounded by a palisade. In a little more than six weeks, the post was completed. The row house included a storehouse, a trading room, and lodging for Sayer and his Native wife, his clerk, perhaps a servant, and a crew of eight workmen where they passed the winter. To celebrate the post’s completion, the men raised the flag and Sayer gave each of his men a pint of rum.

In the weeks that followed, Sayer traded with the Ojibwe for wild rice, maple sugar, meat, and furs. He sent his men out fishing and to visit the hunting camps, conferred with local leaders and presented them with ‘gifts’, as the tribe preferred to view the transactions of trade that way. He provided credit to the hunters and accepted their furs in payment for the manufactured goods they buy from him. He also wrote in his journal nearly every day.

In the spring, after 223 days of trading along the Snake River, Sayer settled the debts, packed the furs, and departed with his men. The canoe voyage from the Snake River to Fort William took 4 to 6 weeks and included a journey up the St. Croix during the spring flood.

Journals show that Sayer and his crew never returned to the post, although evidence shows it was used for several more years.  In the 1930s, a local Pine City resident discovered flint used for rifles, which ultimately led to the excavation of the site in the 1960s.  It was from Sayer’s journal and the excavation that the Minnesota Historical Society was able to reconstruct the past. 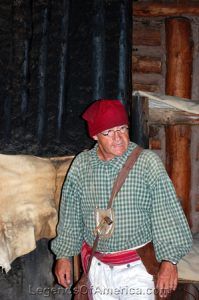 Our tour guide was one of the best we have experienced at a stop like this.

Today, the site of the North West Company Fur Post has been authentically reconstructed post from the winter of 1804-05. Costumed guides help interpret the site and take visitors back to the days when furs were traded here under the British flag. The visitor center features exhibits, a great room with a large fireplace and gift shop.

The post was placed on the National Register of Historic Places on August 7, 1972.