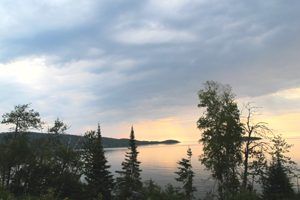 When the French ceded Canada to Great Britain in 1763, traders immediately began moving across the Canadian frontier to take advantage of the region’s wealth of resources forming trading companies throughout the Canadian Northwest. Among these was Simon McTavish’s North West Company, which from 1784 to 1803 was the most profitable fur-trading corporation on the Great Lakes. Although based in Montreal, Canada the company’s inland headquarters was on the Grand Portage, an 8.5-mile footpath that allowed travelers to bypass the Pigeon River Rapids. Known by the Ojibwe as the Kitchi Onigaming or Great Carrying Place by voyagers who lugged their canoes over the portage trail, this historic gateway into Canada’s fur country is part of the Grand Portage National Monument, which tells the stories of the American Indians and voyageurs of Minnesota’s Grand Portage.

Although the Cree, Sioux, Blackfoot, Beaver, and Chipewyan Indians are commonly associated with the fur trade in the Canadian Northwest, the Grand Portage was and continues to be the home of the Ojibwe Indians. Also known as the Anishinabe, the Ojibwe Indians reached the Grand Portage during the Anishinabe migration to Lake Superior in the 1600s. They were resourceful people, who in preparation for winter, began hunting, fishing, and gathering wild rice and other plants as early as the last days of the previous winter. Used for food, medicine, and clothing, these resources allowed the Ojibwe to survive the long winter months, which they endured while living inside peaked birch bark-covered lodges.

Approximately 20 feet long, 10 feet wide, and 7 feet high, these winter lodges were different from the traditionally cone-shaped lodges the Ojibwe used in the warmer months. The winter lodges were warmer, different in design, and built larger to accommodate up to three or more generations of the Ojibwes’ extended family. Both the warm weather lodges and winter lodges were made of birch bark. The Ojibwe also used the water-resistant birch bark to build their canoes, which were between 25 to 35 feet long and able to carry up to 12 people. The Ojibwe used the canoes for fishing, hunting, and for other purposes, and voyageurs and traders eventually began using them for their own commercial needs. 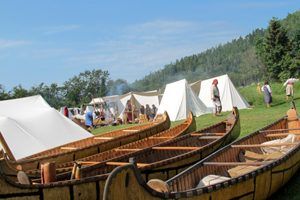 Once the Ojibwe taught French explorers how to build birch bark canoes, the lightweight and speedy canoes gave the voyageurs greater access to Canada’s fur-bearing animals and wilderness. The North West Company hired skillful voyageurs to transport furs and other goods between Montreal and the Canadian Northwest. To meet the demand for furs and to cover the territory between the Great Lakes and Canada’s extensive fur country, these voyageurs separated into two groups. The north men or “winterers,” covered the Northwestern territory in Canada. Their counterparts were the Montreal men or “pork eaters,” who navigated the Ottawa River and Great Lakes. Once the northern men completed their trade in the fur country, they returned to Lake Superior, where they met the Montreal men at the company’s inland depot at the Grand Portage.

Established in 1784, Grand Portage Depot was the largest fur trade post, where the “winterers” and “pork eater” voyageurs brought trade goods and gathered supplies. The depot structures did not survive after the post’s abandonment, but historic accounts offer insights into the daily life and overall design of the Grand Portage Depot. These accounts and archeological excavations provided a basis for reconstructing the depot. Among the reconstructed structures at Grand Portage National Monument today are the Great Hall, where company partners dined and talked business with Indians and clerks; the Kitchen located behind the hall; the Cedar-Picket Palisade and Warehouse that served as a secure storage facility; a fur press; and a lookout tower.

The North West Company’s Grand Portage Depot was the site of the annual gathering that allowed partners, clerks, traders, voyageurs, Indians, and anyone connected with the company to wait out the long winter months. Known as the Rendezvous, which in French means “a meeting or assembly,” this winter gathering was both a commercial and celebratory event. The Rendezvous was a great opportunity for trappers, traders, voyageurs, and Indians to display and trade furs, liquor, supplies, and other goods while dancing and feasting through the night. The partners and their guests usually ate and drank inside the Great Hall. The Ojibwe dressed in their ceremonial garb and the voyageurs in their best attire hosted their own celebration outside the palisade. 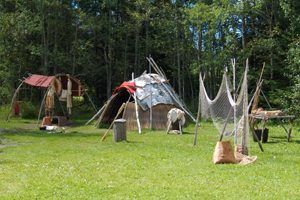 Visitors are encouraged to begin their tour at the Grand Portage National Monument Heritage Center. This new 16,600 square foot facility overlooks the reconstructed fur trading post and honors the history of the peoples of Grand Portage. The Heritage Center houses exhibit galleries interpreting Ojibwe culture and the history of the fur trade, a bookstore, multi-media programs, archives, and a classroom.

Grand Portage National Monument, a unit of the National Park System, is located within the Grand Portage Indian Reservation in Minnesota’s northeastern “Tip of the Arrowhead,” ½ to 1 mile south of the west and east exits from Minnesota State Highway 61 in the village of Grand Portage, Cook County, MN. 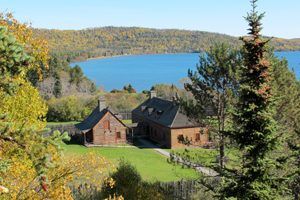