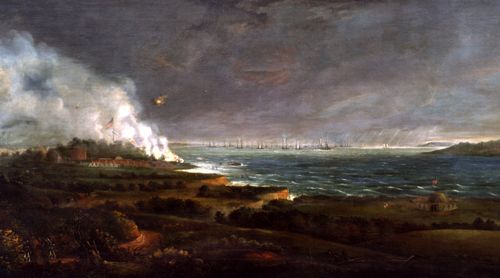 Bordering the busy waterfront of Baltimore, Maryland, is Fort McHenry National Park. The star-shaped fort is best known for its role in the War of 1812 when it successfully defended Baltimore Harbor from an attack by the British Navy in the Chesapeake Bay. It was during this bombardment of the fort that Francis Scott Key was inspired to write The Star-Spangled Banner, the poem that would eventually be set to music and become the national anthem of the United States.

During the American Revolution, Baltimore was an important naval center and in the spring of 1776, a battery of 18 guns was erected on Whetstone Point to guard the entrance to the harbor. This was the beginning of Fort McHenry. However, during the 1790s, the depredations of Algerian pirates and French interference with American commerce led Congress to authorize the construction of six frigates and the purchase of merchant vessels suitable for conversion into armed vessels.

In 1794, when the Government began a general program of fortification for the defense of the Atlantic Coast, the battery at Whetstone was offered by the city of Baltimore to the Federal Government “as a fort, or an arsenal for public defense.” Eight warships were built or outfitted in Baltimore, including the famous frigate Constellation, launched in 1797. Realizing the importance of proper protection for this important work, Baltimoreans urged the erection of a stronger fort. When told that the Federal Government could not expend more than $20,000 for this purpose, they raised funds to complete the present star fort, with walls 35 feet thick. Designed by Frenchman Jean Foncin, it was named for James McHenry, a Scots-Irish immigrant, and surgeon-soldier who had fought in the American Revolution and became Secretary of War under President George Washington. Construction began on Fort McHenry in 1798 and, by 1803; the masonry walls that still stand today were completed.

On June 18, 1812, the United States declared war on England, in part to “preserve Free Trade & Sailor’s Rights.” Known as The War of 1812, Baltimore ship owners quickly responded to a call from Congress for privateers to arm their swift sailing vessels and sent them out against the enemy. In an attempt to keep these privateers from sailing, the British blockaded Chesapeake Bay. However, the people of Baltimore were prepared and the British did not risk an attack until their fleet in the Chesapeake was heavily reinforced in the summer of 1814.

In August 1814, British forces marched on Washington, defeating the U.S. forces, and burned the Capitol. They then turned their sights on Baltimore. Sending a fleet of more than 50 ships up the Patapsco River, the British planned a combined attack against the city by land and water. 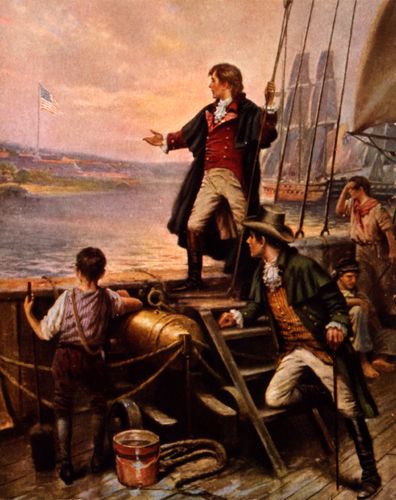 On September 13-14, the British attacked Fort McHenry. Though the British hurled more than 1,500 bombs weighing about 250 pounds each into the fort, they failed to create the destruction they had expected. The bombardment lasted continuously for more than 25 hours. The critical point of the struggle came at about 1 o’clock on the morning of September 14th, when the British tried to land 1,250 marines, carrying scaling ladders, in the rear of the fort. This movement was discovered, however, and the converging cross-fire from the fort and shore batteries further up the river forced them to abandon the attempt.

Francis Scott Key, an attorney, was on a British Troopship anchored a few miles away, negotiating the release of an American civilian. As dawn lit up the scene, Key could see the American Flag was still there, which inspired him to compose the first few lines of  “The Star-Spangled Banner.”

Following the War of 1812, new methods of coastal defense brought about changes including the addition of a second story with porches on the buildings and the completion of new earthen battery with larger guns.

During the Mexican-American War from 1846 to 1848, the fort served as a training base for federal units, before sending them to the southwest. 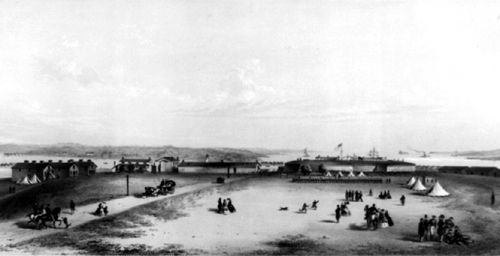 Fort McHenry in the Civil War

During the Civil War, Baltimore was an important rail and communications center. Union troops occupied both the fort and the city to ensure that Maryland remained in federal control. In 1861, several Maryland political figures that were suspected of being Confederate sympathizers were imprisoned at the fort to prevent them from inciting any acts of secession. Among the imprisoned were Baltimore Mayor George William Brown, the city council, and the police commissioner. Ironically, Francis Scott Key’s grandson, Francis Key Howard, was also one of these political detainees. The fort also served as an artillery training post and a military prison, where nearly 7,000 Confederate soldiers were held following the Battle of Gettysburg in 1863.

During the Spanish-American War in 1898, Fort McHenry served as a training post for the 6th U.S. Artillery before they were sent to Cuba. During this time, several other forts were built along the Patapsco River to protect the approach to Baltimore.

By the late 19th century Fort McHenry was of little military value and the last active garrison departed on July 20, 1912, ending over 110 years of service at the fort. However, the land was retained by the government and during World War I, the U.S. Army established General Hospital No.2 on the land in 1917.

The 3,000-bed facility treated wounded soldiers returning from Europe and developed into a major surgical center. After the war was over; however, the facility was no longer needed and the hospital closed in 1922. The army then began to remove the hospital buildings and in 1925, Fort McHenry was established as a national park under the War Department. Troops began the first restoration of the fort to its mid-nineteenth century appearance and in the 1930s, members of the Works Progress Administration continued the efforts.

In 1933, Fort McHenry was transferred to the National Park Service and in 1939, was designated as a National Monument.

During World War II, a portion of the fort was leased to the U.S. Coast Guard for port security work and as a fire training station aboard ships for nearly 28,000 U.S. Coast Guardsmen. They also kept a watchful eye on the nearby shipyards where Liberty ships were being built.

Today, the old star fort, with its officers’ and enlisted men’s barracks, its powder magazines, and sally port, is in an excellent state of preservation. The park welcomes nearly 600,000 visitors visit annually.

The Visitor Center includes an orientation film, exhibits, and a gift shop. Museum exhibits are displayed in several buildings, which include uniform and weapons displays, military memorabilia, videos, and more.

O say can you see, by the dawn’s early light,
What so proudly we hail’d at the twilight’s last gleaming,
Whose broad stripes and bright stars through the perilous fight
O’er the ramparts we watch’d were so gallantly streaming?
And the rocket’s red glare, the bombs bursting in air,
Gave proof through the night that our flag was still there,
O say does that star-spangled banner yet wave
O’er the land of the free and the home of the brave?

On the shore dimly seen through the mists of the deep
Where the foe’s haughty host in dread silence reposes,
What is that which the breeze, o’er the towering steep,
As it fitfully blows, half conceals, half discloses?
Now it catches the gleam of the morning’s first beam,
In full glory reflected now shines in the stream,
’Tis the star-spangled banner – O long may it wave
O’er the land of the free and the home of the brave!

And where is that band who so vauntingly swore,
That the havoc of war and the battle’s confusion
A home and a Country should leave us no more?
Their blood has wash’d out their foul footstep’s pollution.
No refuge could save the hireling and slave
From the terror of flight or the gloom of the grave,
And the star-spangled banner in triumph doth wave
O’er the land of the free and the home of the brave.

O thus be it ever when freemen shall stand
Between their lov’d home and the war’s desolation!
Blest with vict’ry and peace may the heav’n rescued land
Praise the power that hath made and preserv’d us a nation!
Then conquer we must, when our cause it is just,

And this be our motto – “In God is our trust,”
And the star-spangled banner in triumph shall wave
O’er the land of the free and the home of the brave. 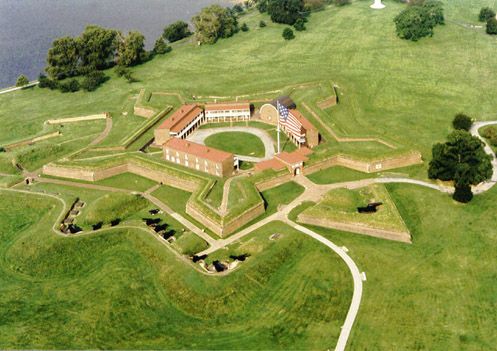 Compiled and edited by Kathy Weiser/Legends of America, updated March 2018.

The War of 1812 –  American Independence Confirmed

The Origin of Uncle Sam