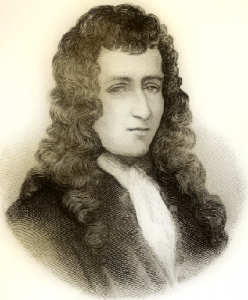 In 1682 Rene Robert Cavelier, Sieur de La Salle claimed Louisiana for France. Near the end of the 17th century, King Louis XIV considered another venture in the New World. In 1698 he commissioned Pierre Le Moyne, Sieur d’Iberville, and Jean Baptiste Le Moyne, Sieur de Bienville II, to implement La Salle’s original colonization plan for Louisiana. Iberville readied an expedition force and departed from Brest, France, on October 24, 1698. The expedition reached the vicinity of Dauphin Island on the Gulf of Mexico on January 31, 1699. Eventually, it settled near Biloxi, Mississippi, and later New Orleans, Louisiana. Iberville resolved to erect a number of forts and trading posts along the Mississippi River and its tributaries.

In order to carry out this decision the next year, Bienville led an exploration of the Red River to open trade with local tribes. Accompanied by Louis Juchereau de St. Denis, Bienville’s group reached the vicinity of Natchitoches and established friendly contacts with the Caddo tribes. In 1702 Iberville returned to France to obtain more settlers, supplies, and military equipment for the colony. 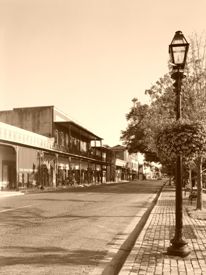 The disappointing progress of the colony of Natchitoches convinced King XIV to extricate himself from an unprofitable venture, an action accomplished by transferring Louisiana to the rich merchant Antoine Crozat, Marquis de  Chatel. On September 14, 1712, the king officially granted Crozat exclusive trading rights and governing rights in Louisiana for 15 years. Under terms of the royal charter, the French government accepted part of the colonial expenditures for nine years. Crozat planned to more fully exploit the agricultural and commercial potential of the colony.

In 1713, Crozat sent agents to revitalize trade with the Indians and to more efficiently administer colonial affairs. Among the agents dispatched was the new governor, Antoine de la Mothe, Cadillac. Cadillac, in 1714, requested that St. Denis, a leader of the earlier French exploration to the Red River Valley, return to that area for the purpose of establishing a French settlement. St. Denis chose the site that became the city of Natchitoches to construct Fort St. Jean Baptiste. Thus began the oldest permanent settlement in the present state of Louisiana (New Orleans was established in 1718). For many years this post served as an important strategic and trade center on the Red River. St. Denis was well suited for this task as he had both courage and tact and was well acquainted with the ways of the Indian frontier. During his tenure, St. Denis developed into a key figure in colonial affairs.

Cadillac’s administration succeeded in attracting new settlers to the colony, which resulted in the need to develop a well-defined land-grant system. The king in 1716 adopted a series of colonial land regulations, which stipulated that a land grant had to be cleared within two years or else revert back to the crown. In addition, the land was to be two-thirds cleared before the original grantee could sell it.

These land concessions were categorized as being either general or special. A general concession designated any portion of the vacant lands for development while a special concession provided fixed boundaries for land grants. Early grantees received between 50 and 100 arpents (approximately 190 feet to the arpent) facing the Red River. The decree of 1716 ordered unimproved land divided into sections of from two to four arpents, each in front and extending back from the river a distance of 40 arpents. This system allowed each landholder to have some of the good natural levee lands along with backswamp.

The river provided the focal point for settlement as it served as a transportation route upon which commerce and communication reached all parts of the colony. The presence of natural levees along the river led to the adoption of a linear settlement pattern, possibly based on European models, wherein the main structures of the plantations were found nearest the river, while the rear portions of the grants contained fields followed by swamps or woods. At river bends, this type of settlement pattern led to the formation of pie-shaped land holdings rather than the usual rectangular sections. These land patterns can still be seen in the Cane River area. 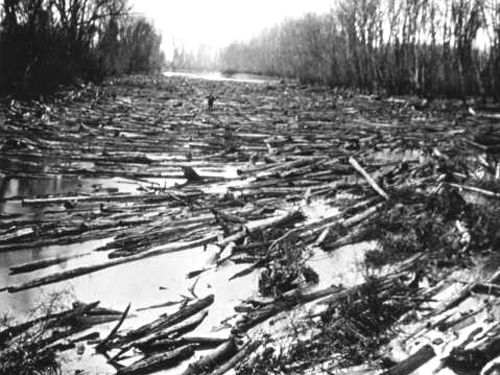 French Louisiana’s commercial activities centered around the Indian trade. Because of the proximity to Spanish Texas and the Indian nations, Natchitoches was ideally suited to a frontier market economy. Because a giant logjam called the Great Raft blocked Red River navigation above the settlement, Natchitoches was the northern terminus for traffic to and from downriver ports. In addition, the city’s location near the Spanish Camino Real, a major east-west overland route, further enhanced its growth as a trade center.

The French expansion in the Red River Valley caused concern among Spanish authorities in east Texas, and in 1717, they countered the French settlement with one of their own: the mission post of Los Adaes. Located 14 miles southwest of Natchitoches, this outpost eventually became the capital of Spanish Texas. Proximity, necessity, and mutual profit resulted in a lively contraband trade relationship between those two communities, despite the opposing mercantile policies of both governments. The Spanish needed tobacco, medicine, liquor, firearms, salt, and other goods obtained through the Red River trade, while the French provided a ready market for Spanish silver and cattle.

The Seven Years’ War, known in America as the French and Indian War, concluded in 1763 with the expulsion of France from North America. In 1762 during the course of the war, Spain was induced to enter on the side of France. The price for Spanish participation was the cession to Spain of Louisiana lands on the west bank of the Mississippi River, including Natchitoches and those lands on the east bank below Bayou Manchac. This agreement was formalized by the Treaty of Fontainebleau in 1762. The Treaty of Paris in 1763 further clarified the military and diplomatic results of the war.

The formal transfer of the colony from France to Spain did not occur until January 1767, and during this period resentment grew among the French settlers concerning Spanish administration of Louisiana. This displeasure resulted in a revolt against Spanish rule and the expulsion of the Spanish governor on November 1, 1768. For the next 10 months, the colony pursued an independent course free from any European control. The period of rebellious self-rule abruptly ended in July 1769, with the arrival at the mouth of the Mississippi River of a Spanish fleet carrying General Alejandro O’Reilly and an army of more than 2,000 soldiers. The rebellion quickly collapsed before this show of Spanish strength. This time Spanish authorities imposed Spanish law and government on the former French colony.

French fears of Spanish domination soon proved unfounded. The new regime caused little visible change in daily life. At Natchitoches, the Spanish retained the services of the French commandant, Anthanase De Mezieres, son-in-law of St. Denis and brother-in-law of the Duc d’Orleans. An able administrator and an expert in Indian affairs, De Mezieres played an important role in the development of the Louisiana-Texas border region during the following decade. De Mezieres’s Indian expertise was especially valuable as Spain had the difficult task of bringing the Louisiana tribes under their influence without starting a protracted and debilitating conflict.

In order to attract Indian commerce, De Mezieres persuaded the government to abandon the system of Indian control through missionary work and adopt the French method of trade and presents. By doing so, he succeeded in maintaining relative stability in the Red River Valley throughout the period of Spanish dominion.

Commercial agriculture based on tobacco and indigo production replaced earlier frontier economies, although animal skins and products remained a staple of the Natchitoches economy. During this time, farmers adopted the plantation system and formed large agricultural units worked by slave labor. By 1776, Natchitoches Parish had a slave population of nearly 4,000.

The king of Spain in the secret Treaty of San Ildefonso in 1800 ceded Louisiana back to France, an action reconfirmed in 1801 in the Treaty of Madrid. Actual transfer of Louisiana from Spain to France was delayed until November 1803. In the light of these developments, U.S. President Thomas Jefferson instructed his minister to France, Robert R. Livingston, to negotiate with French Emperor Napoleon Bonaparte for the purchase of Louisiana. This resulted in the Louisiana Purchase and France turning over Louisiana territory to the United States in December 1803. 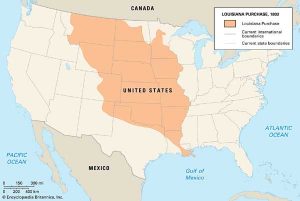 President Thomas Jefferson dispatched two exploration parties under Zebulon Pike and Thomas Freeman, respectively, to reconnoiter the Red River. Both groups were particularly interested in the area between Natchitoches and the Sabine River, which had been a disputed area between the French and Spanish. The border question was raised again with the U.S. purchase of Louisiana. In 1806, American forces established themselves east of Arroyo Hondo (a small stream just west of Natchitoches), with Spain forces on the west bank of the Sabine River. This created a “neutral strip,” which became a haven for outlaws, bandits, fugitive slaves, and filibusters gathering for the invasion of Texas. In 1821 a series of treaties resulted in the boundary between the two countries being fixed at the Sabine River. Soon the U.S. government established several new forts on the Louisiana frontier. Lieutenant Colonel Zachary Taylor commanded the Seventh Infantry to construct Fort Seldon, which was occupied for four months between 1821 and 1822 until a more strategic site was selected. The new site was 14 miles to the southwest and named Fort Jesup. Fort Jesup remained a significant American frontier post until the Mexican-American War.

After the area became part of the United States, plantation society, including the institution of slavery, flourished along the Red River for a number of reasons. In 1810 cotton was introduced into the Red River Valley, but prosperity came to the area with the twin technological developments of the steamboat and the cotton gin.

A series of events resulted in the decline of Natchitoches, including the removal of the log raft above the city by Henry Shreve and the subsequent establishment of Shreveport, which eventually superseded Natchitoches as a major port and trade center; the Red River’s gradual abandonment of the channel, which ran by the city and plantations in Natchitoches Parish; the westward expansion of the United States; and the American Civil War and its consequences. 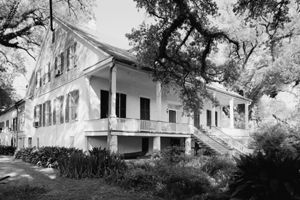 Control of Shreveport and the cotton supplies of the Red River Valley were the primary motivations for the Red River campaign, one of Louisiana’s most famous Civil War engagements. The campaign began in the spring of 1864 with a military force under Union General Nathanial Banks pushing Confederate forces under General Richard Taylor slowly north along the Red River. A series of skirmishes and battles were fought, which included areas near Cloutierville and Magnolia Plantation. This fighting culminated with the battle at Pleasant Hill. The Union forces retreated and the Confederates remained in control of the area until the end of the Civil War.

During a century of dominion, the French and Spanish left a lasting imprint on Louisiana: they introduced Catholicism, developed land use patterns, and initiated an economic system that superseded the one developed by Native Americans. In order to develop the colonial economy, the white settlers required both territorial control and the cooperation of the Indian populations. The French distributed gifts through Indian traders and agents in order to court local tribes; the Spanish used mission outposts. And for both nations, a small display of military force did much to ensure the security of their New World investments. Eventually, the increasing pressure of  European settlement and the European and American policies towards Indians resulted in the destruction of Indian lifeways and eventually their removal from the Cane River area.