The Capture Of The Hotel 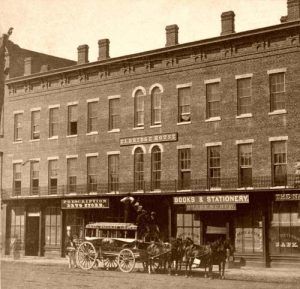 They dashed along the main street, shooting at every straggler on the sidewalk, and into almost every window. They halted in front of the Eldridge House. The firing had ceased and all was quiet for a few minutes. They evidently expected resistance here and sat gazing at the windows above them, apparently in fearful suspense. In a few moments, Captain Banks, Provost Marshal of the State, opened a window and displayed a white flag, and called for Quantrill. Quantrill rode forward, and Banks, as Provost Marshal, surrendered the house, stipulating the safety of its inmates.

At this moment the big gong in the hotel began to sound through the house to arouse the sleepers. At this, the whole column fell back, evidently thinking this the signal for an attack from the hotel. In a few moments, meeting with no resistance, they pressed forward again and commenced the work of plunder and destruction. They ransacked the hotel, robbing the rooms and their inmates. These inmates they gathered together at the head of the stairs, and when the plundering was done, they marched them across the street on to Winthrop street under a guard. When they had proceeded a little distance, a ruffian rode up, and ordered a young man out of the ranks, and fired two shots at him, but with no effect.

One of the guards at once interposed and threatened to kill the ruffian if one of the prisoners was molested. Quantrill then rode up and told them the City Hotel, on the river bank, would be protected, because he had boarded there some years ago and had been well treated. He ordered the prisoners to go there, and stay in, and they would be safe. The prisoners were as obedient to orders as any of Quantrill’s own men and lost no time in gaining the house of refuge. This treatment of the prisoners of the Eldridge House shows that they expected resistance from that point, and were relieved by the offer of surrender. They not only promised protection but were as good as their word. Other hotels received no such favors and had no such experience of rebel honor.

At the Johnson House, they shot at all that showed themselves, and the prisoners that were finally taken and marched off were shot a few rods of the house, some of them among the fires of the burning buildings. Such was the common fate of those who surrendered themselves as prisoners, Mr. R. C. Dix was one of these. His house was the nest door to the Johnson House, and being fired at in his own house, he escaped to the Johnson House. All the men were ordered to surrender. “all we want,” said a rebel, “is for the men to give themselves up, and we will spare them and burn the house.” Mr. Dix and others gave themselves up. They marched them towards town, and when they had gone about two hundred feet, the guards shot them all, one after another. Mr. Hampson, one of the number, fell wounded and lay as if dead till he could escape unseen. A brother of Mr. Dix remained in the shop, and was shot four times through the window, and fell almost helpless. The building was burning over his head, and he was compelled to drag himself out into the next building, which fortunately was not burned. The air was so still that one building did not catch from another.

Jayhawkers and Bushwackers fight it out over Kansas becoming a free state or a pro-slavery state.

After the Eldridge House surrendered, and all fears of resistance were removed, the ruffians scattered in small gangs to all parts of the town in search of plunder and blood. The order was “to burn every house, and kill every man.” Almost every house was visited and robbed, and the men found in them killed or left, according to the character or whim of the captors. Some of these seemed completely brutalized, while others showed some signs of remaining humanity. One lady said that as gang after gang came to her house, she always met them herself, and tried to get them talking. If she only got them to talk, she could get at what little humanity was left in them. Those ladies who faced them boldly fared the best.

It is doubtful whether the world has ever witnessed such a scene of horror — certainly not outside the annals of savage warfare. History gives no parallel, where an equal number of such desperate men, so heavily armed, were let perfectly loose in an unsuspecting community. The carnage was much worse from the fact that the citizens could not believe that men could be such fiends. No one expected an indiscriminate slaughter. When it was known that the town was in their possession, everybody expected they would rob and burn the tow, kill all military men they could find, and a few marked characters. But few expected a wholesale murder. Many who could have escaped, therefore, remained and were slain. For this reason, colored people fared better than whites. They knew the men which slavery had made, and they ran to the bush at the first alarm.

A gentleman who was concealed where he could see the whole, said the scene presented was the most perfect realization of the slang phrase, “Hell let loose,” that ever could be imagined. Most of the men had the look of wild beasts, they dressed roughly and swore terribly. They were mostly armed with a carbine and with from two to six revolvers strapped around them. 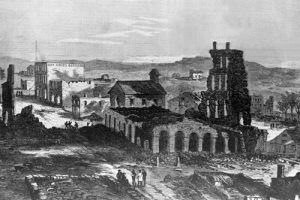 The surprise was so complete that no organized resistance was possible. Before people could fully comprehend the real state of the case, every part of the town was full of the rebels, and there was no possibility of rallying. Even the recruits in the camp were so taken by surprise that they were not in their places. The attack could scarcely have been made at a worse hour. The soldiers had just taken in their camp guard, and people were just waking from sleep. By some fatal mistake, the authorities had kept the arms of the city in the public armory, instead of in each man’s house. There could be no general resistance, therefore, from the houses. When the rebels gained possession of the main street, the armory was inaccessible to the citizens, and the judicious disposition of squads of rebels in other parts of the town prevented even a partial rally at any point.

There was no time nor opportunity for consultation or concert of action, and every man had to do the best he could for himself. A large number, however, did actually start with what arms they had towards the street. Most saw at once that the street could not be reached, and turned back. Some went forward and perished. Mr. Levi Gates lived about a mile in the country, in the opposite of that by which the rebels had entered. As soon as he heard the firing in the town, he started with his rifle, supposing that a stand would be made by the citizens. When he got to town, he saw at once that the rebels had possession. He was an excellent marksman, and could not leave without trying his rifle. The first shot he made the rebel jumped in the saddle, but did not kill him; and when he was dead brutally beat his head in pieces. 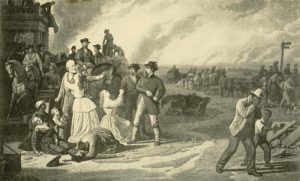 Mr. G. W. Bell, County Clerk, lived on the side hill overlooking the town. He saw the rebels before they made their charge. He seized his musket and cartridge box with the hope of reaching the main street before them. His family endeavored to dissuade him, telling him he would certainly be killed. “They may kill me, but they cannot kill the principals I fight for. If they take Lawrence, they must do it over my dead body.” With a prayer for courage and help he started. But he was too late. The street was occupied before he could reach it. He endeavored then to get round by the back way and come to the ravine west of the street. Here he met other citizens. He asked, “Where shall we meet?” They assured him it was to late to meet anywhere, and urged him to save himself. He turned back, apparently intending to get home again. The rebels were no scattered in all directions, and he was in the midst of them. A friend urged him to through his musket away, which he did. Finding escape impossible, he went into an unfinished brick house, and got up on the joists above, together with another man. A rebel came in and began shooting at them. He interceded for his friend and soon found that the rebel was an old acquaintance who had often eaten at his table. He appealed to him in such a way that he promised to spare both their lives, for old acquaintance sake if they would come down. They came down, and the rebel took them out to about twenty of his companions outside. “Shoot him! Shoot him!” was the cry at once. He asked for a moment to pray, which they granted, and then shot him with four balls. His companion was wounded and lay for dead, but afterward recovered. The treacherous rebel who deceived and murdered him afterwards went to his house, and said to his wife, who was ignorant of her husband’s fate: “We have killed your husband and now we come to burn his house.” They fired it, but the family saved it. Mr. Bell was a man of excellent character and left a wife and six children to miss and mourn him.

What little resistance was offered to the rebels, developed their cowardice, as much as their general license given them developed their brutality. On the opposite bank of the river, twelve soldiers were stationed. when the rebels first came into town, they filled Massachusetts street. They even attempted to cut the rope to the ferry. But these brave boys on the opposite side made free use of their rifles, firing at every butternut that came in sight. Their many balls went screaming up the street, and it was not many minutes before that section of the town was pretty much deserted; and if one of the ruffians by chance passed along that way, he was careful not to expose himself to the bullets from across the river. The result was, all that section of the town that stretched along the river bank was saved. In this section stood Governor Robinson’s house, which was inquired for. Here was the armory, which they took possession of early, but left it with the most of its guns unharmed.