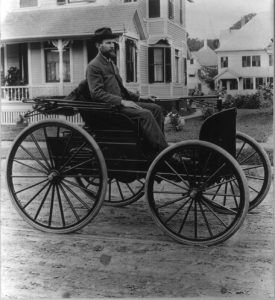 In the closing years of the 19th century, the fledgling automobile was such a novelty that a Duryea Motor Wagon warranted top billing over the albino, the giant, and the fat lady in promotions for the Barnum & Bailey Circus in 1896. Even astute businessmen such as Montgomery Ward saw the automobile as little more than a fad that would soon pass.

However, for a few visionary geniuses, the automobile was not a laughing matter, it was the future. In an interview published in Scientific American on May 21, 1892, Ransom E. Olds was quoted as saying about the automobile that, “…it never kicks or bite, never tires on long runs, and never sweats in hot weather. It does not require care in the stable and only eats while on the road.”

The persistence of men like Ransom Olds, and Alexander Winton, steadfastly moved the automobile from the realm of curiosity to multi-million-dollar business within a few short years, and by 1900 automobile mania was sweeping Wall Street and the world of high finance. The resultant industrial gold rush led the owners of established and profitable businesses to abandon everything in the quest to become an automobile manufacturer and tycoon. It also fueled a new breed of unscrupulous hucksters and unleashed the imagination of countless dreamers.

Peerless, a company that would rise to prominence as one of the nations leading manufacturers of luxury automobiles during the teens had its origins in the production of clothes wringers. With the explosion of bicycle popularity in the last decade of the 19th century, the company diversified production to include the two-wheeled wonders.

Herbert and Eugene Adams were a leading manufacturer of park benches and grave markers in Iowa during the 1880s. Diversification came with the manufacture of milling and foundry equipment. Their foray into automobile production was resultant of experiments in the development of internal combustion engines by company superintendent Fay Oliver Farwell. Promoted as the car with an engine that “spins like a top,” the Adams-Farwell of 1905 featured a rotary engine with cylinders and crankcase revolving horizontally on a fixed shaft.

In the summer of 1906, with $22,000 in capital stock, George M. Harton, W.F. Heninger, T.M. Harton, and C. MacKalip, incorporated the Amusement Company in Delaware. The sales pitch was that the company would manufacture, “nickelodeons, carousels, automobiles, and other amusements.” Apparently, the companies’ primary sales were of stock.

Even gullible investors eager to get in on the ground floor of the next big thing had their limitations. A.B. Andrews of Center Point, Iowa, in 1895, unsuccessfully sought investors for the development and manufacture of his Andrews Spring Motor Car, an automobile based on a spring-powered baby carriage designed a few years previously.

“The device is attached under the hind axle, one piece on each side. At each end are two main driving shafts, which mesh with cogwheels. The springs are wound with levers. By throwing on the winding gear the mechanism will wind itself up while going downhill…” 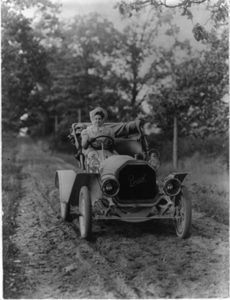 A woman sitting behind the wheel of a 1907 Buick

Benjamin Briscoe had made a fortune as a Detroit based sheet metal manufacturer. His initial endeavor in the automobile business was a bust; the namesake David Buick of the Buick Motor Company seemed incapable of moving from experimentation into the development of a product for sale, which left Briscoe with little more than a few experimental models to show for his sizable investment.

Undaunted by the financial bottomless pit that was Buick Motor Company, Briscoe divested himself of the company and joined forces with Jonathan Maxwell. The subsequent Maxwell-Briscoe was a roaring success, at least until Briscoe decided to use the company as a financial hinge pin in 1910 to launch United States Motor Company, a conglomerate envisioned as a challenger to General Motors.

Briscoe would rise from the ashes of the United States Motor Company still convinced that the automobile was the key to his financial future. Long after the swashbuckling era of automobile manufacturing, during a time of industry standardization, Benjamin Briscoe unleashed his vision of the future of the automobile with the establishment of Briscoe Motor Corporation in Jackson, Michigan in 1913.

The initial model was rather conventional, with the exception of Cyclops headlamp molded into the radiator shell. Another unusual feature was the laminated papier-mache body panels.

For the 1916 model year, the Briscoe had abandoned the quirky headlamp treatment for something more conventional. Still, this was not your ordinary automobile as evidenced by promotional material that proclaimed, “Buy the Four. Use it a month. If then you decide you want the Eight (a V-8), simply pay the difference and a small charge for installation work.”

Eager to invest in the new frontier of automobile manufacturing and development businessmen of all stripes eagerly looked for inventors in need of capital investment. As a result, in the first decades of the 20th century, almost every town in America had at least one automobile company.

Enid, Oklahoma was home to the Geronimo Motor Company, a short-lived enterprise that built automobiles as well as one-ton trucks and tractors. In Arkadelphia, Arkansas, it was called “Arkansas” in 1913, and in 1919, the Arkadelphia Motor Company.

In Boulder, Colorado, in 1909, it was with great fanfare that J.H. Wallace, W.E. Whitacre, and R. Linderman of the American Machine & Manufacturing Company announced the manufacture of automobiles would commence before years end. Then there was the Bison Motor Company – organized in Buffalo, New York to manufacture automobiles as well as marine engines.

How crazy was the gold rush atmosphere pervading automobile manufacturing during the first decades of the 20th century? Well, consider this:

In Birmingham, Alabama there were nine manufacturing companies organized. In Jackson, Michigan, the number was 22, in Butte, Montana, there were two, and even in Yazoo City, Mississippi, there was a company organized — Orr Modern Motor Car Company, a two-million-dollar incorporation in 1907.

From Baden, Missouri to Bettendorf, Iowa, from Azusa, California to Skagway, Alaska, inventors and dreamers had the ear of leading businessmen and manufacturers. However, the surprise is not that so many companies appeared on the industrial stage in such a short period of time, the surprise is how many survived, how many made invaluable contributions to the technological advancement of the automobile, and how many survived dramatic transitions and disasters.

Even the great American icon that is Chevrolet had its origins in some surprisingly diverse endeavors and barely survived a few very serious missteps. Named for Swiss-born Louis Chevrolet, the company was conceived by William Durant as a means to capitalize on the Chevrolet name made popular with Louis’s record of racing victories, and as the tool for him to regain control of General Motors.

In 1923, the car later linked with hot dogs, baseball, and apple pie was the victim of an experiment gone wrong and corporate politics that resulted in the first major recall ever issued by a major automobile manufacturer. The saga of the air-cooled Chevrolet is, however, a story for another day.