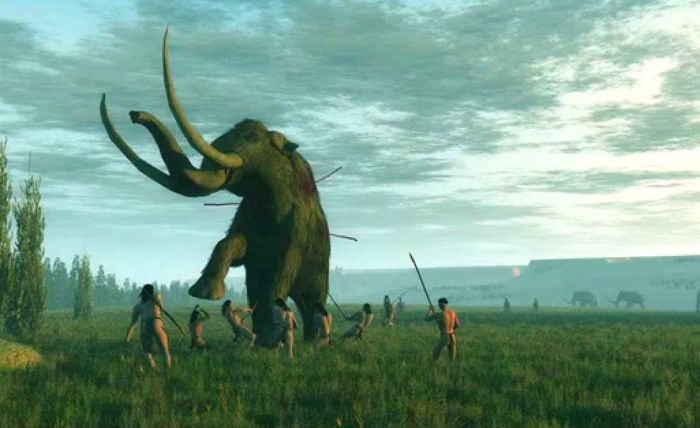 The Clovis culture is a prehistoric Paleoindian Period culture, named for distinct stone tools found near Clovis, New Mexico, in the 1920s and 1930s.

What is known about the Clovis people comes from the remains they left behind, including bone and ivory tools such as scrapers, drills, blades, and distinctive leaf-shaped, fluted spear points called Clovis points. These four-inch-long projectile points, carefully chipped from flint, jasper, chert, and obsidian, have concave grooves down each side, very sharp edges, and a lance-shaped tip. The Clovis culture is estimated to have occurred between 13,500 BC to 11,000 BC at the end of the last glacial period. However, in October of 2020, Texas A&M researchers announced that new testing showed that Clovis tools were made only briefly during a 300 year period from 13,050 to 12,750 years ago.

In 1932, an archaeologist named Edgar Howard excavated a long stone tool from a bed of mammoth bones at an archaeological site between Clovis and Portales, New Mexico. For years, evidence suggested an ancient culture in North America that long predated the assumed range of human occupation in the continent. But, before this time, spear points could not be accurately dated. However, that changed when Howard found a Clovis point in the ribcage of a mammoth because the bones could scientifically be dated. The dig in New Mexico continued until 1937. The archaeological site called Blackwater Locality No. 1 has since been a focal point for scientific investigations by academic institutions and organizations from across the country. Today, the 3,200-acre Anderson Basin district around Blackwater Draw in Roosevelt County, New Mexico, is owned and managed by the Eastern New Mexico University. It was declared a National Historic Landmark in 1961 and incorporated into the National Register of Historic Places in 1966. The Blackwater Draw Museum houses the artifacts collected from the site and displays materials from other collections owned by Eastern New Mexico University. The Museum is located at 1457-1461 S Avenue K on the Eastern New Mexico University campus in Portales, New Mexico.

After this find in New Mexico, other Clovis sites have since been identified throughout much of the United States, Mexico, and Central America, and even into northern South America. 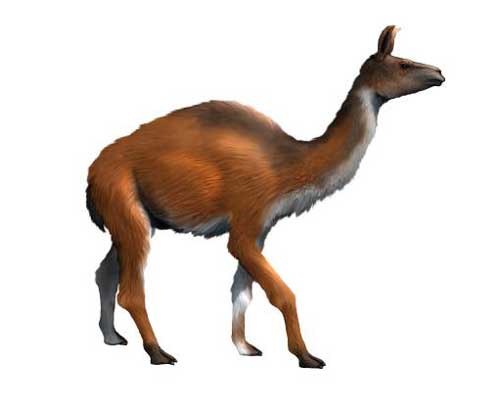 Camelops is an extinct type of camel that lived in Western North America.

It is generally accepted that the Clovis people hunted mammoths and other large game, including extinct bison, mastodon, gomphotheres, sloths, tapir, camelops, and horses other smaller animals. They were also gatherers and subsidized their diets with edible seeds, nuts, plant roots, and fishing.

The Clovis culture was replaced by several more localized regional societies following a cold-climate period that returned much of the continent to glacial conditions that caused a decline in large animal populations and a less mobile society. This “cold shock” lasted about 1500 years, affected many parts of the world, including North America. During this time, the Clovis-style fluted points were replaced by other fluted-point traditions, such as the Folsom culture.

Genetic and linguistic tests of modern Native Americans suggest the Clovis people descended from Siberia and Mongolia. Only one human skeleton was found — a one-year-old boy in Anzick, Montana, who tested as a Siberian descendant. Like other Paleoindians, they probably originally crossed the Bering Land Bridge, connecting Siberia and Alaska, and over the years spread across North America. In later years, archaeologists searched for similar stone tools in Siberia and Mongolia, but none were ever found. So it seems that the Clovis point was the unique invention of the Clovis people in North America.

After discovering several other Clovis sites, the Clovis people came to be regarded as the first human inhabitants who created a widespread culture in the New World. However, this theory was later challenged by several other archaeological discoveries, including sites such as Cactus Hill in Virginia, Paisley Caves in the Summer Lake Basin of Oregon, the Topper site in Allendale County, South Carolina, Meadowcroft Rockshelter in Pennsylvania, the Friedkin site in Texas, and two sites in Chile, South America that may date back as far as 30,000 years. The oldest Clovis site in North America is El Fin del Mundo in northwestern Sonora, Mexico, which appears to date back to 11,330 BC. The Aubrey site in Denton County, Texas, produced an almost identical radiocarbon date.

More than 10,000 Clovis points have now been found in 1,500 locations throughout most of North America, from southern Canada to Central America, all dating simultaneously with the oldest points found in Texas.

The Clovis culture irrevocably changed Native American life in a short time span, and the Clovis people are considered the ancestors of most of the indigenous cultures of the Americas today. 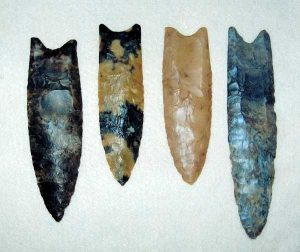