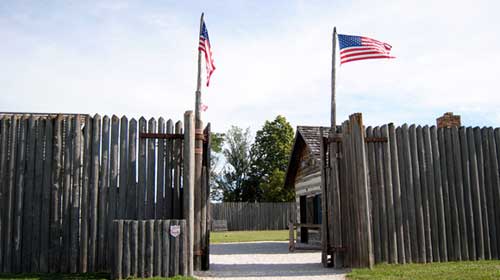 The area where Fort Dodge would be built had long been called home to the Sioux, Winnebago, and Sac and Fox tribes before Iowa became a part of the Louisiana Purchase in 1803. Up until the time that Lewis and Clark came through in 1805, the region was only known to the American Indian tribes and French fur traders. Following the Lewis and Clark expedition, however, many others would begin to come upon the land in search of settlement, to establish relations with the Indian tribes, and to survey the lands for the U.S. Government.

One of the first in-depth explorations of what would become the Fort Dodge area was made in 1835 by three companies of the 1st U.S. Dragoons led by Lieutenant Colonel Stephen Kearny. With the objective of identifying future sites for military posts, the men traveled up the Des Moines River, through southern Minnesota before heading south to the Fort Dodge area. When they came upon Lizard Creek, they noted how the site would be suitable for a potential fort along the Des Moines River. 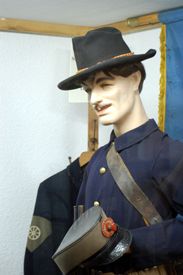 Fifteen years later this same route was followed by another body of United States soldiers under the command of Brevet Major Lewis Armistead with orders to establish a fort at the mouth of the Lizard Creek. The purpose of building the post was at this location was primarily due to the annoyance which the Indians had caused the early settlers and the fear that they might do worse.

A few years more and a stage line would follow the same path the soldiers had taken, which would become known among the early settlers as the “Dragoons’ Trail.”

Armistead, who had scouted the area earlier, chose the very site that was recommended by the Dragoons 15 years earlier. Overlooking the junction of the Des Moines River and Lizard Creek, the site offered good water, timber, and stone for building. Armistead led in the construction of the post and brought in a steam sawmill to speed up the work. Armistead’s soldiers were soon joined by more troops dispatched from Fort Snelling, Minnesota to help with the building of the military post. By hiring additional civilian laborers, 12 buildings were completed by November 1850. The post was first named Fort Clarke in honor of the commanding officer of the 6th Infantry. However, they soon found out there was another fort in Texas with the same name, so the next spring it was renamed Fort Dodge in honor of Colonel Henry Dodge, the U.S. Senator of Wisconsin Territory (which included Iowa at the time) and the founder of the Dragoons. 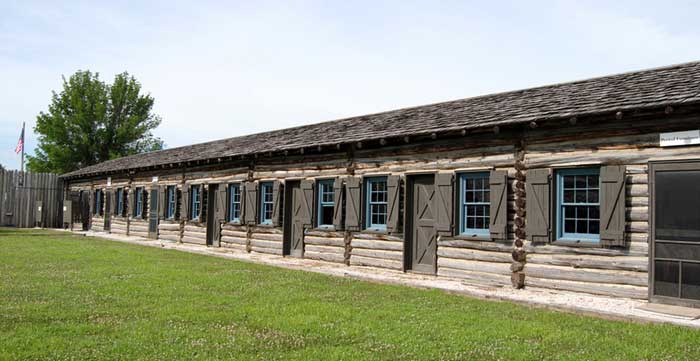 During the life of the fort, day to day life for the soldiers was fairly routine and never involved any combat. In fact, when they weren’t drilling or tending to the post, they were primarily involved in keeping trespassers off the Sioux lands, finding bootleggers and pursuing military deserters. At that time, deserters from the post were frequent as the lure of the California Gold Rush was strong. For entertainment, the soldiers primarily spent their time hunting, drinking, and gambling.

Just three years after it was established the post was decommissioned and the soldiers were ordered to Minnesota to establish Fort Ridgley. The next year, William Williams, the post’s sutler, acquired the buildings and the military post and soon would plat the City of Fort Dodge. However, it would be years before the “town” was officially established.

The post was originally located on 1st Avenue North. Today, the reconstructed Fort Museum and Frontier Village are located on the southwest edge of Fort Dodge. It is a full-scale recreation of a military outpost on the prairie from the 19th century and also features a reconstructed village from the same time period.

The only remaining cabin from the fort which established Fort Dodge is dedicated to Lewis A. Armistead, a confederate general killed at Pickett’s Charge during the Battle of Gettysburg. Prior to joining the confederacy, Armistead served as Quartermaster at Fort Dodge. Another special exhibit building tells the story of the Cardiff Giant, one of the most famous hoaxes from the 19th century which was carved from gypsum mined near Fort Dodge. 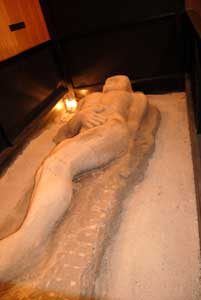 A replica of the Cardiff Giant is on display at the Fort Museum & Frontier Village in Fort Dodge Iowa. Photo by Kathy Weiser-Alexander.

The Cardiff Giant – A Sucker Born Every Minute