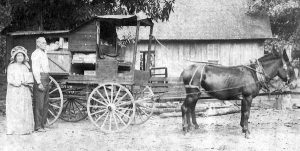 An old man named Daniel Baker, living near Lebanon, Iowa, was suspected by his neighbors of having murdered a peddler who had obtained permission to pass the night at his house.

This was in 1853, when peddling was more common in the Western country than it is now, and was attended with considerable danger. The peddler with his pack traversed the country by all manner of lonely roads and was compelled to rely upon the country people for hospitality.

This brought him into relation with queer characters, some of whom were not altogether scrupulous in their methods of making a living, murder being an acceptable means to that end. It occasionally occurred that a peddler with a diminished pack and swollen purse would be traced to the lonely dwelling of some rough character and never could be traced beyond.

This was so in the case of “old man Baker,” as he was always called. A peddler came to his house and none went away–that is all that anybody knew.

Seven years later the Reverend Mr. Cummings, a Baptist minister well known in that part of the country, was driving by Baker’s farm one night. It was not very dark: there was a bit of moon somewhere above the light veil of mist that lay along the earth. Mr. Cummings, who was at all times a cheerful person, was whistling a tune, which he would occasionally interrupt to speak a word of friendly encouragement to his horse.

As he came to a little bridge across a dry ravine he saw the figure of a man standing upon it, clearly outlined against the gray background of a misty forest. The man had something strapped on his back and carried a heavy stick — obviously an itinerant peddler. His attitude had in it a suggestion of abstraction, like that of a sleepwalker. Mr. Cummings reined in his horse when he arrived in front of him, gave him a pleasant salutation and invited him to a seat in the vehicle — “if you are going my way,” he added. The man raised his head, looked him full in the face, but neither answered nor made any further movement. The minister, with good-natured persistence, repeated his invitation. At this, the man threw his right hand forward from his side and pointed downward as he stood on the extreme edge of the bridge. Mr. Cummings looked past him, over into the ravine, saw nothing unusual and withdrew his eyes to address the man again. He had disappeared. 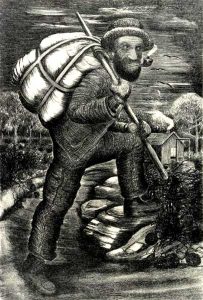 The horse, which all this time had been uncommonly restless, gave at the same moment a snort of terror and started to run away. Before he had regained control of the animal the minister was at the crest of the hill a hundred yards along. He looked back and saw the figure again, at the same place and in the same attitude as when he had first observed it. Then for the first time, he was conscious of a sense of the supernatural and drove home as rapidly as his willing horse would go.

On arriving at home he related his adventure to his family, and early the next morning, accompanied by two neighbors, John White Corwell and Abner Raiser, returned to the spot. They found the body of old man Baker hanging by the neck from one of the beams of the bridge, immediately beneath the spot where the apparition had stood. A thick coating of dust, slightly dampened by the mist, covered the floor of the bridge, but the only footprints were those of Mr. Cummings’ horse.

In taking down the body the men disturbed the loose, friable earth of the slope below it, disclosing human bones already nearly uncovered by the action of water and frost. They were identified as those of the lost peddler. At the double inquest, the coroner’s jury found that Daniel Baker died by his own hand while suffering from temporary insanity and that Samuel Morritz was murdered by some person or persons to the jury unknown.

Excerpted from the book Present at a Hanging and Other Ghost Stories, by Ambrose Bierce, 1913, now in the public domain. Ambrose Bierce was the author of several supernatural stories as well as tales of the Civil War, which he drew from his own experience as a Union cartographer and officer.  Bierce worked as a journalist and editor for the San Francisco News-Letter and California Advertiser.  In 1913, at the age of seventy-one, Bierce disappeared into revolution-torn Mexico to fight alongside the bandit Pancho Villa. Although a popular theory is that Bierce argued with Villa over military strategy and was subsequently shot, he probably perished in the battle of Ojinaga on January 11, 1914.