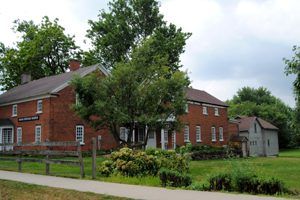 The Amana Colony, a historic utopian society located in the rolling hills of Iowa’s River Valley, was established shortly before the Civil War by a group of German-speaking European settlers who belonged to a religious group known as the Community of True Inspiration. Here, they began a communal system of living in seven different villages, which encompassed over 20,000 acres of land.

These various villages originally consisted of 40 to 100 buildings, many of which continue to stand today. Among the colonies can be found dozens of buildings that are elegantly simple and reflect the distinctive architecture of communal Amana, a period that lasted from 1855 to 1932.

The first Community of True Inspiration traces its origins to Heimbach, Germany in 1714. Community founders J.F. Rock (1678-1749) and E.L. Gruber (1665-1728) were among many Europeans seeking a more meaningful religious experience than they felt the established churches provided. Like many others, Rock and Gruber maintained that the Lutheran Church had become bogged down in intellectual debate and formalized worship, which neglected the spiritual needs of the congregation. An increasing desire to return to biblical doctrine with an emphasis on individual piety gained popularity. The Community of True Inspiration was one of several groups that emerged from Pietism. 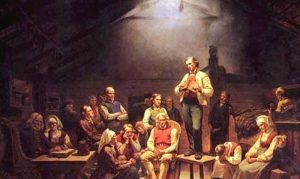 The Inspirationist beliefs attracted many followers, and congregations were established throughout Germany and surrounding regions. Because Inspirationists declined to perform military duty, take state-required oaths, or send their children to church-run schools, the congregations were often in conflict with church and governmental authorities. Many members of the Community of True Inspiration were punished with fines, imprisonment, and public beatings. Nevertheless, the Inspirationist movement flourished through the mid-18th century. However, by 1750, both Rock and Gruber were dead and the movement declined and faded in the midst of European wars and economic depression.

War and famine, compounded by sweeping social and economic changes, devastated Germany in the early 1800s. Farmers and craftspeople were affected by high rents, taxes, and a new wave of industrialization. Many people, including a tailor named Michael Krausert, took comfort in religion. After studying the words of J.F. Rock in 1817, Krausert revitalized the Community of True Inspiration. He was soon joined by two others, Barbara Heinemann and Christian Metz. Metz emerged as the guiding force of the community during its crucial years of growth and relocation to America. 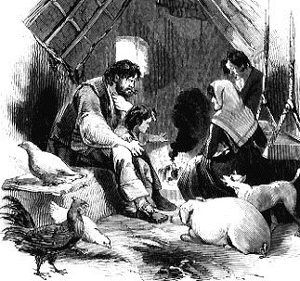 During the 1820s and 1830s, Metz consolidated the community in the relatively liberal province of Hesse-Darmstadt in Germany. Congregations from Germany, Switzerland, and France moved to join the new communities in Hesse. The community leased large estates and castles within a few miles of each other. Both rich and poor lived together and shared in the social and economic life of the group. Although not communal, this arrangement helped to predispose the Inspirationists to the formal communal system which would be established in America and Amana.

By 1840 there were nearly 1000 members of the Community of True Inspiration, many living on the estates in Hesse. This growth took place in spite of persecution from German officials. The government, closely tied to the Lutheran church, viewed the Community’s theology as a political threat. Even in Hesse, Inspirationists were fined for their refusal to send children to state schools. Rising costs and several years of drought aggravated the conditions on the estates, causing Metz and other leaders to realize that they must seek a new home for the community.

In September 1842 a committee led by Christian Metz traveled to America in search of land on which to relocate the Community of True Inspiration. They purchased a 5,000-acre site near Buffalo, New York and by the end of 1843 nearly 350 Inspirationists had immigrated to the new settlement, which they named “Ebenezer,” meaning “hitherto hath the Lord helped us.” 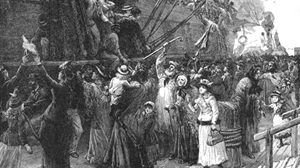 From the start, in order to facilitate all members of the community to come to America and live together, all property in Ebenezer was held in common. The initial plan was that after some time, the land would be divided among the people according to their contribution of money and labor. However, leaders saw that the disparity in wealth, skills and age would make it difficult for all to purchase a portion of land and the community would fall apart as a result. Therefore; in 1846, a constitution was adopted which established a permanent communal system. Any debate on this was resolved when Metz spoke a divine pronouncement endorsing the communal system.

Ebenezer flourished. By 1854 the population reached 1,200 people. Six villages were established, each with mills, shops, homes, communal kitchens, schools, and churches. To accommodate this growth, additional land was purchased, but, more was needed. However, the booming growth of nearby Buffalo put land prices at a premium. In addition, the community leaders perceived a threat from the economic development around them. It was felt that capitalist and worldly influences were bringing about a growing interest in materialism and threatened the spiritual focus of the Inspirationist community. The leadership decided it was time to move the community again – this time to the unsettled west. 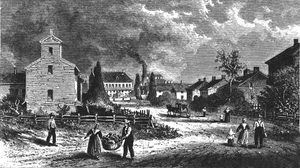 After investigating sites in Kansas and Iowa, the True Inspirationists selected a location along the Iowa River Valley about 20 miles west of Iowa City, Iowa for the relocation of their community. This site offered extensive timberland, quarries for limestone and sandstone, and long stretches of prairie filled with rich, black soil. Construction of the first village began in the summer of 1855 and the new settlement was named “Amana,” meaning “believe faithfully.” Community members moved to Amana over the next ten years as they gradually sold parcels of the Ebenezer property. A new constitution was adopted as the Community of True Inspiration took on the legal identity of the Amana Society. This new constitution essentially retained the communal system which had been developed in Ebenezer.

All members of the community shared in its economic success. The community provided each family with a home and all necessities of life. No one received a cash income. Rather, everyone was given an annual purchase allowance at the general store where goods were priced at cost. Medical care was provided free by the community. In return, each person was expected to work and was assigned a job by the community Elders based on the needs of the community, as well as the talents of the individual. Nearly all women, starting at about age 14, worked in the communal kitchens and gardens. Women also tended to laundry, sewing, and knitting and a few worked at the woolen mills. Men’s jobs were far more varied. Young men might learn to work in one of the many craft shops, in the mills, or on the farms. Some men were sent outside the community to be educated as doctors or pharmacists. 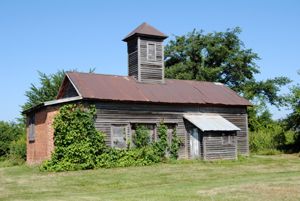 Homestead in the Amana Colonies of Iowa by Kathy Weiser-Alexander.

By the 1860s the Amana Colony, as it came to be known, consisted of over 20,000 acres of land on which seven villages had been established. The villages were spaced just a few miles apart, roughly in the shape of a rectangle, and were named according to their location: West Amana, South Amana, High Amana, East Amana, and Middle Amana, in addition to the original village of Amana. The town of Homestead, little more than a few buildings, was purchased by the Inspirationists so that they could have a depot on the new railroad line.

Amana villages each consisted of 40 to 100 buildings. The barns and agricultural buildings were always clustered at the village edge. Orchards, vineyards, and gardens encircled the villages. Typical houses were rectangular two-story buildings of wood post-and-beam construction, brick, or sandstone. Each village had its own church, school, bakery, dairy, wine cellar, craft shops, and general store. There were also a number of communal kitchens in each village where groups of about 30-40 people ate their meals.

Although all Amana villages are similar, each has its distinctive aspects. The original village of Amana, for example, is reminiscent of a German town with its meandering main street and side streets. On the other hand, the last village built — Middle Amana — displays a very American square block layout. South Amana is known for its predominance of brick construction–boasting even a brick granary and chicken house; in West Amana and High Amana, sandstone buildings prevail. Tiny East Amana was not much more than an agricultural outpost, while Amana hummed with industry. The railroads’ influence on the villages is evident in Homestead’s single street and the split in South Amana — upper and lower.

The Amana settlement pattern of seven villages allowed the Inspirationists to easily access all their farmland. Just as importantly, it avoided a large urban setting which they felt encouraged immorality. Still, the network of small villages maintained an overall unity and kept everyone close to spiritual leadership.