Sixteen miles west of Groom, Texas, is the ghost town of Conway. The last town on the Mother Road before reaching Amarillo, Conway began as a very small sheep and ranching community in the late 1800s. In 1892, the Lone Star School, said to be the first rural school that endured in the Panhandle, was established for the children of area ranchers and homesteaders.

The settlement changed and grew when the Choctaw Route of the Chicago, Rock Island, and Gulf Railroad came through in 1903. The same year, a post office was established, and the town was named for former Carson County Commissioner H. B. Conway. The town was platted in 1905 by brothers Delzell and P.H. Fisherin, and one of its first businesses was a store run by Edward S. Carr, into which the post office moved in 1907. A railroad depot, a grocery store, and a blacksmith shop were soon added, and a steam-operated threshing machine served area wheat farmers. An interdenominational community church was erected in 1912.

During the 1920s, agriculture in the Texas Panhandle boomed, and the oil industry boosted the local economy. That same decade Conway formed a community club and began an annual community fair. In 1925, Conway’s population was just 25 residents. 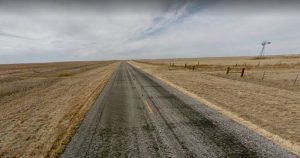 In 1926, Route 66 was designated through the Texas Panhandle, but the route remained in dispute in Carson and Potter Counties east of Amarillo. It wasn’t finalized until August 1930, when the Amarillo Daily News declared the “U.S. 66 Highway Tangle Solved.” Federal officials then approved the highway between the town of Conway to the Potter County line along a route north of the Chicago, Rock Island & Pacific Railroad. Local residents were jubilant over the announcement as the dispute over its location had delayed the paving of a ten-mile section of the roadbed. Before the end of 1930, it had been paved and was opened to Amarillo.

After Route 66 was completed through the area, Conway soon responded with various services for travelers, including tourist courts, restaurants, and service stations. In 1930, a new brick school was built in the town, and by 1939, Conway had grown to about 125 people. 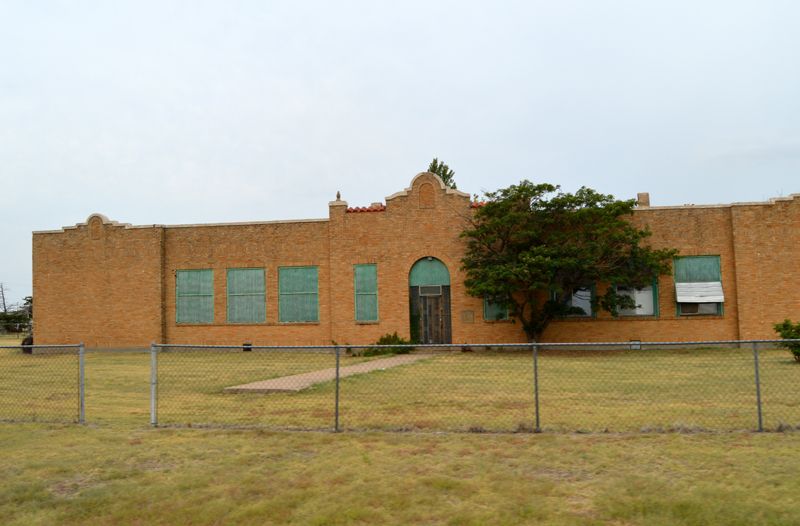 The old 1930 school in Conway, Texas, is boarded up today, Kathy Alexander.

Just a little more than a decade after the school was built, the district was consolidated in 1943, and students were bussed to Panhandle, about 9.5 miles to the north. The school building then became a community center.

In 1967, the Crutchfield family opened a roadside service station, a curio shop called the Longhorn Ranch, and an attraction called the Rattlesnake Ranch to draw people in from the new highway. It was located just off the interstate, at Exit 96 near Texas Highway 207. The timing must have looked good because Conway’s population peaked in 1969 at 175 people.

But, after the town was bypassed, people began to move, and businesses failed. In 1970, the town reported a population of just 50 people. However, it still supported two grain elevators, four service stations, three cafes, and a general store. Conway’s post office closed its doors forever in 1976, and the railroad terminated its operations in 1980. By the year 2000, the population of Conway had dropped to just 20 people. 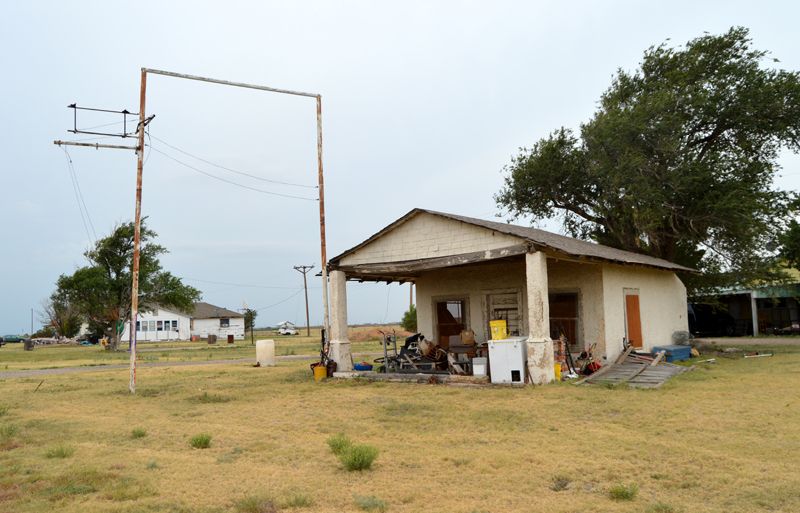 Old service station on the original portion of Route 66 in Conway, Texas by Kathy Alexander, 2018.

In 2002, a Love’s Travel Stop truck stop was established at the same exit on the north side of the highway, drawing people away from Crutchfield’s station. To combat this, the family created another roadside attraction to lure customers: the VW Bug Ranch. Making a parody of the Cadillac Ranch on the west side of Amarillo, five Volkswagon Beetles were buried nose down in the ground, and signs were erected announcing the “Bug Ranch.” They soon received some publicity and drew in more visitors. But it wouldn’t be enough. In 2003, the Rattlesnake Ranch, the curio shop, and the gas station were closed, and the Crutchfields moved away.

Within no time, the brightly painted yellow “bugs” were sprayed with graffiti, like their counterparts at the Cadillac Ranch. 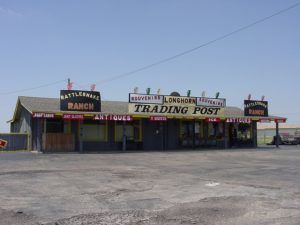 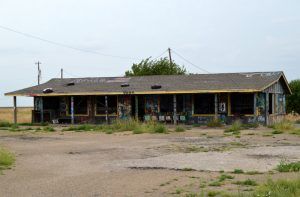 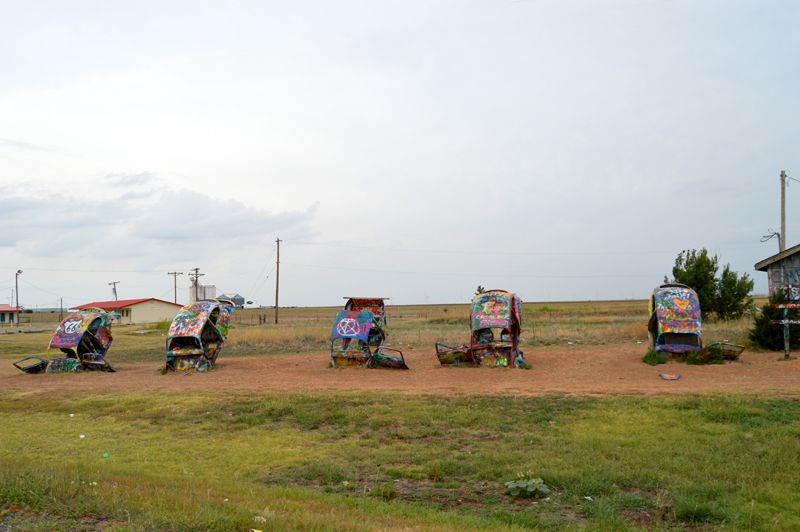 Today, Conway’s old school is boarded up, with no sign of a church having ever existed, the Crutchfield’s Longhorn Ranch and service station are vandalized, and in ruins, former buildings that once stood are now lying on the ground. The tiny town is called home to just a handful of people. However, two motels continue to operate at the Conway exit – the Executive Inn at 9680 Interstate 40 Frontage Road and just to the east, the Conway Inn at 9696 Interstate 40. Both have restaurant buildings, but neither appears to be open.

To continue the Route 66 journey, return south to the intersection of Texas Highway 207 and FM 2161 at the grain elevators in the old part of Conway to the south of I-40 and turn west. This stretch of pavement, which runs for 7.2 miles before rejoining I-40, was listed on the National Register of Historic Places in 2007 because it is the longest and best-preserved section of Route 66 in Texas. Though local traffic still uses the road, the abandoned railroad bed, the lack of modern buildings, the open rangeland, and the sheer quiet capture the feel of old Route 66 like few other places. Even the couple of concrete grain elevators along the route date to 1914.

After transversing this old piece of pavement, continue your tour of Route 66 by joining I-40 and continuing west to Business I-40, then northwest to Business I-40/US 60 as it turns back to the southwest and merges with Amarillo Boulevard. On US Highway 60, you’ll pass by the old Amarillo Air Force Base property, now occupied by Amarillo College, through which the old pavement once traversed. You’ll also pass by the old English Field, Amarillo’s first airport. 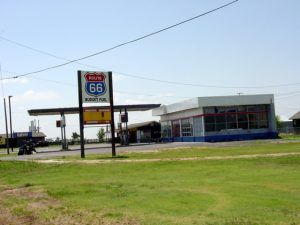 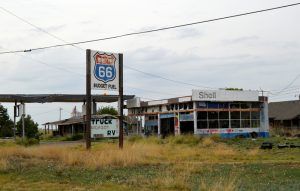 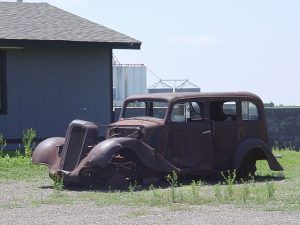 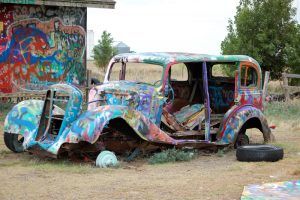 To Amarillo Air Force Base